The foreign policy of the Trump administration has differed little from the foreign policy of previous administrations. Indeed, there is a large gap between the rhetoric before Donald Trump’s election and what has actually happened since he took office. But this should be expected. Presidents aren’t kings. The founders created a system designed to limit the president’s ability to make radical shifts.

The United States’ policy toward Russia has remained largely unchanged. The same tensions with Europe still exist. The approach toward North Korea is an extension of policies that have been in place since the Clinton administration. And relations with China and Mexico have also remained consistent.

But one place that I personally did expect change was in the Middle East, particularly in Afghanistan, where a war has been waged for 16 years. The original goal was to destroy al-Qaida’s command structure in the country. This was the group that had planned the 9/11 attacks. In the process, it was inevitable that the Taliban regime, which provided sanctuary for al-Qaida, would be displaced. But after displacing the Taliban, the U.S. faced other problems, including a dysfunctional government in Kabul. The Taliban had won an intense civil war in the 1990s, and any government that would take their place would come from a faction that had been too weak to defeat the Taliban in the first place. 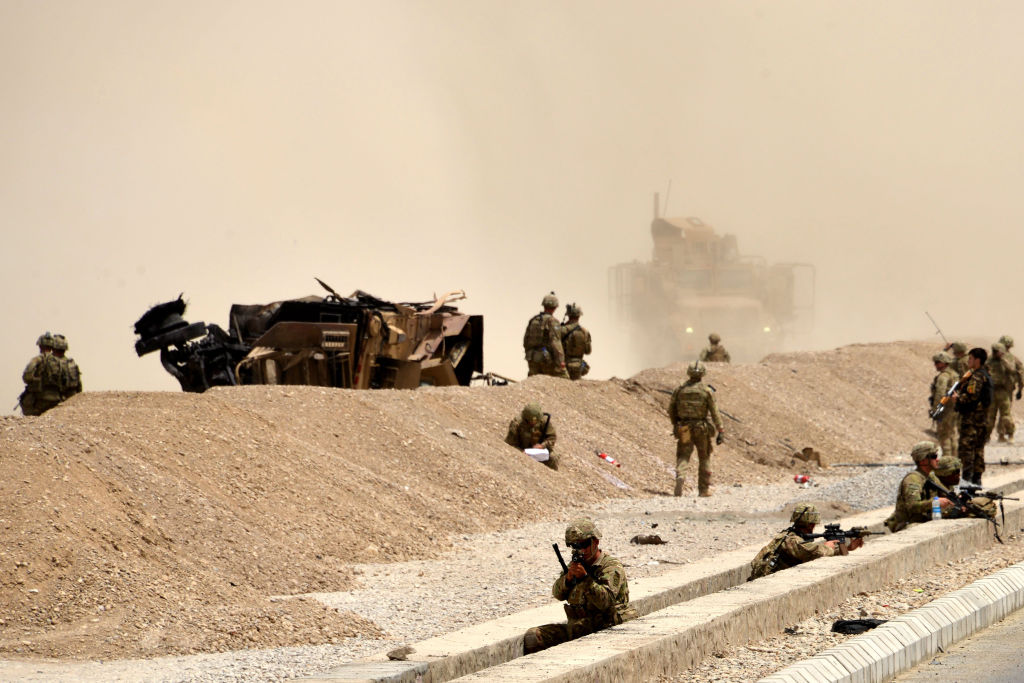 U.S. soldiers keep watch near the wreckage of their vehicle at the site of a Taliban suicide attack in Kandahar on Aug. 2, 2017. JAVED TANVEER/AFP/Getty Images

The U.S. needed to create a new government and essentially impose Hamid Karzai as president. The Karzai government, however, was in no position to rule Afghanistan; it had no army and no police force, and it lacked the basic bureaucracy needed to govern the country.

Another problem was that the U.S. hadn’t completely defeated the Taliban. In the face of intense American bombardment, they abandoned their positions in the cities, retreated, dispersed and, in due course, regrouped. Divided into factions, many of which existed while they governed, the Taliban were able to continue waging war against the Afghan government.

The United States had two choices. The first was to scale back its involvement and either leave or retreat into very small enclaves from which it could conduct targeted operations. The problem with this option was that it would leave Afghanistan in chaos, open the door for al-Qaida to resume its operations, and leave the Taliban in control. The second option was to wage war against the Taliban, strengthen the Karzai government and create an Afghan military. The U.S., finding the first option dangerous from a military and political point of view, selected the second.

Afghanistan has been the bane of many empires, including Alexander the Great’s and the Soviets’. The Americans understood that the force they had deployed was insufficient for the task at hand. Defeating the Taliban was an enormous military undertaking. The Taliban were numerous and dispersed, with a command devolving to local units. They understood the terrain and had close connections to the population.

Special operations missions were carried out to try to destroy the leadership. Such attacks may have been operationally brilliant, but they were also strategically irrelevant. An indigenous force like the Taliban, hardened in a civil war, could rapidly regenerate the command structure of what was a light infantry force. These missions may have stunted the Taliban for a time but they couldn’t eliminate the force entirely. Special operations could be only part of the U.S. strategy.

A much larger indigenous force was needed, so the U.S. sought to create an Afghan army. But the most eager recruits to this force would be spies from the Taliban, similar to Vietnam, where the Army of the Republic of Vietnam was filled with Viet Cong volunteers. The Afghan army was at the very least incapable of launching a secure operation on the scale that would be needed to follow up on American gains. And so the war would continue so long as the Americans were prepared to fight.

There was some hope that another major military force, the Pakistanis, would join in the war against the Taliban and support the U.S.-backed government. But this didn’t happen for a host of reasons. Pakistan had a deep interest in Afghanistan and had supported many of the Taliban factions. It was not happy to see the Taliban fall. Second, the Pakistanis were deeply divided, and an assault on the Taliban could lead to civil war in Pakistan. Third, the major faction that supported the Taliban was composed of former generals from Pakistan’s intelligence services who had helped install the regime and who still wielded substantial power. Finally, India had drawn very close to the U.S., but India was Pakistan’s main adversary. Pakistan feared that all this would allow India to establish a presence in Afghanistan. This option, therefore, would have been ineffective.

The current proposals do not seem to bring U.S. forces back to the height of the U.S. presence – and that was woefully insufficient. Continuing special operations missions without sending in follow-on forces simply furthers this problem. And the Afghan army will not be any more reliable than it was in the past.

So what were the planners thinking when they came up with this proposal? It is possible that they intend to persuade Pakistan to engage far more than it has in the past. It has selectively attacked Taliban elements that were politically hostile to Pakistan. But Pakistan has not reconfigured its forces for a general assault, and all the reasons that prevented it from engaging in the past still seem to be in place.

The best explanation is that the planners don’t know how to end this conflict. The tangled confusion that was left by prior administrations is a Gordian knot that still needs to be cut. One option for the U.S. is to leave Afghanistan – this would be the simplest way to cut the knot. It might create sanctuary for terrorists but there is plenty of room for them already in Afghanistan and many other countries.

The political cost in the Muslim world of leaving or halting operations would be extremely high. Iran is nibbling in the west, the war intersects Pakistan-India relations, and the Russians are involved. It is simply a decision that has a higher cost than continued ineffectual warfare. Like Barack Obama, Trump simply doesn’t know how to end this war. It surprises me, but it shouldn’t. All policymakers are trapped in realities they didn’t make.

The Future of Coronavirus: A Modest Proposal