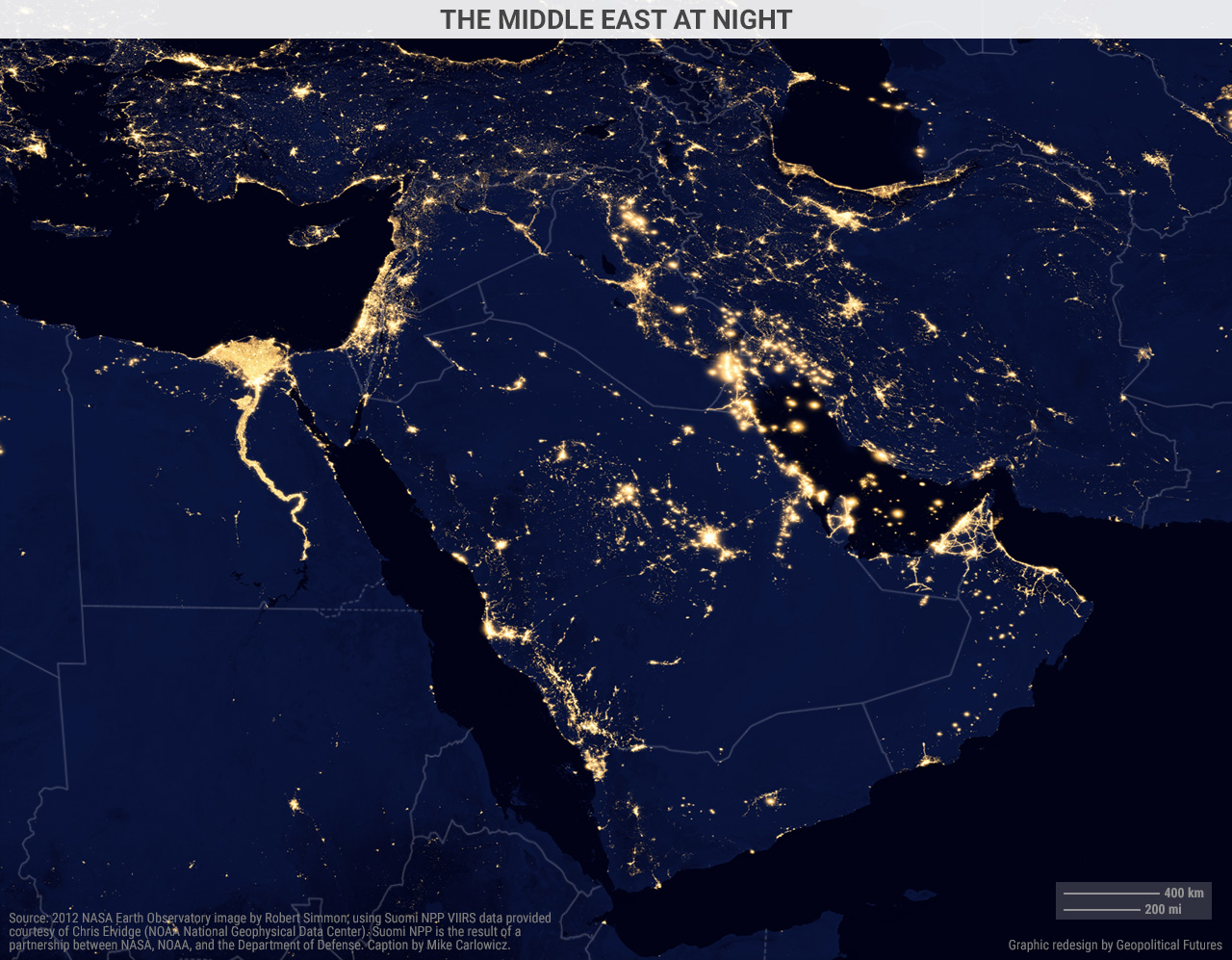 Three other developed population centers are noteworthy. Israel, particularly the thin line along the Mediterranean, is one. In prior decades, Israel was the most heavily electrified region in the Middle East. That is obviously no longer the case. Others have caught up. Lebanon’s coastal region is nearly as well-lit as Israel, along the same axis. It’s interesting to contrast the less intense lighting to the east of the Mediterranean in both countries. The entire Levantine coast, from Gaza to the Syrian border, appears to be a single continuous entity. The borders do not make much of a difference.

Another center of light is the west coast of the Persian Gulf, what we might call the Arab Gulf region. From Kuwait south to Dubai, with a break along the northern coast of the United Arab Emirates, the region is as intensely lit as the Mediterranean coast of Israel and Lebanon. South of Dubai, the lights peter out and fade into the relative darkness of Yemen.

The last population center is in Saudi Arabia. The country is intensely lit in the northeast, the southwest and parts of the interior. The northeastern lights are centered around the oil fields. The lighting in the southwest and interior is consistent with the two historical cores of the country.

First, the western Hejaz region along the Red Sea is where the holy cities of Mecca and Medina are located. The second core area is the interior region of Najd, where the capital Riyadh is located and from where both the ruling Saudi family and religious Wahhabis hail. Najd is in the middle of the desert and the lighting is consistent with the Saudi efforts to develop their heartland. The distance between Mecca and the northeast is striking. Holding together a country so divided by population and development isn’t easy.

As striking as the areas of intense light are the areas with a lack of light. Turkey is a case in point. There is a small area around Istanbul with intense lighting, but it becomes sparse in the rest of the country. In contrast, Iraq, a country that has been torn apart by war, is far more illuminated.

Similarly, in Iran, lights are visible in the western part the country and in the north along the Caspian Sea. This is where most of the population lives. But the lighting is broken up by the Zagros Mountains, which makes continual development impossible. However, the area to the east is interesting for its darkness. It features two deserts and is not conducive to habitation. Persia was born in the mountains of the west and to a great extent continues to face west. By 2012, the lights clung to the western border, and even here, the lighting pattern does not form a continuous solid line.

GEORGE FRIEDMAN: A US attack on North Korea is imminent