German Chancellor Angela Merkel was in Moscow on Saturday to meet with Russian President Vladimir Putin. Over more than three and a half hours they discussed the situations in Syria and Libya, the Iran nuclear deal, the Nord Stream 2 gas pipeline project and implementation of the Minsk agreement regarding Ukraine. This was Merkel’s first visit to Moscow since 2015, an indication that both Russia and Germany needed serious dialogue. In recent months, there have been several signs that Germany is interested in improving ties with Russia. This coincides with an ongoing slowdown of the German economy. Despite existing Western sanctions, Russia remains one of Germany’s key trading partners. Any meeting between Berlin and Moscow may mark the beginning of deeper cooperation. And this possibility always garners attention, because in the past when the two countries have gone through periods of rapprochement, it didn’t last and often ended in conflict or a significant strengthening of the Russian economy. Neither outcome would please the West.

The German economy is teetering on the edge of recession. Germany’s real gross domestic product fell by 0.1 percent in the second quarter of 2019 compared to the previous quarter, and rose by just 0.1 percent in the third quarter. German industrial orders unexpectedly fell in November because of weak external demand and the lack of major contracts. German car manufacturers also significantly reduced their output in 2019. The German Association of the Automotive Industry announced recently that during 2019 only 4.7 million passenger cars were produced in German automobile plants, 9 percent less than a year earlier and the worst output since 1997. Car exports fell by 13 percent, and to reduce costs, Daimler, Volkswagen and Continental have been forced to make workforce cuts. Volkswagen, for example, plans to cut between 5,000 and 7,000 jobs over the next five years. 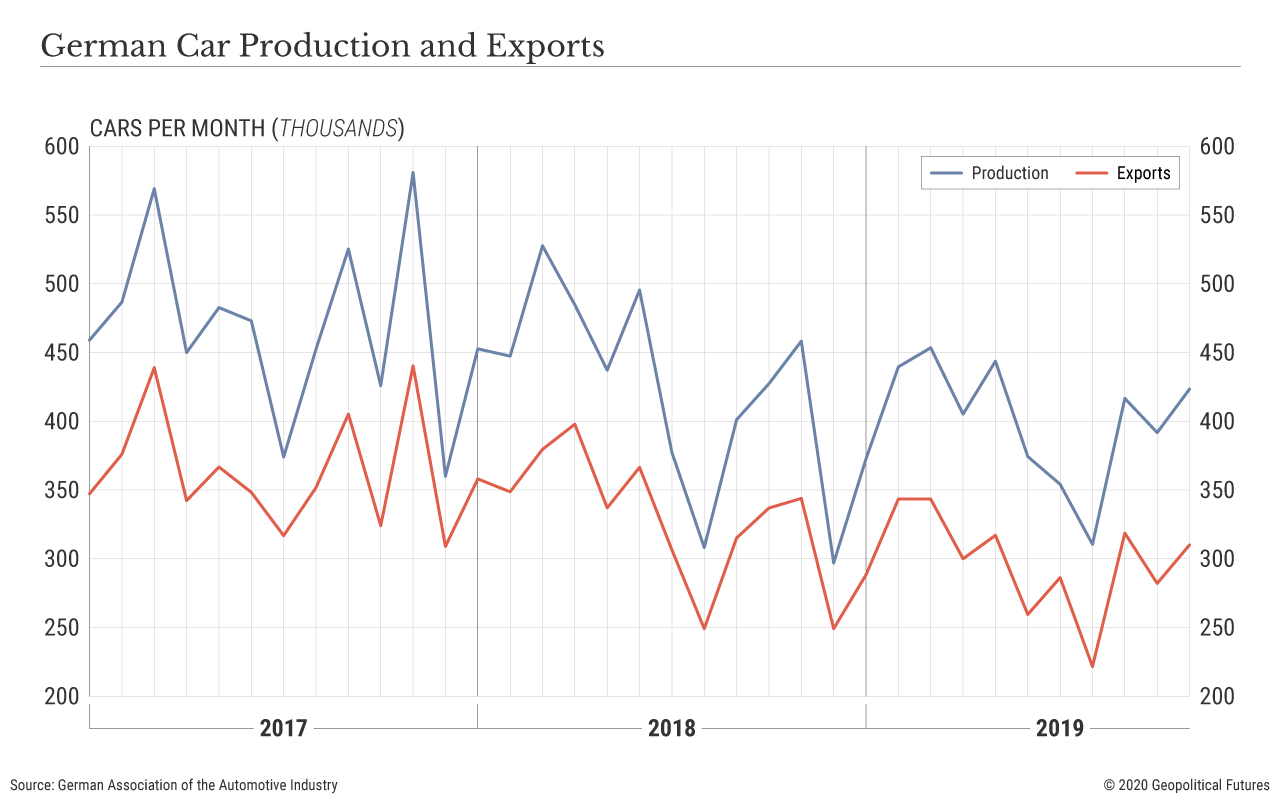 What’s more, Germany, which derives almost 50 percent of its gross domestic product from exports, does not expect demand among its largest trade partners to bounce back anytime soon. A drop in demand from China, one of the main markets for German carmakers, was especially impactful. German automobile sales to the Chinese market fell by 11 percent from January to October 2019. There are political problems, too. Beijing has threatened Germany with retaliatory measures if Berlin bans China’s Huawei from participating in the buildout of the German 5G communication network, while Washington is implementing sanctions against the Nord Stream 2 natural gas pipeline between Russia and Germany. The United States also in October imposed tariffs of 10 percent on large civilian aircraft and 25 percent on some agricultural goods from Europe. Washington is also still holding out the threat of higher tariffs on European cars, which would disproportionately hurt Germany. Finally, it is far from clear what the future holds for the EU-U.K. trade relationship after Brexit. 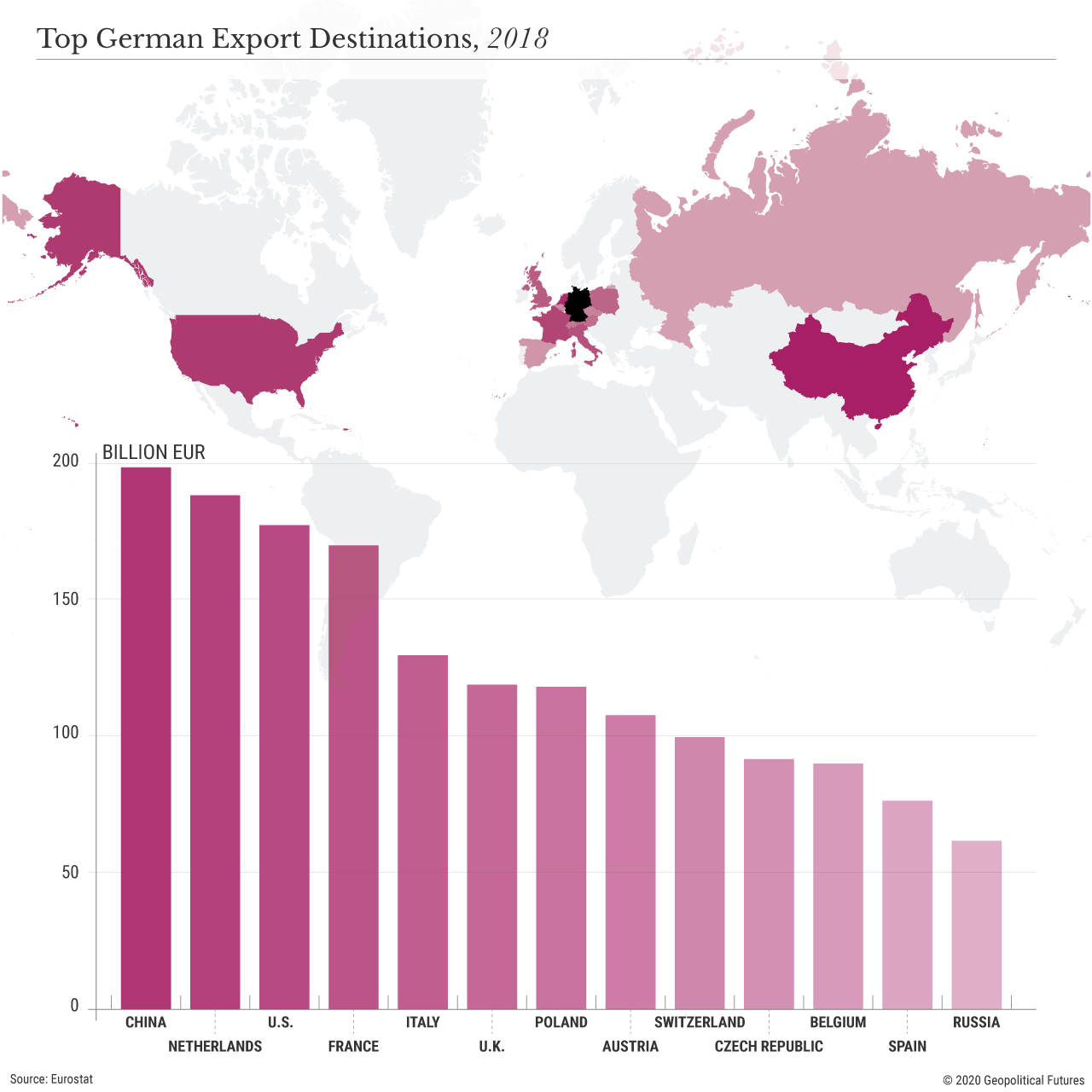 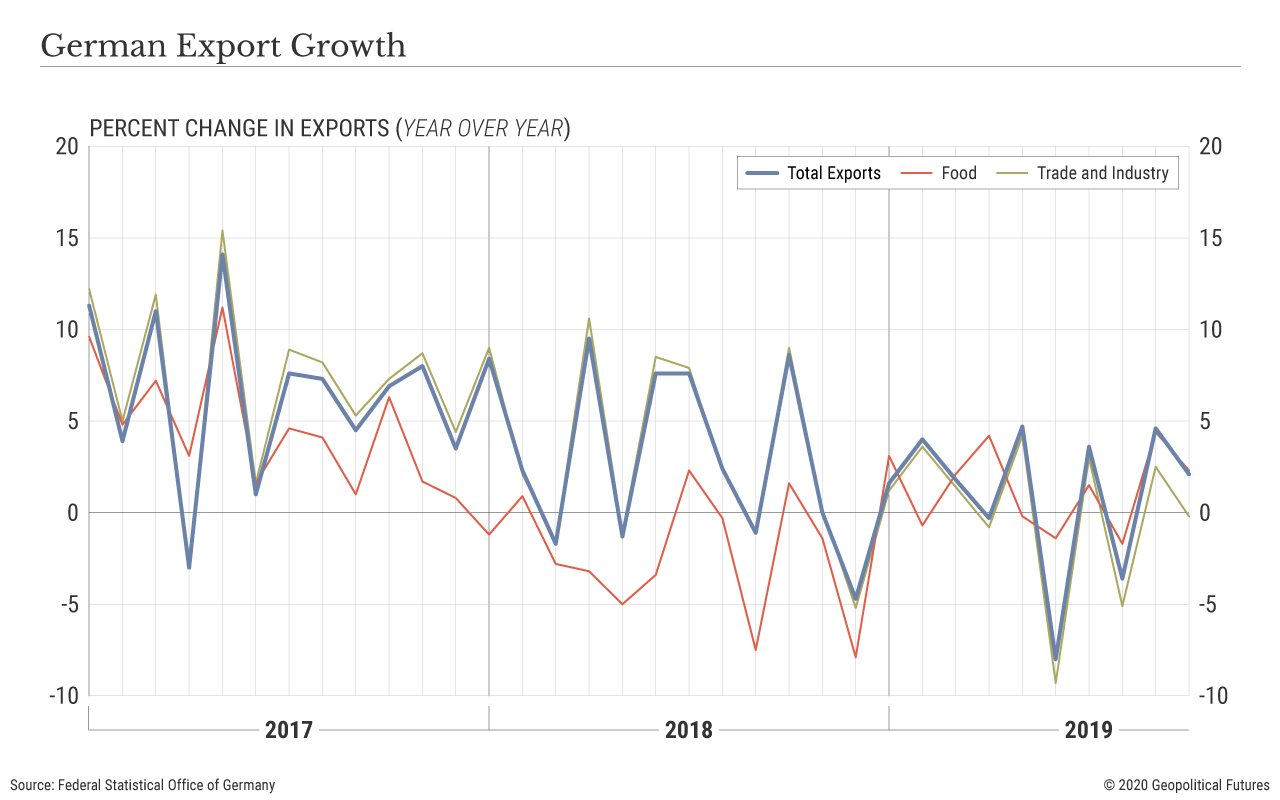 Germany has few other trade partners whose demand could pick up the slack. In theory, Russia could be one of them. In the past, Russia-Germany relations have oscillated dramatically; their swings from confrontation to cooperation have been one of the main axes upon which European history turns. Before World War I, Germany was among Russia’s main trading partners, accounting for a third of Russian exports and almost half of Russian imports, while Germany (along with France, Belgium and the United Kingdom) was one of the main investors in Russia. In the interwar years, with the German military crippled by the tough restrictions of the Treaty of Versailles, Germany turned to the Soviet Union for military-technical exchanges. As part of their military cooperation, the Soviets and Germans set up a joint flight tactical school near Lipetsk and a joint tank school near Kazan, both in Russia. In the early 1970s, Germany again assumed a leading position among the Soviet Union’s main trading partners, partly as a result of a long-term contract on the supply of Soviet pipes and other equipment for the construction of a gas pipeline to Western Europe.

Today, the Russia-Germany economic relationship remains pragmatic, though political relations are far from good since Germany opposes Russia’s position in Crimea and Donbass. The European Union – mostly Germany – accounts for more than half of Russia’s foreign trade, while Germany is among the major direct investors in the Russian economy, an especially appreciated fact in Russia at the moment. The volume of trade between Russia and Germany in 2018 reached $60 billion, higher than at any point since sanctions were enacted over Crimea in 2014. 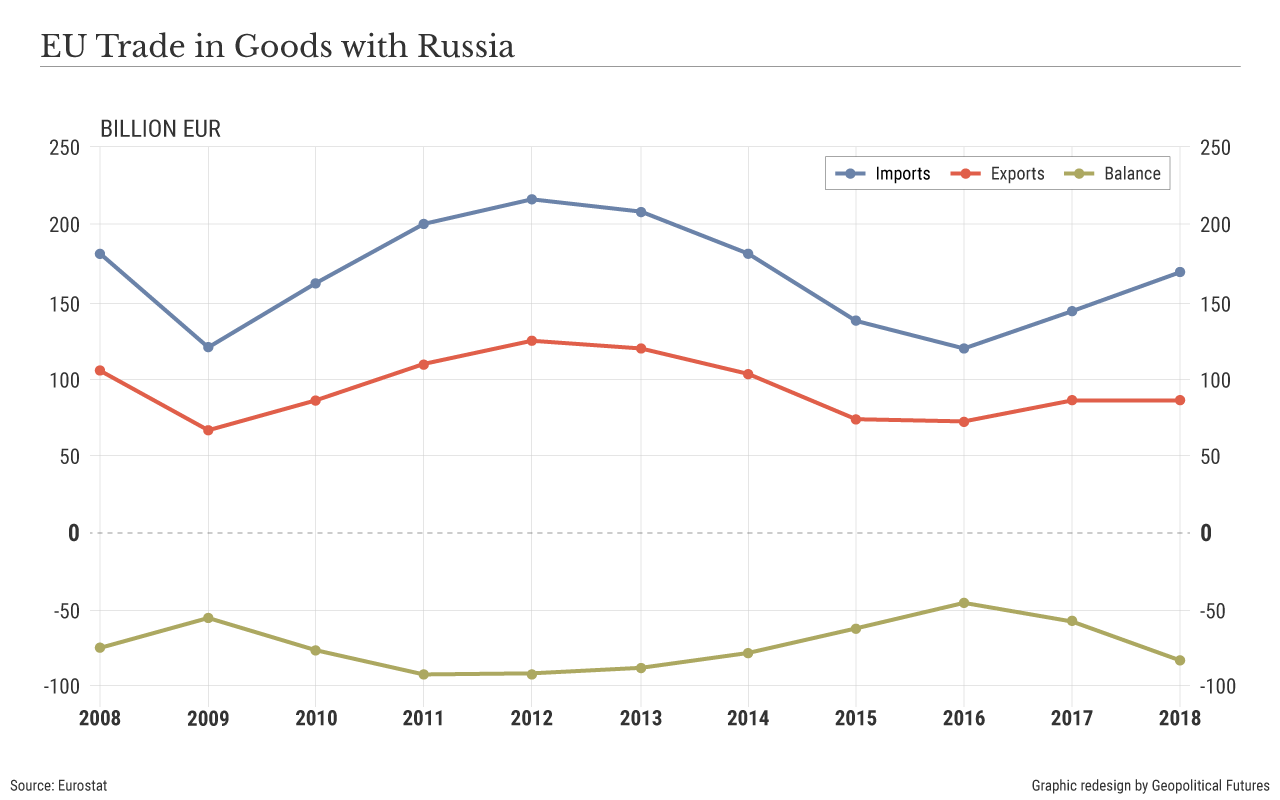 In 2018, German companies’ investment in Russia, at about 3.2 billion euros ($3.6 billion), was near its peak since the collapse of the Soviet Union and a record for the past 10 years. In the first quarter of 2019, the Russian economy received 1.76 billion euros of net direct investment from German firms, which is a third more than at the same point last year. Direct participation by German businesses in Russian companies and Russian debt instruments is not decreasing either.

Volkswagen is one of the largest foreign investors in the Russian automotive industry and owns a plant in the Kaluga region. In 12 years, the Volkswagen Group has invested 1.83 billion euros in Russia, and it is planning to invest another 600 million euros over the next five. Siemens supplies Russia with a wide range of products, such as industrial and medical equipment as well as high-speed electric trains. Small wholesale supermarket Metro Cash & Carry has 89 shops in 50 Russian regions (and one in Crimea); Henkel has nine Russian factories; and Wintershall has already invested 600 million euros of a planned 950 million euros in Nord Stream 2 and established the Achimgaz joint venture with Russia’s Gazprom to develop the Urengoy field in Siberia.

There is some statistical evidence that German companies are continuing to leave the Russian market because of sanctions; according to Deutsche Welle, at the end of 2019, 4,274 companies worked in Russia, compared with 6,300 in 2011. But it’s hard to prove that those German businesses that have left have done so completely or permanently. In addition, the number of companies leaving Russia tells us nothing about those companies’ size, and thus the scale of business leaving. According to the latest survey by the Leibniz Center for European Economic Research, Russia is the most attractive emerging market for German family businesses because of its tax system, the availability of educated workers and its low energy costs.

Despite the harsh criticism of Russia and ongoing sanctions, and their differences on issues including Crimea, Berlin often calls for open dialogue with the Kremlin over several international issues. In the near term, however, the German government finds addressing its economic problems more pressing than other areas. The Russia sanctions have already cost German businesses several billion euros, according to the German-Russian Chamber of Commerce. German businesses do not want to give up their positions in Russia because of new U.S. sanctions. On Nord Stream 2, for example, Germany would like to complete the pipeline so that it can get rid of the extra costs paid to transit countries and thereby purchase cheaper energy, which will give a jolt to its economy.

But greater Russia-Germany cooperation could significantly help Germany’s economic performance only if Russia provides high demand for German goods and sanctions are lifted. Neither is realistic. The Russian economy itself is slowing down and unable to deliver the higher levels of demand that German firms seek. There are reports from Russia daily about declining consumption levels and falling disposable incomes. And sanctions are unlikely to be lifted without a stable peace in Ukraine, and in any case it’s not a decision solely for Berlin to make – a veto from Berlin on extending the EU’s Russia sanctions would cause more political problems in the EU than it would be worth, not to mention the disruption it would cause in the much more important relationship with the United States, the main destination for German exports. This is why the key task for Berlin now is to maintain its position in the Russian market and get a return from its huge investments in the Russian economy. Germany and Russia will certainly continue their economic cooperation, but sanctions will limit their actions. At least in the short term, the German economy won’t find much respite from its eastern neighbor.