For Myanmar, a country where the military brass has called the shots for most of its modern history, this week’s putsch shouldn’t have come as much of a surprise. Military juntas and puppet governments have effectively ruled Myanmar for all but around 20 years since independence in 1948. And when it finally consented to a gradual transition to democracy beginning in 2008, the armed forces made sure they would never have to answer to anyone but themselves. Even after the military-backed party accepted its defeat in landmark 2015 elections with relative grace, it was hard to shake the feeling that the clock was ticking for Aung San Suu Kyi’s new government from the start.

And yet, when military chief Gen. Min Aung Hlaing announced yet another takeover Monday, overturning the Suu Kyi-led National League for Democracy’s second consecutive landslide win in November elections and imposing at least a yearlong state of emergency, it was indeed something of a head-scratcher. That’s partly because the military never actually ceded full power to the civilian government, and it’s hard to see how its core interests could be threatened by a second NLD term. More confounding, the military’s original motivation to relax its grip on power was driven somewhat by shifts still underway in Myanmar’s external environment that were making the country’s near-total isolation from the West untenable. It seemed, in short, that the country had finally found an internal power structure and a strategic rationale needed for a semblance of democracy to flourish. So what’s changed?

Myanmar is home to just about all the elements that engender perpetual instability. It was ruled by the British, and then briefly the Japanese, until 1948. Its mountainous, jungle-covered topography breeds deep ethnic, religious and socio-economic fractures across the country. It also makes extending centralized rule to the whole of the country difficult for any government. Indeed, much of the far-flung upland regions ringing the central core are, if not wholly ungoverned, ruled by the best-armed of the country’s various ethnic groups. Some of these groups have been at war with the central government on and off for nearly a century. It shares borders with far more powerful neighbors – ones suspicious of each other and thus prone to competing for influence in their buffer zones – putting Myanmar in the cross-fire. It has abundant natural resource wealth, but lacking the institutional structures necessary to avoid what’s known as the “resource curse,” these resources mainly fuel conflict, corruption and foreign meddling. 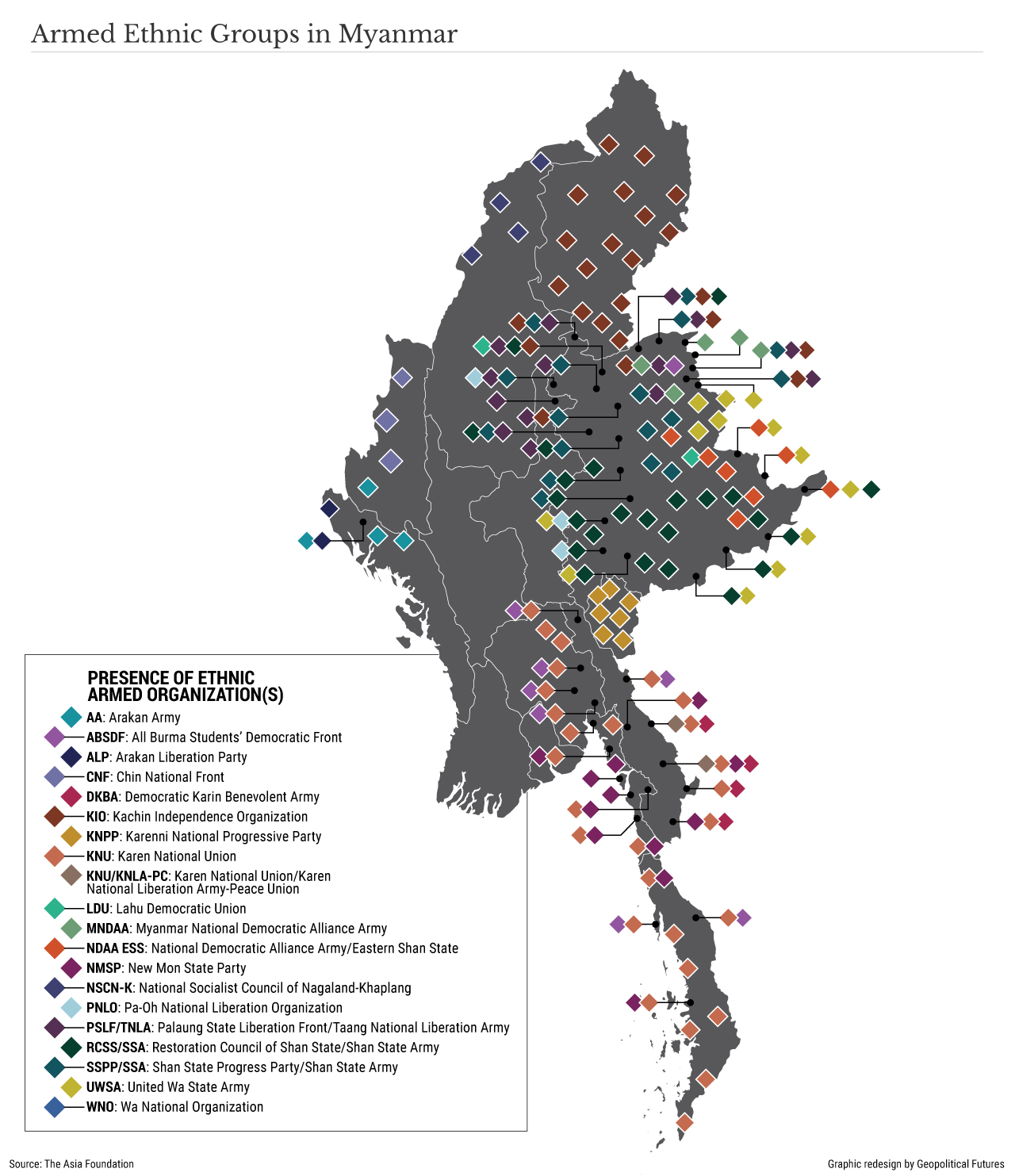 As a result, the country has essentially been at war with itself since independence, and those with the most power have tended to derive it mainly from the barrel of a gun. Controlling the national government, then, has more often than not been either the military or nominally civilian governments backed by the military. This began with the 1962 overthrow of the last elected government on the grounds that the authorities needed to wage its various counterinsurgency campaigns with a free hand. Shortly thereafter, the regime nationalized most of the country’s industries, exiled Indian merchants and placed bans on most forms of foreign aid and trade. And for roughly a half-century since, the military saw international isolation as either unavoidable or in some ways necessary for shielding the country from nefarious external influences and giving itself space to do whatever it deemed necessary to rule as it saw fit. 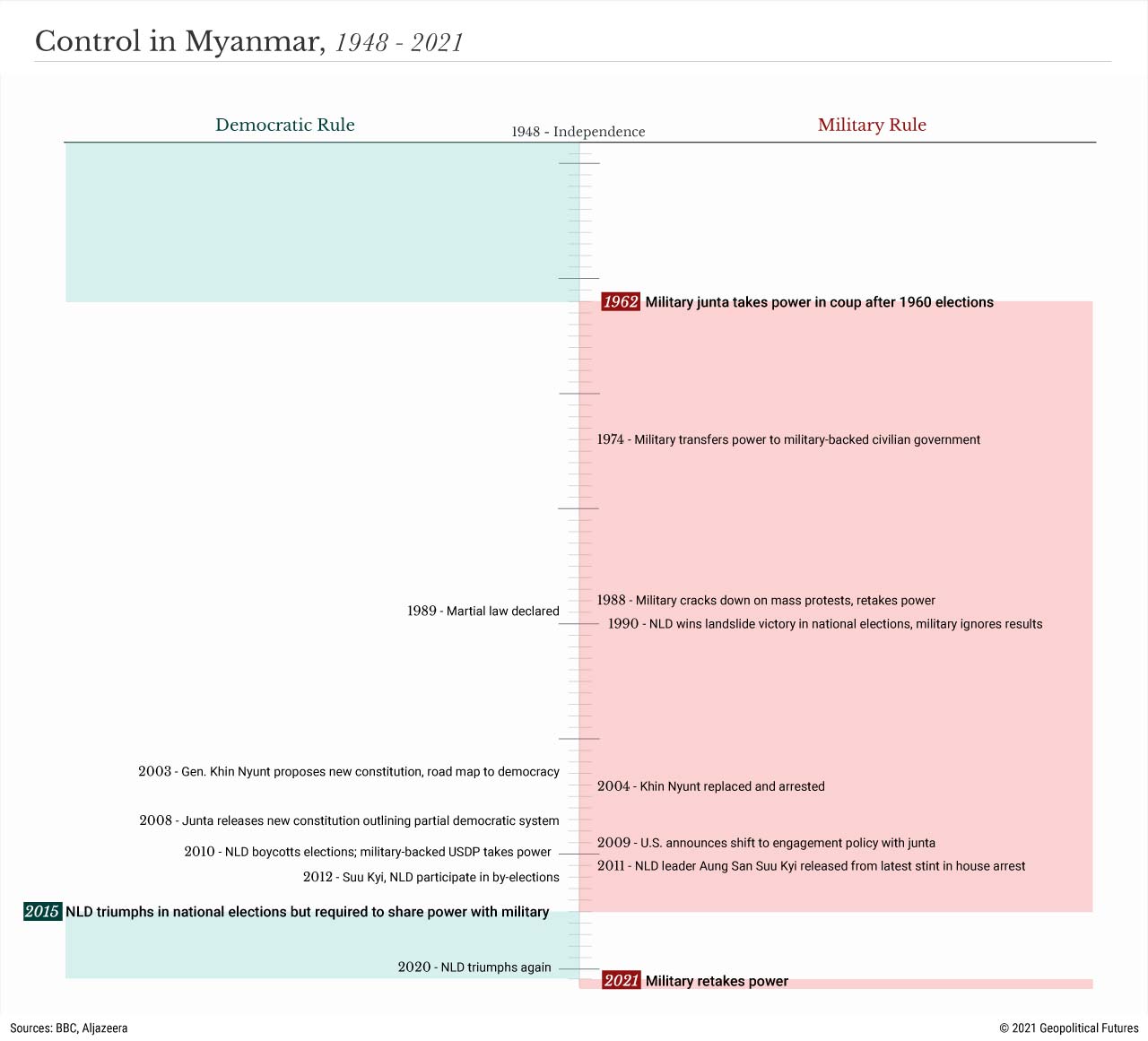 The junta’s fears of foreign threats were reasonable enough. Historically, Myanmar has been liberally used by foreign powers for their own purposes, from British colonizing to Japanese expansion in World War II to the Kuomintang staging an insurgency against Mao. Many of its ethnic militias received backing from foreign powers, including the United States and China, at various times. During the Cold War, the U.S. had a large military footprint in Thailand, Myanmar’s historical adversary. More recently, Western military interventions in Serbia, Iraq and elsewhere have validated the junta’s fear of international interference, particularly in light of the widespread regime change rhetoric directed at the junta. The establishment of the International Criminal Court and other international tribunals, paradoxically, may have made the junta less likely to give up power out of fear that it would end up on trial at The Hague. In short, the regime knew the historical risks of ruling a lucrative corner of the earth with an iron fist.

But by the mid-2000s, the problems of isolation had become apparent. The economy had long since collapsed, making Myanmar one of the world’s poorest countries in its fastest-growing region. Though Chinese support had enriched and entrenched the regime, it had created strategic imbalance and was effectively turning Myanmar into a tributary state. China is a historical adversary for Myanmar, and Beijing’s regular support for powerful, ethnic rebel armies lording over effectively autonomous, poppy-producing regions along the Chinese border only deepened hostility among the Myanmar brass. China, moreover, was growing more and more powerful. As a result, fear of China supplanted fear of the West. The urgency to tap into Myanmar’s latent potential as an energy and natural resource hub connecting China, India and Southeast Asia – and thereby making itself an indispensable ally to all its neighbors – grew. It needed to attract foreign investment to make this possible, and this meant getting the European Union and the U.S. to lift sanctions.

And so by the end of the 2000s, the generals began a gradual process of opening up. Myanmar started transitioning to a nominally civilian government through elections in 2010. These were boycotted by the NLD, and the new government led by President Thein Sein was filled with recently retired generals. But it was a pivotal juncture nonetheless, since Thein Sein spearheaded a successful engagement drive with the West, particularly the U.S. The government freed Aung San Suu Kyi, who had led the opposition largely from house arrest for the previous two decades. By 2012, she was a member of parliament. By 2015, she was leading the NLD to a resounding victory in national elections.

The military didn’t nullify the election results, as it had in the past, partly because it would still wield considerable power in the system it created regardless of their results. The 2008 constitution, for example, reserved 25 percent of seats in parliament for the military (enough to block any attempt to replace the constitution). It also preserved for itself near-full authority over security matters, particularly its endless battles with ethnic rebel armies. Its lucrative business interests were secured in various ways. It also disqualified Suu Kyi from becoming president herself (though, as “state counselor,” she’s still been the de facto head of government).

There’s little evidence that anything about this arrangement was intolerable to the military. And there are huge risks to abandoning it. Thus the strangeness of the decision to pull the plug on it months after Suu Kyi’s party swept to a second victory in November.

To be sure, there were plenty of problems with this system. In effect, Myanmar had two discrete governments operating in parallel, often with conflicting objectives and interests. This made routine tasks of governance complicated, to say nothing of more intractable problems such as negotiating peace and/or waging war against various rebel groups. It also complicated Myanmar’s diplomatic goals, often allowing foreign powers and commercial interests to try to play the two sides off each other. (For example, Beijing had invested heavily in wooing Suu Kyi, who needed a close relationship with the Chinese to give her government some sway over the military.) In a country already as enormously difficult to govern as Myanmar, it’d make at least some sense to move toward a more centralized, unified system with a clear hierarchy of authority. This is the impulse of authoritarian governments across Southeast Asia, after all.

The prevailing wisdom seems to be that Gen. Min Aung Hlaing’s personal ambitions are the core factor behind the move. The general is set to reach retirement age in July. With the military-backed Union Solidarity and Development Party sputtering in the elections, his avenue to stay in power by becoming president was closed. So he found a more direct way to stick around, or so the theory goes. The general and his backers may indeed be motivated primarily by personal ambition; powerful figures usually are. But given the risks involved with the move, it seems unlikely to have happened without broader institutional backing within the military – and a widespread sense that the factors that compelled the military to start dabbling with democracy a decade ago could be managed even if it reversed course.

In other words, the military may believe that the flood of foreign investment that has made Myanmar one of the world’s fastest-growing economies over the past decade won’t abruptly end simply because of a bloodless putsch. Foreign firms typically value stability and security more than democracy, and moving factories is expensive besides. Foreign firms also value an environment where they’re not at risk of running afoul of Western sanctions, of course, but here the military may believe that the West won’t really have the interest to isolate Myanmar as fully as it once did. The U.S. is loath to see such a strategically important country get pulled into China’s orbit once again. Washington routinely overlooks coups in countries that serve its interests. And in any case, the cause of democracy in Myanmar is unlikely to have as much political resonance in the West as it did in the 1990s and 2000s, now that opinion of Suu Kyi, a Nobel Peace Prize winner, has soured over her alleged indifference to the plight of the ethnic Rohingya. Myanmar has every reason to believe important neighbors won’t cause much of a fuss, either. As Thai Prime Minister Prayuth Chan-ocha, who led a coup in 2014, put it Monday: “It’s an internal affair.” That’s the sentiment in most regional capitals.

Even so, a coup is a risky move. Myanmar still needs a ton of investment to modernize its economy and meet the rising demands of its young population, a generation of which has come of age amid unprecedented material abundance. Companies probably won’t flee – even those that have already announced suspensions of local operations – but the uncertainty will presumably make it much harder to attract new ones and sustain the trajectory of the past decade. Shutting down the internet and air traffic doesn’t engender much investor confidence. The military can promise stability, but can it follow through without bloodshed if another social revolution erupts on par with the 2008 Saffron Revolution?

Many in Washington, meanwhile, have indeed come to the conclusion that blanket sanctions are typically counterproductive and strategically risky. But the Biden administration has said that at least some targeted sanctions are coming. A resumption of bilateral military and security cooperation is now probably a nonstarter. China, for its part, has found ways to only deepen its economic influence in Myanmar since the opening, and it still wields considerable leverage over the various peace processes with the ethnic rebel groups. Myanmar’s need for outside help in balancing against Beijing is as strong as ever.

Either way, the military has apparently made its choice: to try to run Myanmar like many of its neighbors are run – illiberal, but more or less accepted by the West anyway, and thus capable of hedging its bets and forging strategic balance with the major powers on its periphery. The only difference with Myanmar is that it was a complete pariah about a decade ago, somehow raising the expectations attached to its improbable emergence.

Myanmar: A New Front in the Indian-Chinese Rivalry