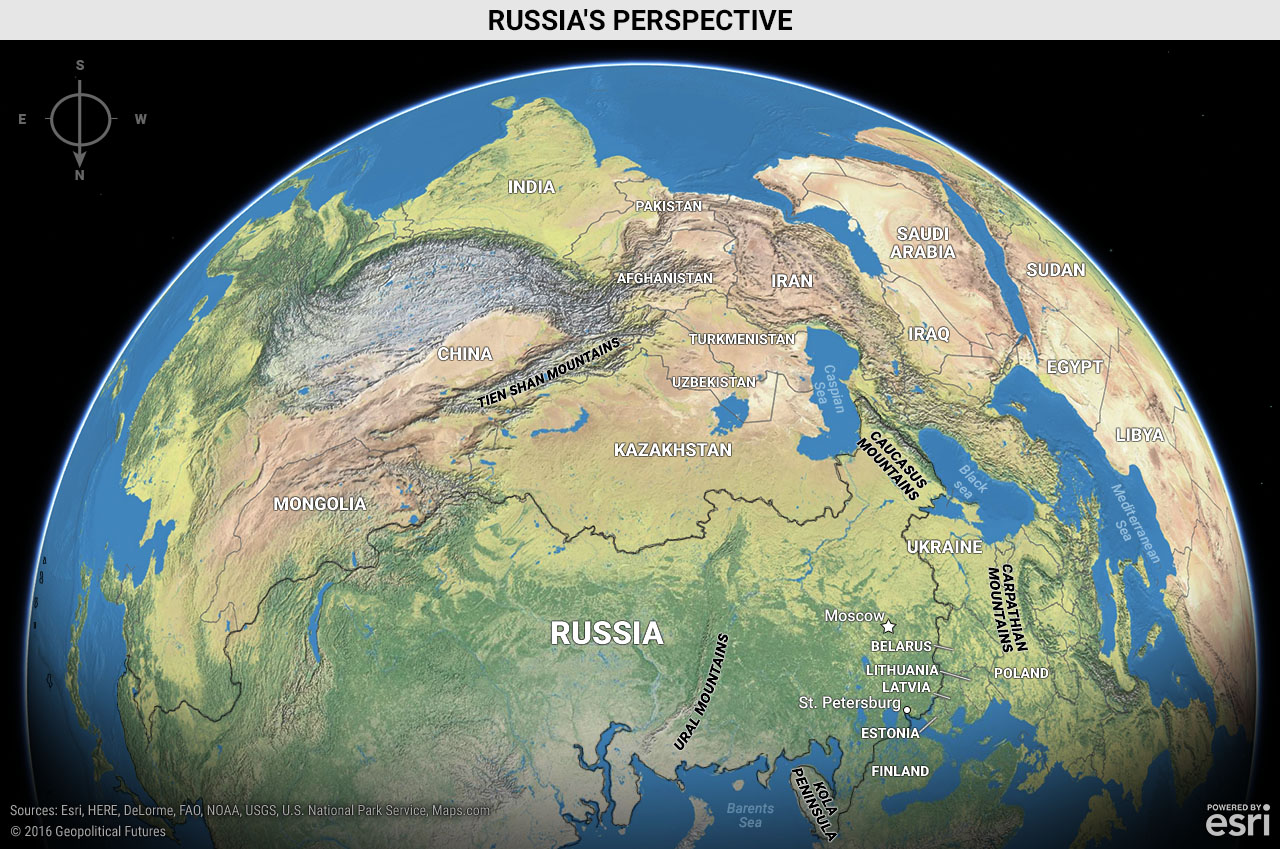 When you look at this map, a few things immediately jump out. Russia is truly a vast country, but its capital, Moscow, is located in the west of the country, as is St. Petersburg. The majority of Russia’s territory may be Asia, but Russia’s core is the area between the Ural Mountains and the border with Europe. Looking south, more natural buffers appear. Kazakhstan is still squarely within Russia’s geographic sphere of influence, but mountain ranges and harsh terrain separate Russia from China, India, and much of South Asia. Meanwhile the Caucasus Mountains serve as the natural buffer between Russia and the Middle East.

The map also reveals two of Russia’s most significant strategic vulnerabilities. The first is that Russia is very much a land-based power. St. Petersburg is an important port, but it is located on the far western border of Russia, and any Russia naval assets have to pass through hostile waters to reach anywhere important. The importance of the Black Sea and the inevitability of conflict with Turkey immediately comes into view. The Black Sea is Russia’s only avenue to access the Mediterranean, and Turkey, the gatekeeper of the Bosporus, sits astride the territory Russia must traverse to exit the Black Sea. To the far east, Russia borders the Pacific Ocean, but that is far away from Russia’s core, and a massive naval force facing the Pacific cannot help Russia with its larger vulnerability: the North European Plain.

The North European Plain is the invasion superhighway of Europe. It begins in France and Germany, extends through Poland and the Baltics, and continues straight to Moscow. There are no significant natural barriers on this flat plain, making it ideally suited for the movement of tanks and massive numbers of soldiers. The one barrier that Russia could use to strengthen itself is to push to the Carpathian Mountains, extending the limits of Russian power, but such a move would still not mitigate threats coming from the plain. The view from Russia makes the acquisition of strategic depth a fundamental imperative for Moscow’s survival. That was the strategy of the Soviet Union, and before its collapse in 1991, Russia dominated the lands between Moscow and the Carpathians and Eastern Europe because of this weakness.

This in turn illustrates why Ukraine is not just of passing interest to Russia. This is a national security issue of fundamental importance. Russia can no more give up Ukraine and allow the presence of hostile forces there than the U.S. could give up Texas or China could give up its buffer regions.

Russia has a long, complex history, rich with war, art, revolution and culture. But the place to look to understand how and why Russia behaves the way it behaves is this map. The first step towards empathetic and objective analysis is to put yourself in the shoes of those who you are trying to understand and see how the world looks from their point of view.

NGOs and the Fallacy of Civil Society