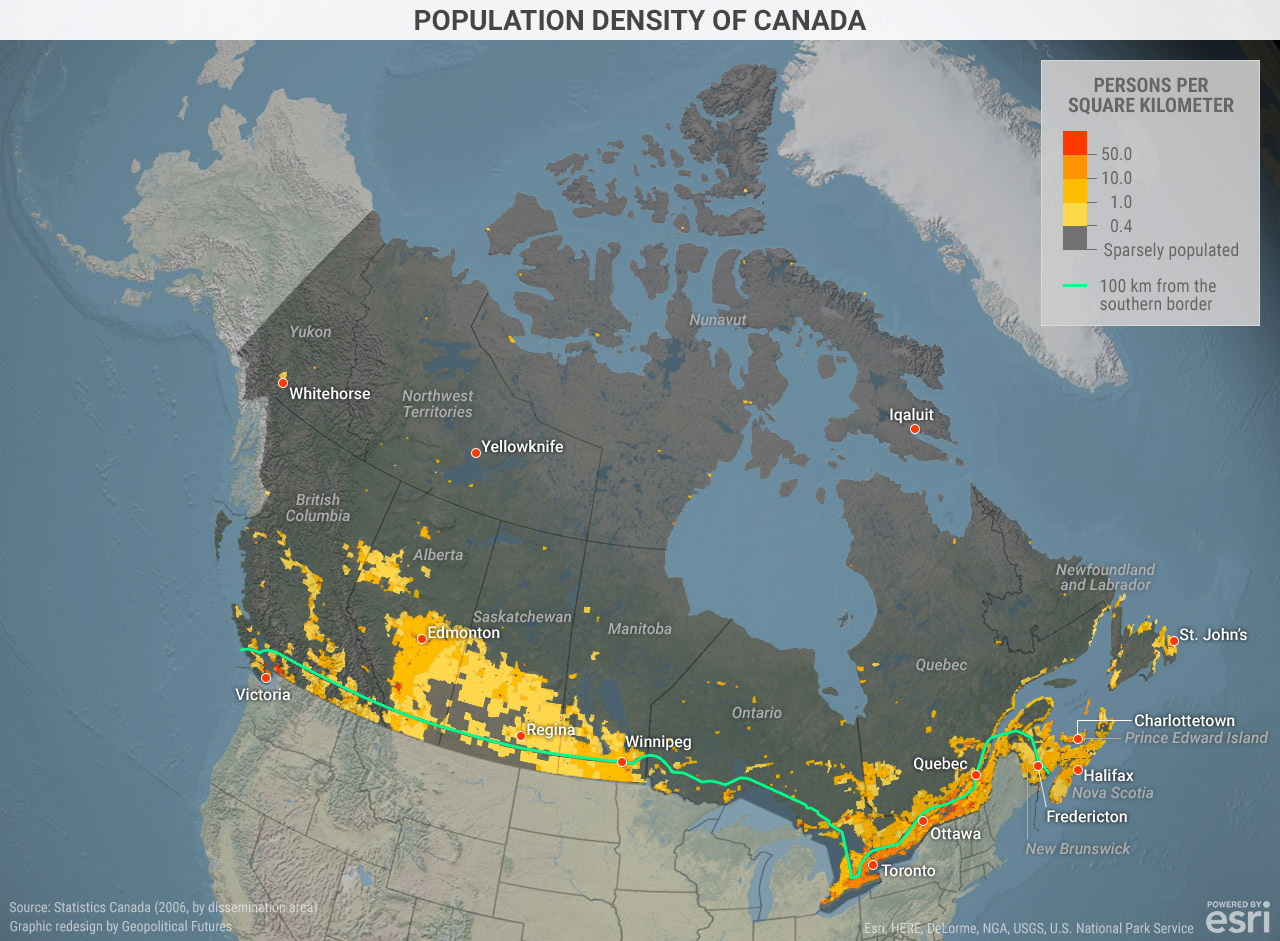 This week’s map helps give a better sense of where people actually live in Canada. While Canada’s borders extend northwards all the way to Greenland, the Arctic and Alaska, the majority of the population lives in a fairly narrow band within 100 miles (160 kilometers) of the U.S. border.

The most densely populated area is along this border in the east, extending from just east of Detroit to the Maritime Provinces on the coast, and containing the major cities of Toronto, Ottawa and Montreal. The second most densely populated region begins in Winnipeg and extends to the base of the Canadian Rockies. In between these two regions, however, Canada is sparsely populated.

The explanation for this pattern is rooted in Canada’s unique geography. Arguably, Canada’s most crucial geographic feature is the Canadian Shield – an area formed mainly of volcanic rock covered with a thin layer of soil. If you were to overlay a map of the Canadian Shield with this week’s population density map, you would see that Canada’s major population centers do not extend into the Shield. Much of Ontario is covered by the Shield, which explains the gap between the two main areas of dense population in the country.

One other critical element of Canada’s geopolitical reality is its relative isolation from the Mississippi River system – the main circulatory system of the United States. Despite the fact that Canada is the U.S.’s second largest trading partner, Canada has to rely on land-based transport methods when shipping goods to the United States. The area of Canada that is most densely populated is also not coincidentally located near Canada’s main maritime shipping lane, which covers the Great Lakes and the St. Lawrence River leading into the Atlantic Ocean.

This map then tells us a great deal about how Canada behaves in the world. Canada must have a close relationship with the United States because not only are the two neighbors, but the vast majority of Canada’s population lives very close to the U.S. border. Canada may appear to be a country of immense size on a map, but this is something of an illusion, because harsh weather and the Canadian Shield make the development of large population centers in much of the Canadian interior and north difficult, though not impossible.

Canada’s size cannot and should not be ignored, but size by itself tells us relatively little about the country. This map helps us see that Canada is actually a long, thin country whose relationship with the United States is of defining importance.

Is the US Preparing to Attack North Korea?