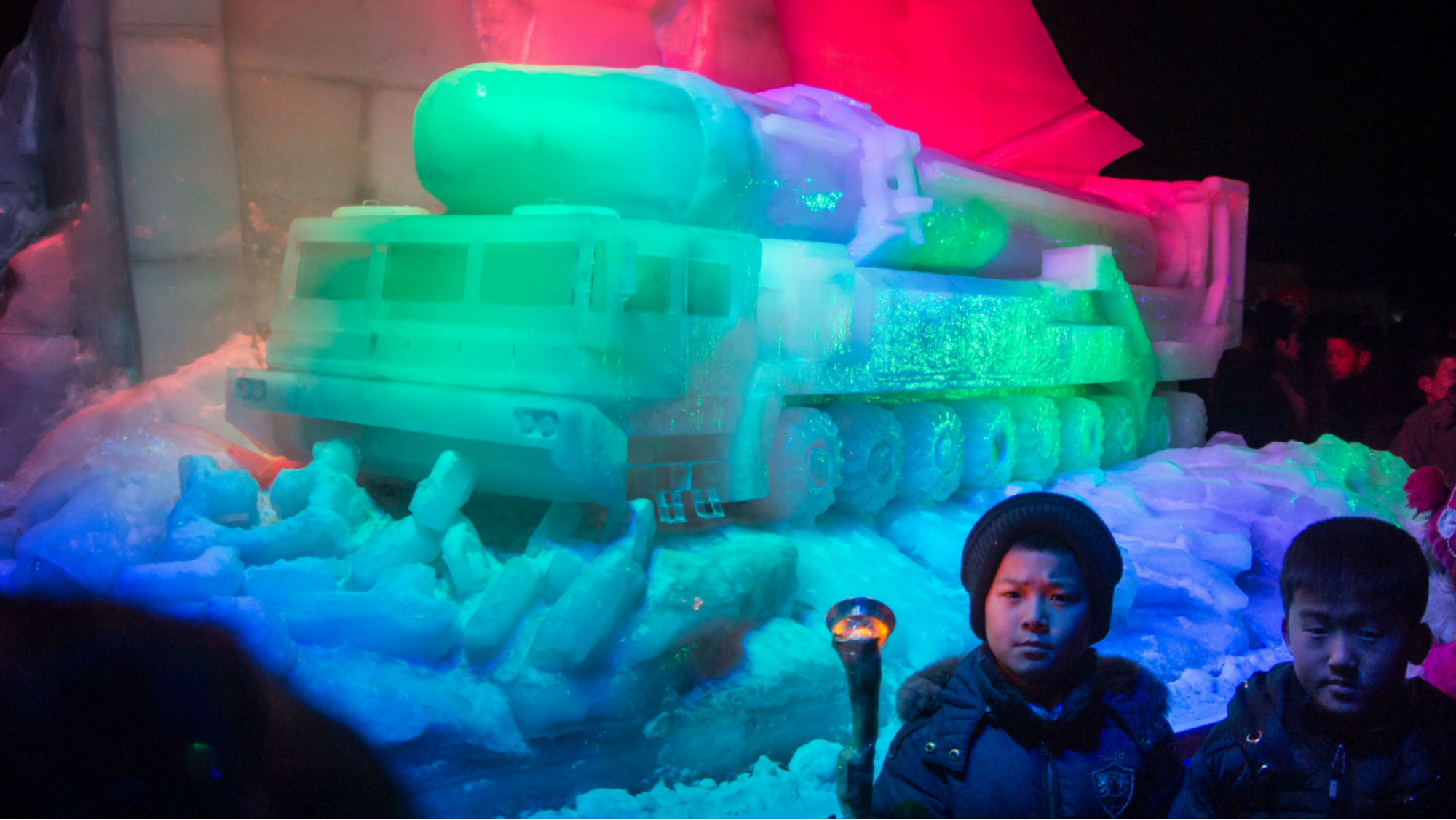 In his New Year’s Day address, North Korean leader Kim Jong Un called for direct talks with South Korea and expressed interest in North Korea’s participation in February’s Winter Olympics in Pyeongchang. The following day, South Korean President Moon Jae-in called for urgent measures to ensure the North’s participation in the games, and Seoul’s unification minister proposed that the two sides meet at the Demilitarized Zone for direct talks over the matter on Jan. 9.

Fresh off its longest-range ICBM test to date in late November — a missile theoretically capable of landing a nuke in the lap of Lady Liberty in New York Harbor — North Korea is trying to portray itself as a country negotiating from a position of newfound strength. In combination with the apparent olive branch to Seoul, Kim insisted that the North has completed its nuclear deterrent and ordered mass production of the new missiles, but also said nukes would be used only to repel invasion. In effect, the North is probing for opportunities to gain relief from international sanctions, gain recognition as a responsible and confirmed nuclear power, and potentially drive a deeper wedge in the U.S.-South Korean alliance. However, the underlying fundamentals of the crisis on the Korean Peninsula have not changed. Pyongyang can neither make substantive concessions nor cash in on the success of its nuclear weapons program to reshape the regional security landscape to its liking.

Despite the leap in nuclear and ballistic missile development made by the North over the past few years, Pyongyang is still, in most ways, acting out of vulnerability. This is primarily because it still cannot conduct a nuclear strike on the mainland United States with any high degree of certainty. It is true that the North has now demonstrated the ability to fly a ballistic missile the 13,000+ kilometers (about 8,100 miles) it must travel to strike the U.S. east coast. But it has yet to publicly demonstrate a mastery of the technology to keep the missile intact and on target as it re-enters the Earth’s atmosphere — by far the most difficult part of ballistic missile development. Without it, the North doesn’t have a deliverable nuclear warhead capable of threatening the U.S.

In short, the North still does not appear to have the capabilities to force the U.S. to negotiate with it as nuclear equals. Despite periodic back-channel talks between U.S. and North Korean officials over the past year — and despite Secretary of State Rex Tillerson’s statement in mid-December that the U.S. would be open to direct talks without preconditions, which the White House walked back shortly thereafter — the U.S. has shown no indication that it’s willing to ease off its demands for complete denuclearization.

The problem for the North is this means it remains firmly within the most dangerous window of its nuclear development: where it has demonstrated a high probability that it will achieve a full nuclear deterrent but hasn’t yet done so. The likelihood of a U.S. military operation to address the North’s nuclear program is highest in this window. This doesn’t mean the North’s conventional deterrent is any less powerful. The artillery the North has amassed within easy striking distance of Seoul (not to mention uncertainty surrounding the North’s arsenal of biological and chemical weapons) may very well be enough to keep the U.S. from attacking. And the North may very well think it has the U.S. backed into a corner. But the possibility of war remains high enough that the North has little choice but to play every card it has to try to forestall the Americans.

Moreover, the North has come under unprecedented sanctions pressure. Sanctions alone will not be enough to force the North to capitulate. The North’s sophisticated capabilities for cheating sanctions, along with its ongoing lifelines to China and Russia, continue to give the North some breathing room. But by all accounts, the international sanctions effort has inflicted no small amount of pain on the North. Notably, Kim’s New Year’s address focused heavily on the sanctions; he even admitted that the North needed to improve its “ability to be self-reliant,” hinting that the pressure may be getting to Pyongyang. This heightens the potential for resistance to the regime’s policy from within elite circles in Pyongyang or the possibility that discontent among the military’s rank and file will lead to a substantive erosion in readiness.

Pyongyang may see an opening to use Seoul to potentially gain some sanctions relief and keep the Americans at bay. South Korea still very much fears that the U.S. will decide it is necessary to undertake unilateral military action that puts tens of thousands of lives in the capital at risk. Given its desire to avoid a military confrontation in which it would suffer far more immediate casualties than its allies, the administration in Seoul is keen to replicate the “Sunshine” engagement policies of South Korean administrations of the late 1990s to mid-2000s. By opening direct talks with Seoul and attending the Olympics, Pyongyang thinks it may be able to strengthen the doves in South Korea and potentially widen the distance between Seoul and Washington — or, if the U.S. supports Seoul’s engagement strategy, then the distance between Washington and Tokyo, which would like the U.S. to decisively end the North Korean threat.

At minimum, it will put a more positive spotlight on the North internationally and undermine efforts to isolate Pyongyang as an illegitimate pariah, potentially weakening interest in expanding or even enforcing the sanctions. If Pyongyang can succeed in gaining even minor concessions — whether in the form of sanctions relief or a brief freeze in U.S.-ROK drills as proposed by Moon Jae-in — then it can demonstrate to skeptics within the regime that its strategy is paying off and will herald even greater benefits once its nuclear deterrent is complete. If none of this comes to pass, then it will have come at the cost only of sending a pair of figure skaters to Pyeongchang.

Regardless, this apparent opening doesn’t herald a major strategic shift from the North or change the trajectory of the crisis on the Korean Peninsula. There are two primary reasons for this: First, for the foreseeable future, Pyongyang can do little to weaken the U.S.-South Korean alliance. The main thing that could shatter the U.S. security guarantees to South Korea is if the U.S. decides that sacrificing Seoul is an acceptable price to pay for mitigating the North’s nuclear threat to the U.S. homeland. Even if such a scenario were likely to lead to an irrevocable long-term loss of trust and strategic rationale for the alliance, the South would have little choice but to cooperate with the U.S. in an effort to minimize the damage as much as possible during operations.

We think this scenario is unlikely. But Seoul’s strategy in lieu of war still relies heavily on the power only the U.S. can bring to bear. In the short term, Seoul gains negotiating leverage the more a unilateral U.S. attack appears imminent (even if it undermines this somewhat by repeatedly insisting that it will not allow a U.S. pre-emptive attack). Over the long-term, Seoul is betting big on deterrence, for example by investing heavily in anti-missile and anti-artillery capabilities. But the South does not yet have the conventional military capabilities, much less a nuclear arsenal to fully deter the North without U.S. support. Its biggest long-term security challenges come not from the north, but to the east and west, from China and Japan, respectively. Thus, whether or not the U.S. chooses the military option in regard to North Korea, Seoul still needs the Americans. This means the South Koreans and the Americans need to continue conducting the sorts of joint military drills Pyongyang so loathes.

The second reason is similar: North Korea cannot yet suspend its missile and nuclear tests indefinitely without giving up on a fully formed deterrent and thus remaining uncomfortably within the window where the probability of a U.S. attack is highest. It is no longer pursuing the strategies of the 1990s and 2000s, when it was willing to delay its nuclear progress by a few years in exchange for sanctions relief and economic support. This time around, it’s too close to realizing its nuclear dream. And with an inevitable resumption of testing will come a resumption of sanctions pressure, U.S.-ROK drills and doubts about the viability of Seoul’s “Sunshine” policies, and thus a return to the status quo.

The major shift in the crisis on the Korean Peninsula will come only when Pyongyang convinces the U.S. that the costs of attacking the North are steeper than those of living with a nuclear North — or vice versa. Until then, we’re in a phase of North Korean posturing to its audience in Pyongyang while probing for small advantages abroad.

The Philippines Makes the Most of China’s Interest