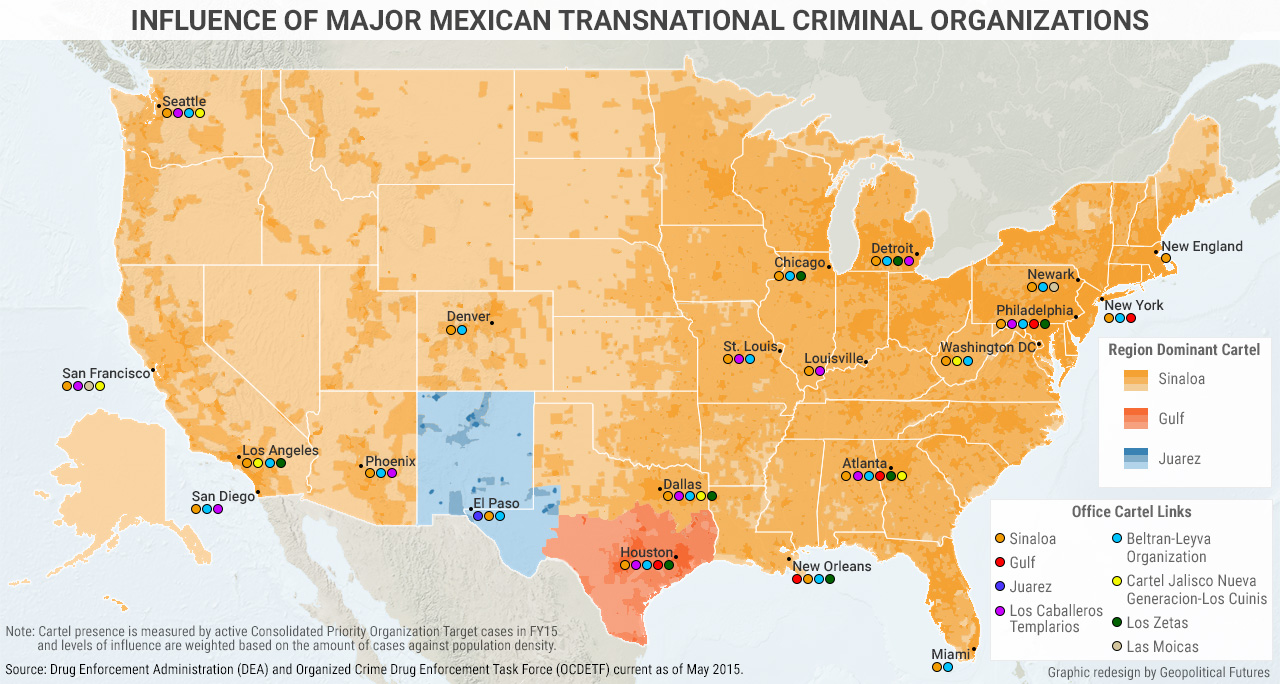 Drug trafficking organizations are often blamed for the rise in violence in Mexico. Official statistics do not differentiate between drug- or organized crime-related killings and other homicides, but some types of homicides are characteristic of the criminal and drug trafficking organizations, or DTOs, in Mexico. Homicides involving guns – which accounted for about two-thirds of the homicides in 2017 – have a high probability of being related to organized crime or drug traffickers. Extortion and kidnapping, along with human trafficking and sales of stolen cars, are also associated with DTOs.

The main reasons for the spike in violence are the splintering, restructuring and growing competition among the DTOs and other organized crime groups in Mexico. The current criminal organization landscape is exceptionally fluid. Many groups operate more on a local cell-based level, and their association with other groups may shift with business interests. Many of these groups not only are involved in drug trafficking but also engage in other profitable crimes, including kidnapping, assassination, auto theft, prostitution, extortion, money laundering, software piracy, resource theft and human trafficking. Some criminal organizations have incorporated areas of specialization. For instance, some DTOs on the U.S. border have assumed the role of toll collectors, exacting payment from other traffickers, while other organizations specialize in sourcing cocaine from South America. The number of large DTOs jumped from four in 2006 to nine in 2017, and another 45 smaller organized crime groups have been identified.

In terms of foreign policy, the violence in Mexico will primarily affect its relationship with the United States. Besides the shared border, the U.S. is the main destination for Mexican-produced opium and cocaine transited through Mexico, and is the source of illegal weapons for Mexico’s DTOs.

The Mexican DTOs are the major wholesalers of illegal drugs in the United States and are increasingly gaining control of U.S. retail-level distribution through alliances with U.S. gangs. Street gangs continue to work with Mexican DTOs in Mexico, along the southwest border, and throughout the United States. These relationships are based more on location and personal and business ties than on strict affiliations with a given gang.

Mexican DTOs conduct business with a much lower profile in the U.S. than they do in Mexico to avoid engaging with security officials. The Drug Enforcement Administration’s 2017 National Drug Assessment notes there has been limited spillover violence in the United States. Violence that does occur is infrequent, limited to the southwest border and mostly among traffickers. Mexican DTO activity in the United States is mainly overseen by Mexican nationals or U.S. citizens of Mexican origin. Those operating in the United States often share familial ties with, or can be traced back to, the natal region of leading cartel figures in Mexico.

The rise in violence in Mexico is geopolitically significant because of its potential to affect the trajectory of Mexico’s economic development and basic framework of its relationship with the United States. Given the political and resource constraints facing the Mexican government, this level of violence will likely continue to rise in 2018. The United States will be closely watching for any increase in spillover violence.