Editor’s note: George is preparing for a book tour for his new book “The Storm Before the Calm,” which launches in a few days. He was unable to write a new Thought piece this week, so we hope you’ll bear with him and enjoy re-reading this piece we chose from June 2017.

Last week there was a fire in a high-rise building in London that killed dozens. British Prime Minister Theresa May was slow to issue a statement, and it was another day before she visited the scene – and then only to meet with members of the emergency services. It was not until day three that she paid a visit to the survivors. Her explanation was that she was busy overseeing the management of the disaster and therefore couldn’t go sooner. She was met by a storm of criticism.

Two questions arise from this affair. First, why would anyone think an empty gesture like visiting the site of a fire – no matter how many died – to be important? Perhaps the prime minister ought to be doing something productive? Second, why did May answer that she was busy overseeing the crisis? Exactly what was it about the disaster that she could oversee? She faced what seemed to be unreasonable condemnation and replied with a preposterous justification.

But it is the first question that I want to discuss because it raises another, more important question: that of leadership.

The simple answer to the first question is that May ought to have visited the site of the fire because that’s what prime ministers do. They engage in gestures, and whatever they may privately feel or not feel, they show themselves to be grieving the dead. A prime minister, a president, a king or a queen represents the country at moments such as these, and their responsibility is to convey to the country the gravity of the event, the sorrow they feel, and that the state – personified by them – is not indifferent to the suffering of its citizens. 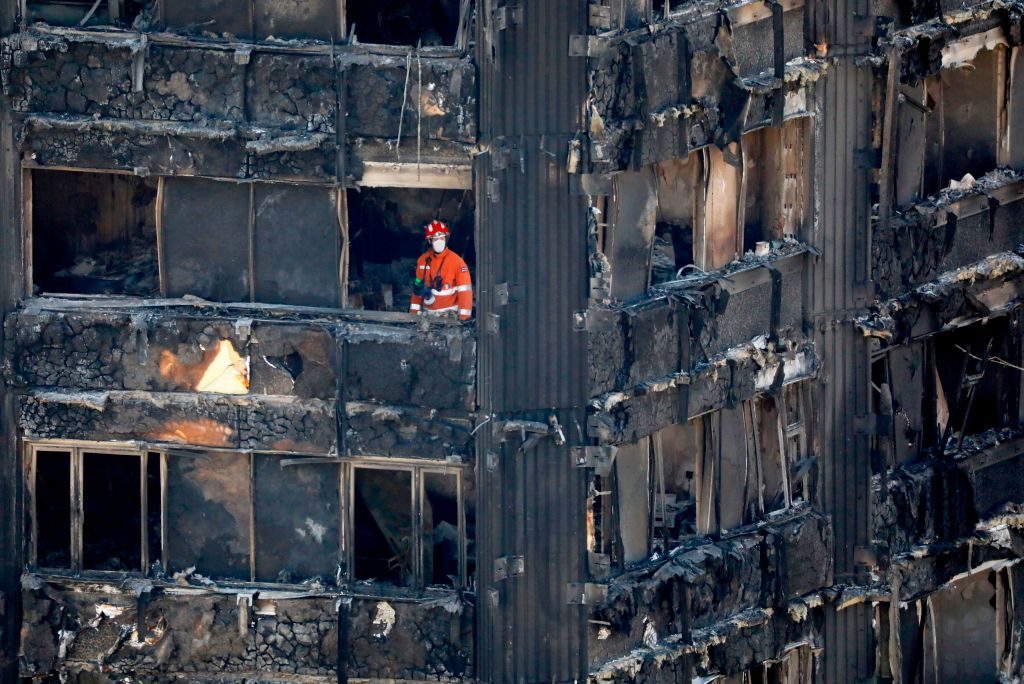 Members of the emergency services work inside the charred remains of the Grenfell Tower block in Kensington, west London, on June 17, 2017, follwing the June 14 fire at the residential building. TOLGA AKMEN/AFP/Getty Images

Even if the grief is posed, there is value in it. The philosopher La Rochefoucauld wrote that hypocrisy is the tribute that vice pays to virtue. Many of us are incapable of feeling the emotion we ought to feel. The reason is that, in some way, we are corrupt. But in pretending to feel it, we are validating virtue.

A leader must represent the best of us. May is not the head bureaucrat; she is a political leader, and the exercise of leadership is meant to display the virtues the nation ought to have. This is so important that the U.K. has two such leaders – the prime minister and the queen – both of whom are required to show what is appropriate and what the state feels, even if they don’t themselves feel it. A political leader must first lead, and in leading, gain the authority to make policy. A leader who wants to make policy and is indifferent to the task of leadership will fail. Policy is easy; leadership is hard.

The statue of Abraham Lincoln in Washington superbly grasps who we wanted Lincoln to be: a brooding, grieving figure who felt every death, on both sides, during the Civil War. Whether he actually felt that I don’t know. But he convinced the nation that he did. Otherwise, his statue would not have been built or honored. Lincoln understood that the country had to be healed, or the union, saved in battle, would be lost in peace. To heal it, he had to project to the country that the war was not only a tragedy but also a necessity. He also knew that there had to be a reconciliation. And for this reconciliation, the Confederacy could not be absolved, but those who fought for it had to be. Its soldiers had to be treated with honor – not for their beliefs, but because they believed deeply enough to die.

This is the purpose of leadership. A leader understands what is necessary. He also understands that governing, properly done, is a work of art. A leader paints a picture of who he is by what he says, by the gestures he makes and by framing an abiding concern for the nation. It is a concern that ought to be natural but in the greatest of politicians is crafted, sometimes in opposition to their nature. In our age, this would be the crime of inauthenticity. La Rochefoucauld would celebrate it since it is far harder to appear to be caring when you are not than it is to feel the things you ought to. But a leader who knows what is right and needed in spite of his nature does something much harder: He does what he should and not what he is inclined to do. And he does it in such a way that we can believe in his virtue, and through him, in our own.

A nation that does not feel itself as virtuous is wounded in its soul. When there is no leader who even goes to the trouble of appearing to understand what the virtue of a leader is, then the country itself loses its sense of virtue. When a leader cannot imagine leadership beyond expertise in policymaking, and sees the role of leadership as a trivial task, then we are in equal trouble.

The Art of Leadership

In focusing on the question of leadership, I am challenging one of the foundations of geopolitics. Geopolitics, as we interpret it, argues that nations are too vast to be ruled by any one person, particularly since no leader rules for very long compared to the life of a nation. For us, the course of nations can be best understood by ignoring presidents and prime ministers, and all the lesser figures, and focusing on the impersonal forces that shape millions of people and cause the nation to act in certain and predictable ways.

If this is true, then Lincoln’s leadership would be a matter of indifference. The North, having defeated the South, would inevitably have unified the nation. In fact, with Lincoln dead, the victors imposed Reconstruction, a relatively harsh regime that told the South that it had lost and would pay the price. Despite the absence of Lincoln’s sensibility after the war, the union survived. From this, it could be said that Lincoln was irrelevant.

But that assumes that geopolitics, as important as it is for my understanding of the world, would be all there is to public life; there is what will be and what can’t be, and that determines the rise and fall of nations. This is what geopolitics is about, and it matters. But nations also have an aesthetic sense of themselves. We live in a work of art crafted by the founders and leaders of the nation. It defines our sense of self, and without that sense, we rise and fall in a very squalid place. Lincoln crafted a picture of who Americans are, and it is not unfair to say it has been lost – by all factions of our polity. Nothing worth having has replaced it. America is a great power, but one with a troubled and hungry soul.

I began this with a trivial moment, in Britain, where a prime minister did not present herself at a fire and show the nation that it is proper to grieve. She answered that she had no time to go because she was busy managing things. She did not know that management is not the task of the prime minister – at least not until after she leads. And if she leads, management becomes easier. Her predecessor, Winston Churchill, knew this.

Churchills come rarely into the world, and truth be known, he was a fairly poor manager. But he gave Britain the sense that the world was filled with evil, and that that evil had to be destroyed. He also gave Britain the sense that it was not only worthy of the task, but that it should feel itself honored to be placed in the role. Britain might have been victorious without Churchill. But Churchill not only made it far easier to win, but he gave the victory a meaning of transcendent importance. He made Britain into a work of art and lifted it among the prosaic and squalid business of just surviving. He did not change history, but he imbued it with virtues that even the most wicked of people would have honored by their hypocrisy.

What Has Happened to Us