On Nov. 8, Indian Prime Minister Narendra Modi announced he would take 85 percent of India’s money out of circulation. The result was chaotic, as anyone could have anticipated. The media’s take that the situation is an example of Indian incompetence is simply implausible. Indian officials knew what would happen. Therefore, the question is why they did it.

The stated purpose of this action was to crack down on corruption and terrorism by ending funding supplied by “black money.” Officials intended to do this by removing all 500- and 1,000-rupee notes from circulation (1,000 rupees is about $15). People holding these notes would be required to deposit or possibly exchange them in order to keep their money and not have it go to waste. The decommissioned notes, which account for 20 percent of India’s GDP according to conservative estimates, have been used to store illegal wealth. 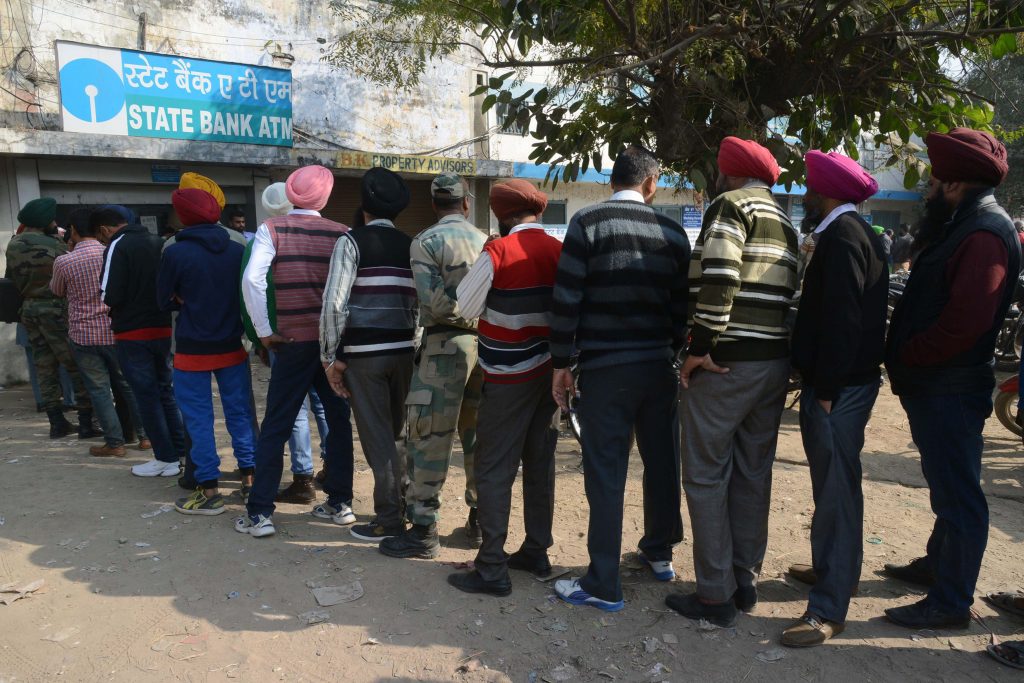 Bank customers in India line up to withdraw money from an ATM in Amritsar, on Nov. 17, 2016. NARINDER NANU/AFP/Getty Images

The measure has caused chaos due to cash shortages, including social unrest, queues at banks and stunted local business transactions. Small-denomination bills simply are insufficient to serve the country, and people unwilling to risk turning in vast amounts of high-denomination rupees have wiped out a substantial amount of the total value of liquid currency. Adding to the chaos, the government announced the action just a few hours before the measure took effect. Given that the affected currency accounts for 80 to 90 percent of all transactions in India, government officials knew they had set in motion temporary paralysis.

The Indian government essentially declared that 500- and 1,000-rupee notes would no longer be recognized as valid currency for financial transactions. Rather, those notes would be recognized only as valid coupons for deposit or new cash exchanges at specific locations approved by the government. Those deposits and exchanges will be accepted through Dec. 30. In order to carry out these transactions, individuals must present a government-approved ID, which not everyone in the country has.

Small deposits and exchanges will be carried out automatically. But deposits of more than 250,000 rupees will alert tax officials. People with that amount or more will be asked to prove they have paid taxes on the income. If not, they will be charged the full tax amount plus a 200 percent fine on taxes owed. In other words, the process of demonetization will help bring individuals into the tax collection system.

The move obviously was intended to make the informal economy formal. Most Indians operate outside the economy’s formal sector. Only about 1 percent of the population pays income taxes, and this primarily consists of employees at large corporations. About half of India’s population does not have a bank account. Of those who do, only a fraction have access to mobile banking or credit cards (debit cards are more common among account holders).

India does not allow transactions in foreign currencies such as the dollar. Therefore, hoarding dollars happens, but is not critical. What is critical is non-payment of taxes facilitated by people using high-value bills for savings instead of banks. Large-denomination notes simply are impossible for the Indian government to track, which severely weakens the ability of the central government to function or use monetary tools to manage the economy. Taking the 500- and 1,000-rupee note out of circulation was a blunt instrument to flush out the money.

The move had an additional purpose. Like most global financial systems, India has some significant banking problems. The measure should help alleviate some of the liquidity and toxic loan problems India’s major banks currently face. Banks have been struggling to meet liquidity requirements, and therefore restricted lending to their own customers with their own substantial assets. This has curbed lending to smaller enterprises and individuals. To help deal with this in the past, the central bank injected money into the system via open market operation bond purchases. This solution had limits in terms of central bank funds and potential for driving inflation. This latest measure helps drive currency back into the banking system. Brokerages estimate that as much as $45 billion could be brought in by the demonetization scheme. India’s banking sector is already seeing a liquidity boom with an estimated $22 billion brought in so far, and this figure is expected to rise before the Dec. 30 deadline.

While the demonetization measures have potential long-term benefits, the government must also address the short-term chaos they have caused. Officials already have increased the amount of money individuals can withdraw from ATMs. New cash machines are expected to be installed soon and banks have been asked to temporarily waive ATM transaction fees. The plan also entails printing new 500-rupee notes as well as introducing a 2,000-rupee note. There are conflicting reports about whether printing began before or after the Nov. 8 announcement, but they indicate these new notes should enter circulation in coming days. The currency shortage will not be completely alleviated in a matter of days, but rather will start the relief process soon. Conditions should improve over the coming weeks as more notes enter the system.

On the whole, the Indian strategy was effective. It traded short-term disorder for a major strategic benefit. The goal was to force a great deal of the informal economy to put its money into the formal economy, thereby increasing the tax base and significantly affecting banking liquidity. Had the government not acted with shock and awe – and above all speed – holders of these notes would have developed strategies to avoid submitting to government scrutiny, paying taxes and moving their activities through banks. Had the government announced this two months in advance, it would have discovered what human ingenuity can devise. The way it was handled left very little room for maneuvering. Of course, some were tipped off and able to act fast. But in an economy that forbids the use of foreign currencies, holders of these bills had no room to fall back.

What appeared at first to be incompetence by the Indian government turned out to be a highly rational plan, trading short-term problems for a rationalization of its economy. This proves that while incompetence might be an explanation for current difficulties, we should begin by thinking of rational motives, which are more common, even when they lead to unintended consequences.