The concept of power lies at the center of geopolitics. Power, simply put, is the ability to achieve one’s desired outcome. When it comes to countries, the degree of power a country has determines whether it can fulfill its national imperatives – those almost eternal goals that a state cannot help but pursue – or whether it is subordinate to other states.

Many people believe that power can be broken down into two forms: soft power and hard power. Since Joseph Nye popularized the notion of soft power in the early 1990s, it commonly circulates in discussions about international relations. It is typically accompanied by a belief that hard power is a thing of the past (specifically the pre-World War II world) and that states in this “civilized” age engage in diplomacy and trade to get what they want. But some things never change, and there’s still no substitute for hard power.

Coercion occurs when country A has enough leverage over the interests of country B to control it – to force it to behave a certain way, even if that means going against country B’s will. Take Russia’s relationship with Belarus. Russia is the primary supplier of oil and gas to Belarus, which is almost entirely dependent on imports to meet its energy needs. Any time Minsk threatens to act in a way contrary to what Moscow wants, the Kremlin threatens to cut off its energy supplies. Unsurprisingly, Minsk eventually complies, even if that means doing something it doesn’t want to do, such as paying higher prices for natural gas imports. 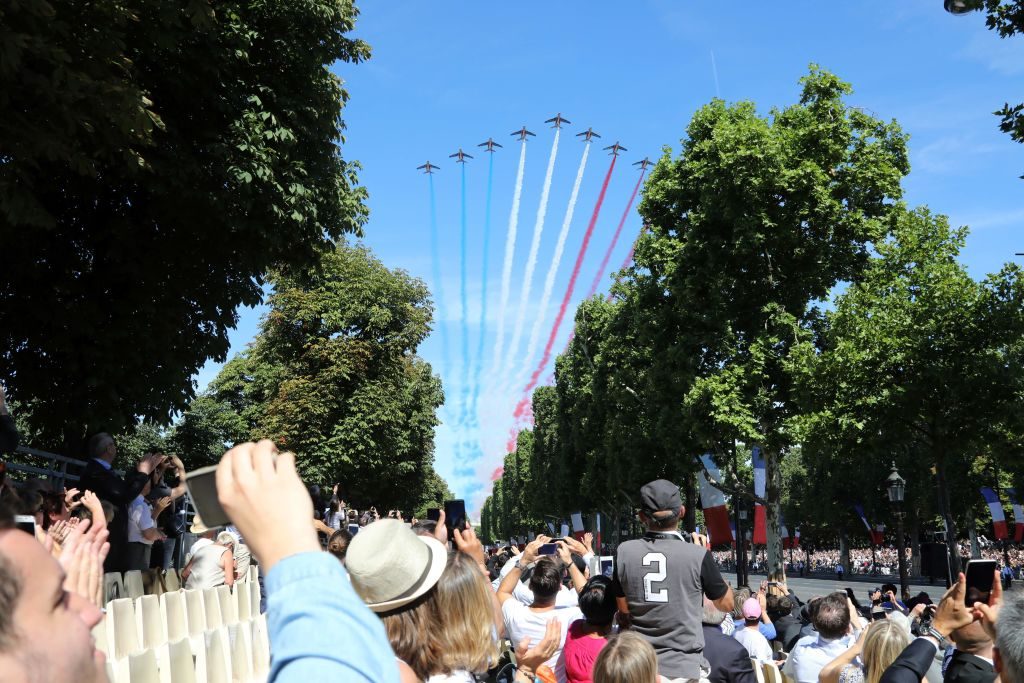 Nine French Alpha jets in a “Big Nine” formation release smoke in the colors of the French national flag during the annual Bastille Day parade in Paris on July 14, 2017. LUDOVIC MARIN/AFP/Getty Images

On the other hand, persuasion occurs when country A lacks leverage over country B but still wants country B to behave a certain way. The absence of leverage means country B must decide on its own to comply with country A’s desire. This approach is often ineffective because, when there is no pressure to act one way, a country will do whatever is in its best interest, not what is in the interests of someone else. Gestures go only so far. Still, countries engage in soft power strategies because soft power provides a way to potentially achieve an objective at a lower cost than the alternative, and because hard power isn’t always an option. The U.S. courting Brazil to enter World War II on the side of the Allies is an example of the first cause, and China’s current relationship with the Philippines is an example of the second.

Brazil was neutral for most of World War II. Its government and its people were split on whether to back the U.S. or Germany, and many people don’t even realize that Brazil did eventually send troops to Italy to fight for the Allies in the final months of the war. Brazil was of interest to the U.S. because its northern coast would help cement control over the Northern Atlantic and would open up control of the Southern Atlantic. The U.S. soft power campaign consisted of diplomatic visits, trade and cultural exchanges, such as creating films featuring Disney’s Ze Carioca (Donald Duck’s suave Brazilian counterpart) and Carmen Miranda (the Brazilian bombshell with her own star on the Hollywood Walk of Fame) for consumption in both countries.

The soft power approach gradually swayed Brazil toward the U.S., culminating in a diplomatic gesture: severing ties with the Axis powers. But Brazil stopped short of declaring war. In response, Germany initiated a submarine campaign targeting Brazilian merchant ships. It sank dozens of ships and cost hundreds of lives. In the end, it was Germany’s hard power response that spurred Brazil to enter the war on the side of the Allies.

A modern-day scenario, and one that shows soft power being used when hard power isn’t an option, is China’s approach to the Philippines. To guarantee its supply chains and trade routes, China needs direct access to the Pacific Ocean and South China Sea. The islands that make up the Philippines stand in the way of this access, so it is in China’s interest to control those islands – or at least to be able to influence the people who control those islands. Complicating matters for China is the fact that the U.S. military is the security guarantor for Pacific water traffic, and the Philippines relies heavily on the U.S. for trade and security cooperation. Though China could overpower the Philippines, it cannot take on the U.S. to win control over the Philippines. Instead, it has resorted to channeling large investments and other trade deals to win over Manila. At best, this may lay the groundwork for future levers over the Philippines, but for now, Manila has decisively sided with the United States, which guarantees its security but does not directly challenge its sovereignty and is a strong economic partner.

Nevertheless, many remain fixated on soft power. Just this week, a U.K.-based consultancy firm called Portland, in cooperation with the USC Center on Public Diplomacy, published a report ranking the world’s top 30 countries by soft power. The ranking is based on the composite score of soft power elements: culture, digital footprint, government, engagement, education and business/enterprise. The first thing that stands out is that European countries dominate the list, and these countries outrank others that are geopolitical heavyweights. Ireland outranks Russia, and Greece is above China. In fact, Russia, China and Turkey are all in the bottom six of this top-30 ranking. That two small European countries are considered more powerful than three much larger countries – countries that are major geopolitical centers of gravity – should automatically raise questions about the credibility of soft power.

A second observation is that most of the countries at the top of the soft power ranking – France, the U.K., the U.S. and Germany – are also among the world leaders in hard power. The U.S. has regularly demonstrated that through hard power measures such as sanctions or military activity, it can coerce other countries to change their behavior. Germany is the economic powerhouse of the European Union and has threatened economic measures against smaller EU countries, especially Greece, to coerce them into supporting EU regulations. France’s cultural influence – a component of soft power – does have global reach, but the foundation for this cultural influence was colonization, a product of hard power.

Soft power reads well on paper, but its dependence on persuasion makes it largely inconsequential in the world of geopolitics, whereas hard power dictates reality and the course of events.

For the Saudi Military, Arms and Assets Aren’t Enough

The US’ Big Plans for the Indo-Pacific

The Caribbean: An Overlooked Source of US Power

The EU Wasn’t Built for This