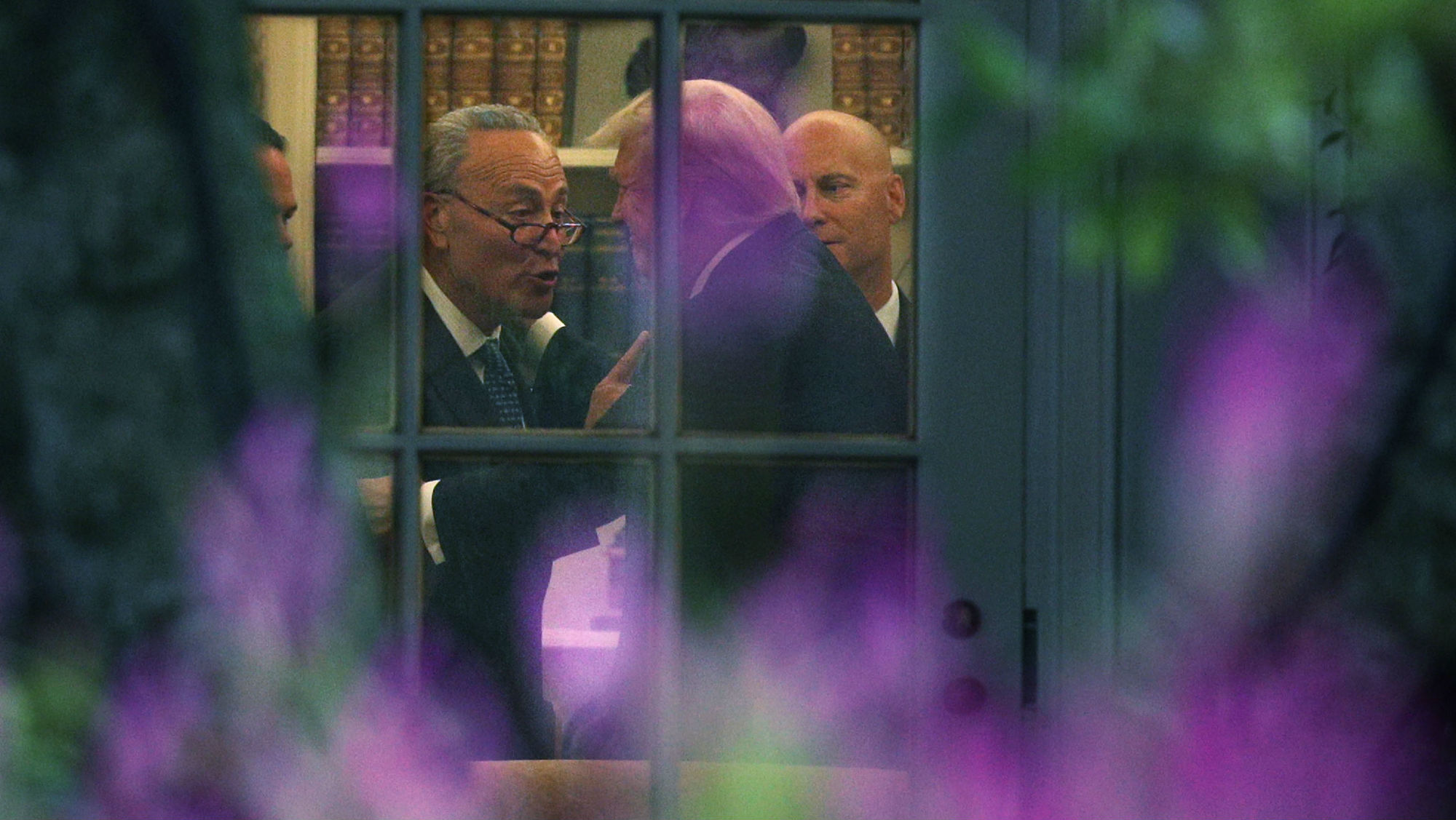 One of the core principles of geopolitical forecasting is the idea that political leaders have far less personal power than they are assumed to have. They live in a universe of constraints that not only limit what they can do but also shape their agendas and actions.

When leaders take office, they are faced with complex and competing interests. As a result, the distance between what they say they want to do, what they actually intend to do and what they ultimately do can be dramatic. This is doubly true in the United States, where the founders created a system of government designed to constrain the powers of the president through several institutions: a Congress divided into two houses, running by different rules and populated by representatives who answer to their own constituencies; a Supreme Court answerable to no one and itself divided into factions; and sovereign states that are frequently free to disregard the federal government. Combine that with a dangerous world and an economy out of everyone’s control, and the president can do relatively little. This is the way the world is, and the founders compounded its complexity.

President Donald Trump is now experiencing this complexity, but it’s hardly unique to him. As his presidency is at an interesting point, it is worth pausing and observing the constraints he’s up against and his response.

During the campaign, Trump promised, as all candidates do, many things, from a confrontation with China over trade, to a wall between the United States and Mexico, to repealing Obamacare. As with all presidents, it is hard to parse what he truly believed and what he said only to get enough votes to win the election. But that was his first constraint: to create a platform that might give him victory.

There is a vast difference between running for office and holding it. What he has promised his supporters and what he can deliver are very different things. I wrote several months ago about the problem that was looming, and it is now here. Trump’s approval ratings are in the high 30s. Many of his supporters deny that this is true, but what matters is only whether the Republicans in Congress believe it. They do, and that is Trump’s biggest political problem.

The rule of thumb is that the country is roughly divided 40-40-20 between Republicans, Democrats and independents. When a president’s rating is 40 percent or lower, it means that his support is down to his political base. To be re-elected, he must boost his ratings to at least 50 percent regionally distributed, and that means he can’t follow policies that please only his base. And in order to govern, he must have his own party in Congress united behind him. That isn’t going to happen with approval numbers in the 30s.

All representatives in the House and one-third of senators face election in a little over a year. They will be asking themselves this question: Does being close to Donald Trump help or hurt my re-election chances? If one faction of the Republican Party – traditional conservatives, tea partiers or evangelicals, for example – opposes the president, it’s hard for a member of Congress backed by that faction to support him. But if the president is extremely popular, being close to him may generate even more support. All members of the House and Senate facing re-election are calculating how close to the president they want to be. Many have concluded that supporting him, at best, does nothing to help them and, at worst, will cost them their seats. Bear in mind that Trump ran an insurgency against the Republican leadership, and he therefore lacks the kind of loyalty they would normally have for a Republican president.

Trapped by His Own Strategy

Trump’s problem is that if he fails to deliver what he promised, his core supporters will abandon him. That would make Republicans even more indifferent to the president’s wishes. But he is also trapped by the bitter opposition from Democrats and independents. It seems impossible for Trump to win the support of people who didn’t vote for him. Trump can’t govern with the support of only his base, which could itself become shaky, but he also will have an extremely hard time expanding his support. The strategy that got him elected has also trapped him.

Trump had to broaden his support; his options, however, seemed limited. But when all other solutions are impossible, a president is compelled to select the improbable. He therefore reached out to the Democratic leadership, Senate Minority Leader Chuck Schumer and House Minority Leader Nancy Pelosi, who are despised by his base. He is working with them on a deal to possibly cement the Deferred Action for Childhood Arrivals, or DACA, protections and provide more border security, though the Democrats say they will not support a border wall. It was a high-risk move in a situation where all other moves were closing in on him. 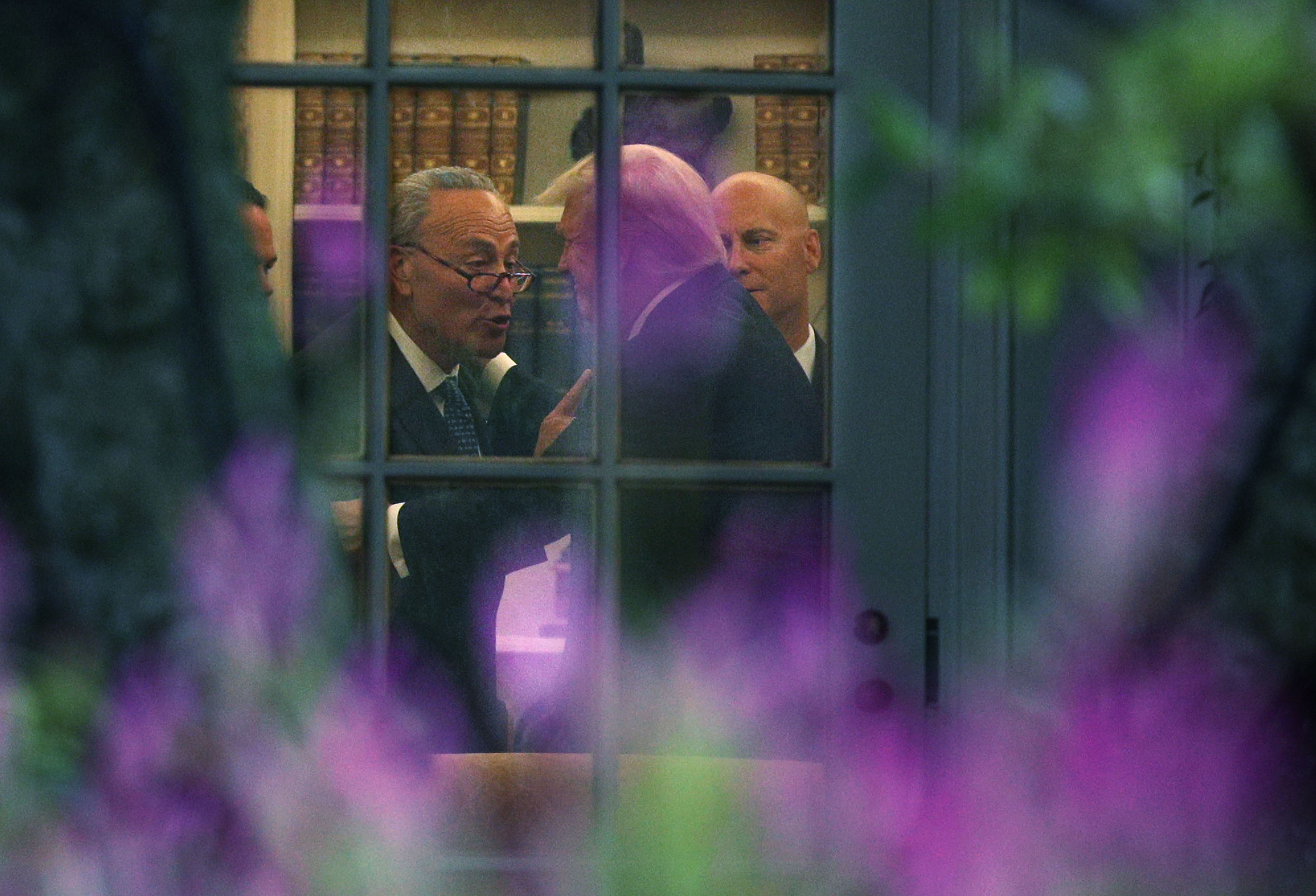 U.S. Senate Minority Leader Chuck Schumer (L) speaks to President Donald Trump in the Oval Office prior to his departure from the White House on Sept. 6, 2017, in Washington. Alex Wong/Getty Images

This left much of Trump’s electoral base stunned, but more important, it shocked congressional Republicans. Trump ran against the Republican establishment and has no love for House Speaker Paul Ryan or Senate Majority Leader Mitch McConnell. But what he did with this move was set the stage for blaming his own party for undermining his agenda; he will likely argue that he saved his presidency from the Republicans. If Trump is successful with that argument, and his track record indicates that he may be, then congressional Republicans could face a revolt next year. That could blow up on Trump, but now the calculation is no longer whether Trump’s backing helps or hurts Republicans running for re-election, but whether he can make the charge that Republicans betrayed his agenda. Betting against Trump on such a maneuver is dangerous; it might panic the Republicans into line.

Why did Pelosi and Schumer agree to work with Trump? The most obvious reason is that it could create utter chaos in the Republican Party and destroy the party’s chances in the next election. In other words, they are betting that Trump can’t pull this off. They aren’t risking that much among Democrats both because it could disrupt the opposing party and because, so far, the issues they have cooperated on are important to Democrats. Trump, on the other hand, might be hoping that he can not only bring Republicans along but also generate chaos among the Democrats.

Trump was in an enormously difficult position. The North Korea situation was evolving completely out of his control, and he was still depending on China to solve the problem. With an upcoming visit to Beijing, he really couldn’t afford Republican paralysis. That was another reason for him to try to shake up the situation.

His situation was untenable. There was no risk-free option. Unable to expand his base, he could not control Republicans in the House and Senate. His election campaign strategy had created a set of constraints that required him to redefine the game. He may well lose the bet, but that’s not certain. What is certain is that, like every other politician, constraints will define him.