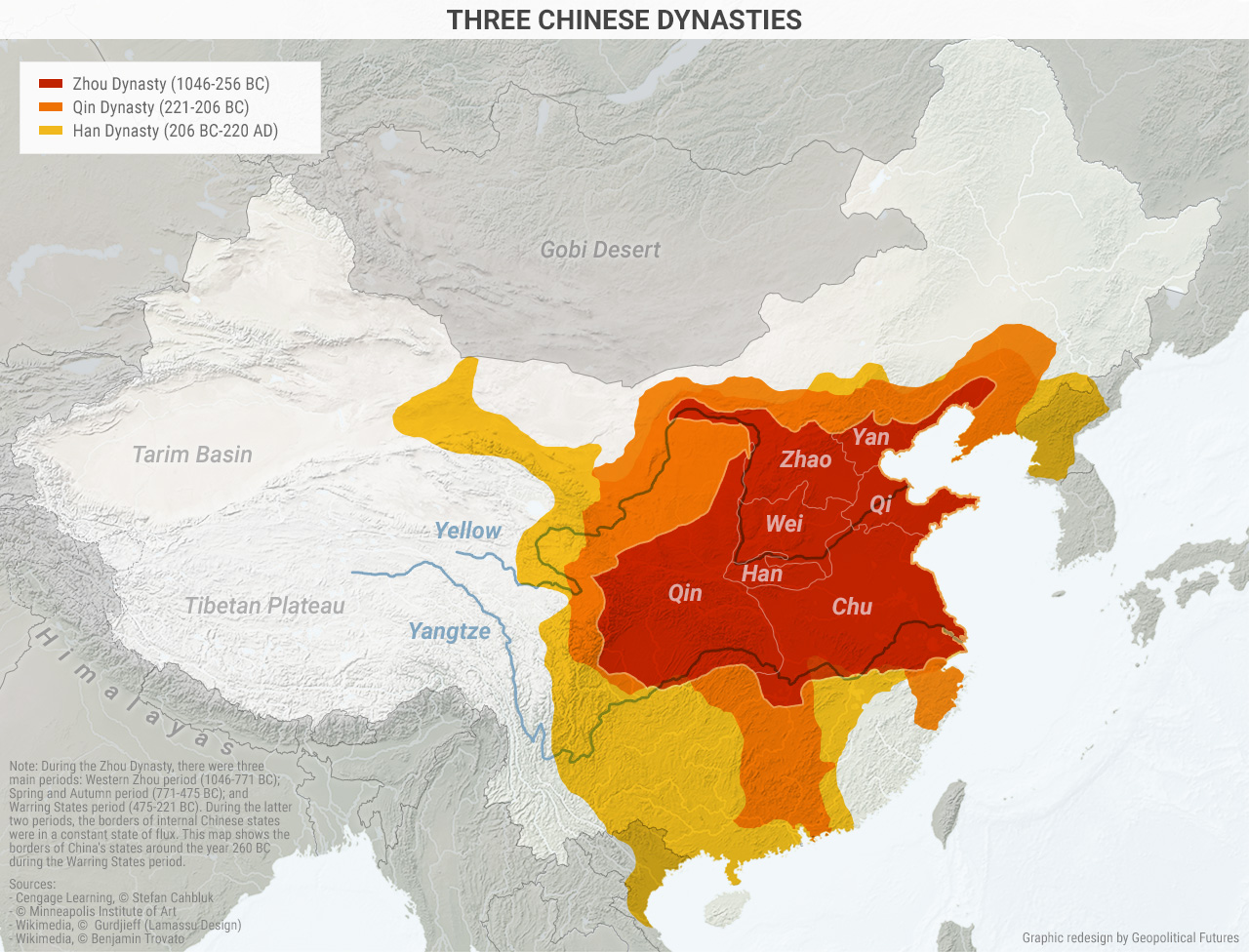 This map simplifies a brief part of that ancient and imperial history, and tells us much about the way China works today. The map shows that the core of China has always been the fertile areas around the Yellow and Yangtze rivers. It shows that there have always been parts of China – particularly in the north, south and east – that China struggled to control and that created vulnerabilities. The map also demonstrates how Chinese power has often extended into neighboring areas, such as present-day Vietnam and North Korea.

The other element of Chinese history this map expresses is the back and forth between a gravitational force encouraging unity and a centrifugal force for fragmentation. The Zhou Dynasty was the first to divide China into administrative states to better rule the country, but after approximately three centuries, central power became diffused and regional conflict and warlords reigned for over 500 years. The map takes a snapshot of just one point in that period – in the year 260 B.C. during the Warring States period – and shows the seven most powerful states competing for influence at the time. The choice of that particular year was arbitrary – during these time periods, internal boundaries shifted almost yearly due to competition.

The Qin state eventually became the Qin Dynasty and unified the country. Shortly thereafter, the Han replaced the Qin, extending China’s borders far beyond any previous dynasty. The Han left a cultural imprint so deep that the majority of modern China’s citizens refer to themselves as the Han people. This cycle repeated itself consistently up until the current era. The Han Dynasty faced numerous challenges to its rule and eventually was succeeded by competing dynasties and states that at times were strong and unified, and at times came apart at the seams. The last Chinese dynasty, the Qing Dynasty, fell in 1912, but that did not stop this historical pattern. Before the People’s Republic of China could be declared, China would fight decades of civil war and be invaded and dominated by neighboring Japan during World War II.

The People’s Republic of China is one of the strongest and most centralized governing forces ever to rule the area. But strong as it is, it cannot hide from the forces of geopolitics. Those forces are easily observable when looking at a map of China’s ancient and imperial dynasties, and those forces remain very much alive today. The Chinese Communist Party’s greatest fear is a return to the regional divides that have been a constant throughout China’s long history. It is why the party seeks such a high level of control over the country, and why President Xi Jinping has embarked on a set of anti-corruption purges to solidify his power base. Both the party and Xi know what the alternative is, and are therefore working to avoid it at all costs.