The United States and Britain have agreed to sign a trade agreement by next July, The Sun newspaper reported on Monday. The accuracy of the story is not yet clear, but for Britain, leaving the European Union and building a closer trade relationship with the United States, and therefore with North America, follows geopolitical logic.

Britain’s historical stance toward Europe was to try to maintain a balance of power on the Continent so that no force there would be able to threaten British sovereignty. One force driving British imperialism was the need to develop markets and sources outside Europe so as not to become excessively dependent on Europe. The Royal Navy was designed both to protect Britain from continental powers and, in time of war, to blockade hostile European powers without being excessively drawn into combat on the Continent. The British hesitated for a long time before agreeing to join the European Community and the powers on the Continent (particularly the French) hesitated for a long time before admitting them. The British were instrumental in creating the “Outer Seven” bloc of nations on the Continent’s periphery as an alternative to what would eventually become the European Union.

For Britain, the consolidation of the Continent into a single bloc was a perpetual nightmare. Britain was militarily weak compared to the Continent as a whole and saw Napoleon, for example, as an existential threat. Had he been able to impose a stable system, dominated by Paris, on the Continent, the economic and military force he could have mustered would have overwhelmed Britain’s naval defenses in the not-too-long run and compelled Britain to accommodate itself to French hegemony. In this hegemony, it would have found itself at a perpetual disadvantage (as would other nations) as France tilted the economic system in its favor. It therefore joined the anti-Napoleonic alliance and, after Waterloo, cautiously withdrew from the Continent and focused on its empire.

With the unification of Germany in 1871, however, Britain was drawn into Europe once again. It first found itself in economic competition with the new European power, then in political competition over empire, and finally was drawn into the two world wars. The point that must be borne in mind was that membership in a European bloc ran counter to historic British views of Europe. The British fear was that the constraints imposed by any European alliance would inevitably tilt the economic system against Britain and threaten its sovereignty.

World War II left Britain in a difficult position. It had essentially bankrupted itself in the war against Germany. The effort to resist the Continent in order to guarantee its sovereignty and prosperity had preserved sovereignty at the price of prosperity. It had also decisively brought another nation into the dynamic: the United States. At the end of World War I, the United States had the same perspective as the British. A German victory would unite Europe and create naval forces that would limit U.S. access to the seas. The U.S. wanted the same thing Britain had wanted: to prevent a single hegemon from controlling the Continent, and therefore to maintain division of the Continent through a balance of power. This was the intent of the Treaty of Versailles, which blocked France from dismembering Germany and achieving Napoleon’s goal of dominating the Continent. Versailles also set the stage for World War II, once Germany had reorganized itself.

From unification onward, Britain’s primary threat was not France but Germany. World War I settled the problem only temporarily, drawing both the British and Americans into a war on the Continent. The conflict also reversed the relationship between the United States and Britain. Neither had fully trusted the other. After World War I, the U.S. maintained a set of war scenarios that included War Plan Red, which was based on a potential British invasion from Canada. Far-fetched as this might seem now, Washington had seen the British as a threat during the Civil War less than 50 years before, as well as a naval challenger in 1900. Britain saw the American economic surge as a threat to its markets and vigorously limited U.S. economic relations with the empire. In 1920, the mutual suspicion continued; indeed, when lend-lease was enacted, the U.S. lent ships to Britain – but Britain leased almost all of its bases in the Western Hemisphere to the U.S., ending centuries of domination of the Atlantic and a perpetual threat to the United States. The two countries cooperated in World War I, but isolationists in the U.S. remained suspicious of British motives in the war.

World War II ended with Germany partitioned, the British Empire crumbling and the United States the dominant power. The U.S. and Britain were allied in the conflict, but it would be a mistake to think they were close partners. In 1956, the U.S. blocked Britain (and France and Israel) from retaking the Suez Canal. President Franklin Roosevelt had made it clear that the U.S. was fighting to defeat Germany and not to save the British Empire. The two countries were imperfectly aligned, to say the least.

The Marshall Plan made European economic integration a prerequisite to recovery. In a way, the EU originated as a U.S. plan. But the U.S. focus was not European integration. Washington was worried about the Soviets and wanted a prosperous, united Europe that could field a military. The British were uneasy about integration, and the French were cautious about Britain. The old tensions did not dissolve. Nor did German weakness. The U.S. needed Germany to recover, since Germany would be the battleground of any future war. And so it did, and over time an integrated Europe became a German-dominated Europe, benign militarily, aggressive economically.

The British had to develop a new grand strategy suitable for their new position. Britain’s strategy was to maintain its distance from Europe by building a special military and intelligence relationship with the United States, while cautiously dipping its toes into European integration. In other words, the British managed to maintain a European balance of power while at the same time creating a balance between Europe and the United States, using the space this opened to pursue their own interests.

This has forced Britain to look to the United States as it had during the 20th century. Britain’s military and intelligence relationships with its former settler colonies (the United States, Australia, New Zealand and Canada) were an important dimension of its global vision. They were also foundational to the American alliance system, with all five countries participating in the “Five Eyes” intelligence-sharing group and maintaining intimate military cooperation. Canada and Australia have significant trade agreements with the United States, and New Zealand is negotiating one.

Britain sees this structure as an alternative to the European Union. On security matters, Britain is already part of this coalition. Economically, North America’s total gross domestic product is larger than that of the EU. Add Australia, New Zealand and Britain and this economic group is substantially larger than the European Union and, in many ways, more dynamic. And given U.S. sensitivity over its own sovereignty, it does not make demands on social and political harmonization, nor does it dictate rules on migration. Britain already conducts substantial trade with all four nations, which requires a degree of integration, but it’s limited to market access on favorable terms. 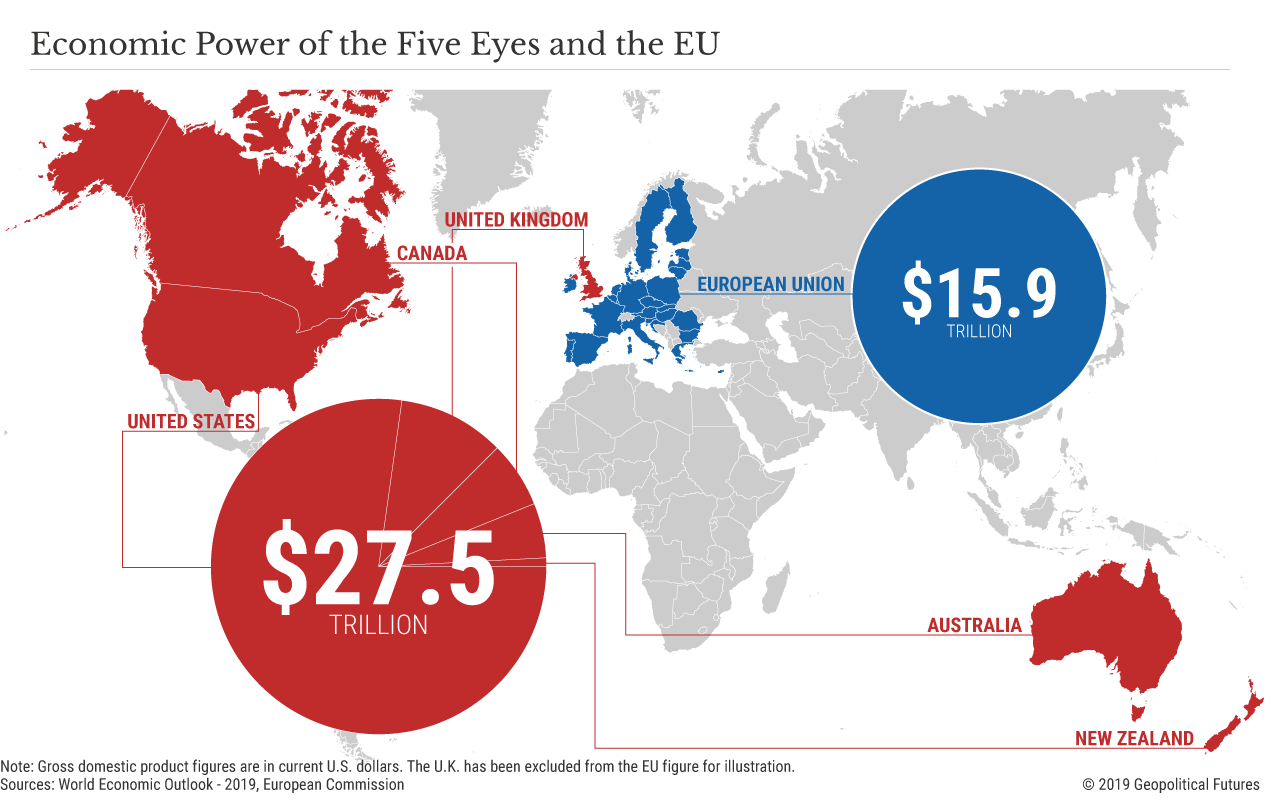 The problem for Britain, however, is that a shift in economic posture would end the long-term balance of power strategy. On the other hand, staying in a bloc that has no interest in the internal harmonization of Britain would be damaging. A shift would be complex and painful, but the pain Britain is feeling now from the split inside of its country is at least as unbearable.

If Britain shifted economically to this bloc, we would be seeing the emergence of a loose economic and security alliance. It would be a bloc of the settler colonies Britain spawned. The weight of this group in world affairs would be massive. For the United States, this would be nice to have. For the Canadians, it would be more tense. For the Australians and New Zealanders, it would be business as usual. But nowhere would it be as fraught with tension as in Britain. Brexit is going to happen, and Britain must imagine what life will be like after its withdrawal. A trade agreement with the United States is the logical and even inevitable step, but one with long-term significance.

Germany and Russia: The Long Dance