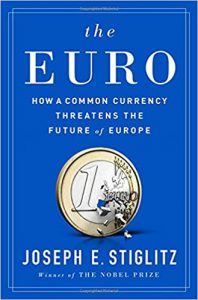 The Euro: How a Common Currency Threatens the Future of Europe
By Joseph E. Stiglitz

I find it very difficult to track down a book on the euro that is neither too technical nor too simplistic. Joseph Stiglitz’s “The Euro” is an exception. Let me begin by acknowledging Stiglitz’s political positions and by saying that this book is not exempt from some (minor) political bias. But at the same time, this does not compromise the quality of the analysis.

Stiglitz begins by describing the broken promises of the European common currency and explaining the reasons for this failure. In particular, Stiglitz argues, according to the European elites the euro should have brought prosperity and, above all, economic convergence among eurozone members. Once achieved, economic convergence should have brought political unity. However, especially after the 2008 financial crisis, the common currency failed to live up to its promises, and the gap between the economic performances of the eurozone states not only did not shrink but grew even bigger. The reason behind this has to be found in the structure of the eurozone and the common currency, which was, according to Stiglitz, flawed from the beginning. It is utterly complicated – if not impossible – to summarize Stiglitz’s thoughts on the euro in a few lines, but the main argument is that the common European currency lacks the institutions that would have helped it to function and that a single currency for 19 countries does not take into account the differences among them, in economic but also in political and social terms. In other words, one single monetary policy cannot work for 19 different states, especially when fiscal policy is not centralized.

Besides the structural flaws of the euro, Stiglitz also analyzes the macroeconomic policies that have characterized the euro area. According to the economist, the current woes of the eurozone were caused also by “bad” policies. In particular, he makes the case against a monetary policy whose goal is price stability and not full employment. He then continues by explaining why the cure to the crises of the past decade – austerity measures – was even worse than the disease. However, he highlights different potential solutions to the problem of the eurozone. According to Stiglitz, not everything is lost: One path might be increasing European integration, leading to the creation of a banking union and establishing a mechanism for debt mutualization at the European level. Another solution could be what he defines as an “amicable divorce,” namely a coordinated return to national currencies. Finally, another solution can be found in more flexible eurozone rules.

The solutions outlined by Stiglitz have little geopolitical and political foundations, as they are quite unfeasible at the moment, and therefore they would work only in theory. But a geopolitical analysis is not among this book’s goals. Stiglitz wants to analyze the macroeconomic contradictions of the euro, explaining why it did not bring convergence among eurozone states and why it is structurally flawed. And I think that the main takeaway from this book is that, according to Stiglitz, the European common currency in its current design is doomed to fail. 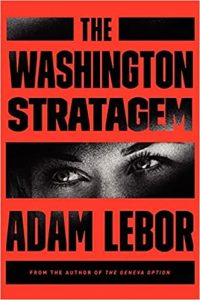 The Washington Stratagem
By Adam LeBor

The United Nations, a notoriously bureaucratic and complex institution, might not seem like the most natural setting for a thriller novel. But in “The Washington Stratagem,” it’s the main backdrop for a story about secret deals, corruption and backdoor negotiations with international implications.

The protagonist, Yael Azoulay, works closely with the U.N. secretary-general, Fareed Hussein, as a kind of fixer on projects that rarely get public scrutiny. Her latest assignment is to apply pressure on the head of the Prometheus Group, a lobbying and asset management firm with connections to the Pentagon and questionable ties to the Middle East. In a carefully arranged meeting, she accuses the firm of doing business with Iran, including with the Islamic Revolutionary Guard Corps, despite U.S. sanctions prohibiting American firms and their foreign subsidiaries from working in the country. But Prometheus has ties to the U.N. too, making its activities even sketchier and Yael’s work more delicate.

Although the story is fictional, it exposes the moral hazards inherent in high-level diplomacy. Even institutions meant to focus on peacekeeping, humanitarian work and economic development are rife with corruption, skewed agendas and personal relationships that can muddle the broader cause. This is especially true the higher up in the ranks you go: The institution’s altruistic goals get murkier, and personal and professional ambitions get stronger. It’s a cynical view, but one that seems to ring true in real life examples too. It’s worth noting that “The Washington Stratagem” is the second novel in a series, written by author and journalist Adam LeBor, centered on Yael Azoulay. I had not read the first novel, “The Geneva Option,” and found some parts of the beginning a bit confusing or lacking in detail. But any questions get cleared up quickly enough. Overall, it’s a good read with a compelling lead character and interesting commentary on the world of diplomacy.

What We’re Reading: All About Europe