Roughly 2,400 years ago, Thucydides, a Greek historian and author of “History of the Peloponnesian War,” expressed a view that resonates in strategic thinking to this day. He argued that the real cause of the Peloponnesian War was the rapid increase in the power of Athens and the fear this aroused in Sparta, which had dominated Greece thus far. Author Graham Allison used this concept in his book “Destined for War,” in which he described the relationship between the U.S. and China as an example of the “Thucydides trap” – the idea that the decline of a dominant power and the rise of a competing power makes war between the two inevitable.

Thucydides focused his writings and analysis on the structural tensions caused by a sharp change in the balance of power between rivals. He pointed to two main factors that contribute to this change: the aspiring power’s growing need for validation and its demand, either implicit or explicit, for a greater voice and strategic place in multilateral relations; and the current power’s fear and determination to defend the status quo.

In the fifth century B.C., Athens emerged as a powerful force that in mere decades had become a merchant maritime power, possessing financial resources and wealth but also reaching primacy in the Greek world in the fields of philosophy, history, literature, art, architecture and beyond. This irritated the Spartans, whose state had been the dominant land power in Greece throughout the preceding century.

As Thucydides argued, Athens’ behavior was understandable. With its rising power, its confidence also increased, as did its awareness of past injustices and determination to right the wrongs that were committed against it. Equally natural, according to Thucydides, was the behavior of Sparta, which interpreted Athens’ behavior as ungrateful and a threat to the system that Sparta had created and under which Athens was able to emerge as a great power. This combination of factors resulted in structural tensions and, subsequently, a war that devastated Greece.

In addition to the objective shift in the balance of power, Thucydides drew attention to Spartan and Athenian leaders’ perception of the situation, which led to an attempt to increase their own power through alliances with other countries in the hope of gaining a strategic advantage over their rival.

The lesson that Thucydides taught us, however, is that alliances are a double-edged sword. When a local conflict between Kerkyra (Corfu) and Corinth broke out, Sparta felt that, to maintain the balance, it needed to help its vassal, Corinth. The Peloponnesian War began when Athens came to Kerkyra’s defense after Kerkyra leaders convinced the Athenians that a de facto war with Sparta was already underway. Corinth also convinced the Spartans that, if they did not attack Attica, they would be attacked by Athens themselves. Corinth accused the Spartans of misunderstanding the gravity of the threat to maintaining a favorable balance of power in Greece. Although Sparta ultimately won the Peloponnesian War, both Athens and Sparta came out of the 30-year conflict in ruins. 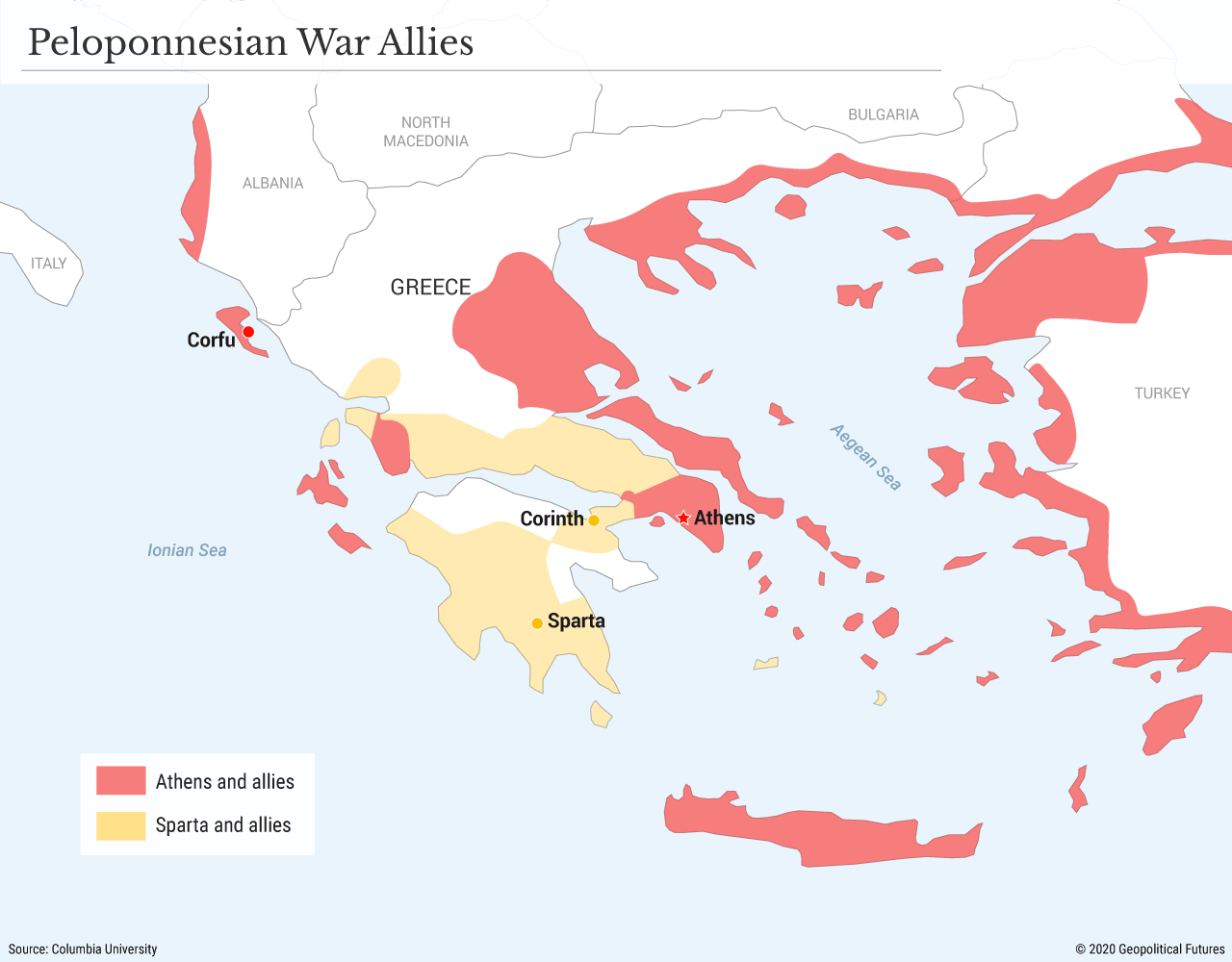 The Thucydides trap, which many now call a “security dilemma,” can also be seen in the context of U.S.-Chinese relations.

The United States is concerned about China’s growing economic power and military capabilities, believing that it could challenge the primacy of the U.S. and the existing security architecture in the Western Pacific and East Asia. China, meanwhile, is concerned that, so long as the Americans are present in this part of the world, they will limit the legitimate growth of Chinese power and influence.

Political scientist Joseph Nye believes that the key trigger in the Thucydides trap is an excessive reaction to the fear of losing one’s power status and prospects for future development. In the case of Washington and Beijing, the relative decline of America’s power and the rapid rise of China’s power destabilizes their relationship and makes it difficult to manage. Gen. Martin Dempsey, then-chairman of the Joint Chiefs of Staff of the U.S. Armed Forces, even admitted in May 2012 that his primary task was to ensure that the United States did not fall into the Thucydides trap.

As a result of the slow but noticeable erosion of the U.S. position in the Western Pacific, it is highly conceivable that a scenario could emerge in which the current hegemon is tempted to conduct a strategic counteroffensive in response to an incident, even a trivial one, in the South China Sea or East China Sea, believing falsely that it has the edge over its inferior rival. This would trigger a modern Thucydides trap.

An in-depth reading of Thucydides’ work reveals a second trap, even more complex and dangerous than the first. Thucydides clearly warned that neither Sparta nor Athens wanted war. But their allies and vassal states managed to convince them that war was inevitable anyway, which meant that both city-states would need to gain a decisive advantage at an early stage of the escalating confrontation. Thus, they decided to enter the war after being urged to do so by their vassal states.

According to research conducted in 2015 by a team led by Graham Allison at Harvard’s Belfer Center for Science and International Affairs, 12 out of 16 historical cases spanning the past 500 years and with similarities to those described above by Thucydides ended in a war of domination. Releasing the competitive tension, if that was even possible, always required huge and often painful adjustments to one’s expectations, status and international position.

As Allison recalls, eight years before the outbreak of World War I, British King Edward VII asked the British prime minister why there was disagreement with his nephew, German Emperor Wilhelm II, when the real threat to the British Empire was the United States. The prime minister asked for an appropriate response in the form of a memorandum from the head of the Foreign Office, Eyre Crowe.

The memorandum, delivered to the king on New Year’s Day 1907, was, as Allison writes, “a diamond in the annals of diplomacy.” The logic within it was truly consistent with Thucydides’ own: The key to understanding the German threat was understanding Germany’s ability, over time, to deploy not only the strongest army on the Continent but also the strongest fleet, given the growing strength of the German economy and Germany’s proximity to Britain. Thus, regardless of German intentions, Germany would pose an existential threat to Britain, its maritime power and the security of communication routes connecting the metropolis with the colonies that represented the backbone of the empire.

Three years later, both U.S. President Theodore Roosevelt and the German emperor attended Edward’s funeral. Roosevelt, himself a keen supporter of the expansion of the American fleet, asked the emperor whether Germany would give up building a large fleet. The emperor said Germany was determined to have a powerful fleet, and added that he grew up in England, felt part English himself and believed that war was unthinkable.

At that time, in 1910, world war seemed as impossible as it does now. But it turns out that cultural, spiritual, ideological and even family ties, as well as economic interdependence and the global trading system, are not enough to prevent conflict. Both then and now.

The World Ocean Versus the Continent