Two Turkish F-16s shot down a Russian Su-24 flying at 20,000 feet along the Syrian Turkish border. The Su-24’s mission was unclear. It may have been an airstrike or reconnaissance. Its precise location is also uncertain. The Russians say it was four kilometers inside Syria while the Turks assert it was inside Turkish air space. The Russians are not denying that it was operating at least on the edge of Turkish air space, and that means that they were not expecting their plane to be jumped by Turkish fighters. The Turks are not claiming that it was a case of mistaken identity, which means that they knew it was a Russian aircraft and meant to shoot it down. It seems to me that given the likely amount of reaction time, regional air defense command did not have to get political authorization to shoot. They were given rules for engagement and the intercept followed from that.

That means two things. First, that the Russians did not understand the seriousness with which the Turks were taking incursions. Second, that the Turks had reached the point, not where they didn’t care what the Russians thought, but where they cared very much and delivered the lesson they not only wanted to, but planned to. It also means that at 20,000 feet the ground border is a bit of an abstraction, and a few kilometers either way really didn’t matter. Neither side was exercising caution and trying to avoid an incident.

The Turks have followed a fixed strategy for the past decade or so consisting of two parts. The first was that there would be no problems for Turkey in a 360-degree arc around them called zero problems with neighbors. That strategy is gone. The second was that Turkey would avoid military engagements outside of Turkey proper, whether in the Balkans, the Arab world or the Caucasus. The corollary of this strategy on non-engagement had to be that no intrusion within Turkish territory was tolerable. If Turkey is not controlling its periphery beyond its borders with its own troops, it must control its own territory. 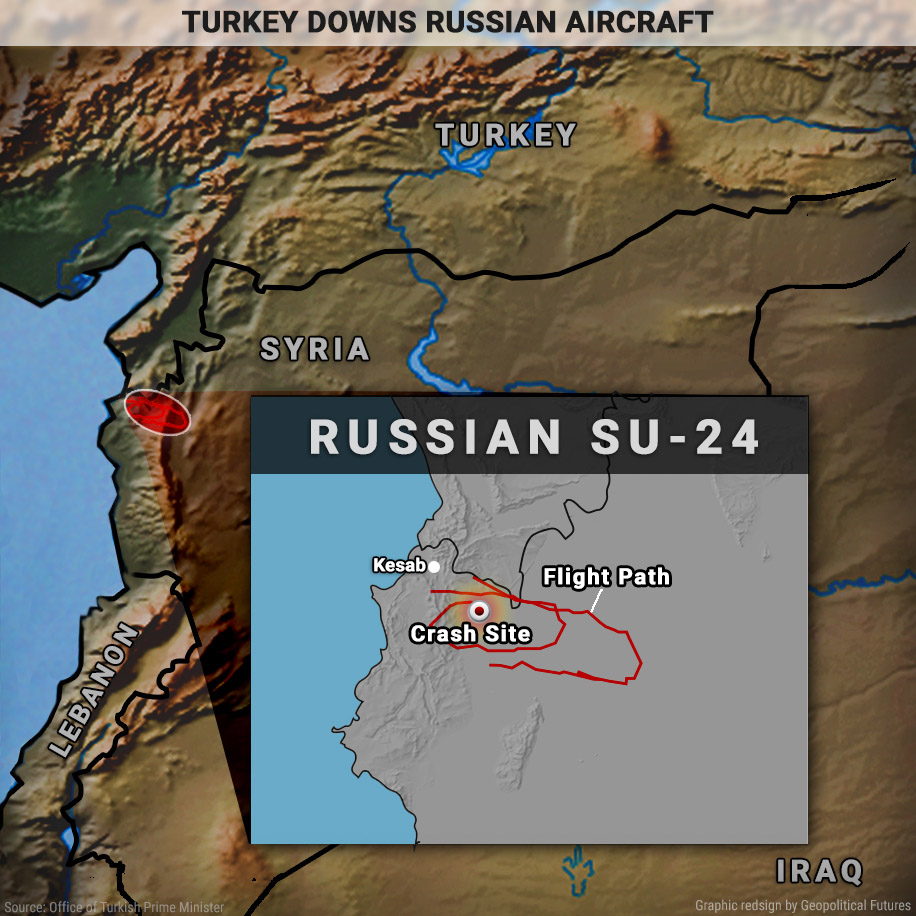 The danger inherent in this strategy is that the area beyond its borders will develop outside of Turkish control and that some force to the south will choose to intrude on Turkish territory. It takes only one power to decide there should be a war and any power that wanted to challenge Turkey could do so by crossing the border either as a conventional force or as terrorists. Either way, Turkey will, under those circumstances, have to engage on its own territory.

The only way to execute this strategy is to treat Turkey’s border as an absolute trip wire and respond with decisive force if there are intrusions and if it is possible to block the action. This is not necessarily common and in recent months, Turkey even let previous violations of its airspace go without taking action. However, in the case of the Su-24, the Turks decided that the Russians had to be stopped.

The reason was compounded by Russia’s strategy. The Russians intervened in Syria in large part as a response to Ukraine. Ukraine was on the whole a defeat for the Russians and they needed to reassert themselves. By intervening in Syria, they demonstrated that they had the ability to project power into the Middle East, and intrude on a theater in which the Americans thought they were operating alone. It inflated the perception of Russian power beyond what it was, because its forces in Syria were far from overwhelming.

The second reason for intervention was to keep the Bashar al-Assad regime from falling. This was not out of love for Assad, but to prevent another reversal by having an ally toppled. This softened the American position because as much as the Americans disliked Assad, with the Islamic State (IS) deep into Syria, the fall of Assad might have meant an IS regime in Syria, and that was intolerable. So the Russians solved a problem they both had — preserving Assad at this time — without forcing the U.S. down this road. If Russian power was inflated as a result, the U.S. could manage this.

But to protect Assad, the Russians chose an offensive rather than purely defensive strategy. They supported Assad in an offensive northward, into a region occupied by Turkic community, but along the Turkish southern border. The Russians provide air and logistical support and troops were driving into this region. This region was part of Turkey’s strategy and by supporting the Turkmen minority along the border, they provided a buffer zone that could bog down any Syrian government’s attempt to close in on the Turkish border. The Turks therefore gained two advantages. The first was a buffer they could supply but didn’t have to send troops to occupy along the border. The second was supporting anti-Assad forces. It must be remembered that the Turks have been hostile to Assad for a long time now, even if unwilling to risk attacking them directly.

The Russian designed offensive against this borderland was what actually concerned the Turks. Not only were they Assad’s troops, they were also operating under a Russian aegis. The Turks have openly criticized the Russians for attacking the Turkmen areas on its border with Syria, but this is less about sympathy for a distantly related Turkic people and more about Turkey being concerned about Russia driving so close to the Turkish border. The area where the Assad regime and the Russians have been scoring victories is the area around Jabal al-Akrad in northwestern Latakia. It is in close proximity to the Turkish province of Hatay, a disputed territory going back to the French mandate period to which Syria has never formally renounced its claim. It is also a strategically important place to hold, especially if one’s goal is to protect the Assad regime’s Alawite core and Russian bases.

Focusing on capabilities rather than intent, the Turks saw the military operation as posing a threat to a core Turkish interest. They wanted to keep conflict outside of Turkey without committing its own forces to do so. The offensive brought hostile forces close to the territory forcing them to consider intervening on the ground, which violated their other strategic goal.

The Turks need to demonstrate their will without sending in ground forces to engage the Syrian Army or Russian advisors. The Russian tendency to ignore the Turkish border at 20,000 feet gave them the opportunity to do so. Clearly according to plan, they awaited the next intrusion and scrambled F-16s, taking down the Russian aircraft.

The Russians now have a problem. They had miscalculated the degree to which they had intimidated the Turks. That said the primary purpose of the operation in Syria was to demonstrate that they were a great power. If they let the jet incident go, for which Turkey makes no apologies, it will undermine one of their missions. If they attempt to retaliate they could risk an escalation that would bring in Turkish forces that would put their much smaller force at risk. They know the Turks don’t want to move south, they miscalculated how willing they are to defend their forces, and now Russia must find a solution that maintains the perception of power without triggering a Turkish action.

The real winner in this is the U.S. Turkey cannot afford to be hostile to both the U.S. and Russia, and can’t afford to be hostile to Russia without the U.S. The two countries have been moving to an uneasy understanding on IS and in moving closer to the Americans, that movement will accelerate. Of course the Americans want Turkey to move south against IS, which Ankara wants even less than engaging the Russians.

Turkey is also in a tough position, although not as tough as Russia. But this is a position that was bound to occur. Their general strategy could not stand up to the realities of a chaotic Eurasia. They will eventually have to move south, and the question is against whom.