Thirty years ago, on Nov. 9, 1989, the Berlin Wall fell. This was the beginning of a period that would change the world. When the last remnants of the wall came down in November 1991, it began four months that transformed all that had gone before. On Dec. 31, 1991, the Soviet Union ceased to exist; then on Feb. 7, 1992, the Maastricht Treaty was signed, creating the European Union. Like 1918 or 1945, this four-month period marked the end of one era and the beginning of another. It is 30 years since the beginning of this transition and its meaning is only now becoming visible.

Turning Points of the 20th Century

Europe in the 20th century had four turning points. The first came in 1918 with the end of World War I. It was also the end of Imperial Europe. The German, Austro-Hungarian, Russian and Ottoman empires all collapsed after the war, and the British Empire was not far behind. Nations like Poland that had been buried within one or more empires emerged as independent republics, some for the first time in centuries. Some were forged together into multinational states, like Yugoslavia or Czechoslovakia. The borders of others, like Hungary, were dramatically changed. Defeated Germany survived. Throughout Europe, the republican form of government took hold and, with it, supposedly liberal democracy. Emperors did not reemerge, but liberal democracy took hold only intermittently.

This was an era in which Europe as a whole was in a state of shock over what it had done to itself in World War I. The nations that were shed by the fallen empires clung to national identities from centuries before, but were not at all certain what they were now that they had reemerged into history, frequently with multiple nationalities sharing the same state.

This era ended in 1945. World War I originated in the unification of Germany. This was previously a region of fragmented duchies, which joined together under the management of Prussia and formed an empire under the House of Hohenzollern. From unified Germany’s inception, it was strong economically and militarily, but not strong enough to feel secure. With France on one side and Russia on the other, Germany could not survive a simultaneous attack from east and west, launched at a time of France’s or Russia’s own choosing. Germany was forced to conclude that it would have to launch a war at a time of its own choosing, knocking France or Russia out of the war first, then dealing with the other at its leisure. And, thus, the Schlieffen Plan was executed in 1914. It failed, leading to the end of empires.

During the interregnum between the two world wars, Germany emerged again, going from a cripple in 1932 to the dominant military power on the Continent by 1938. It faced the same strategic problem it had faced before 1914, and was defeated, as it had been in 1918. This ushered in the third epoch in 20th-century Europe: the time of Soviet-American hegemony. World War II ended with the Americans and Soviets meeting on the Elbe River and dividing Europe roughly along the lines they had conquered it. The Soviets held the band of countries from Poland to Bulgaria, and the Americans and their British allies held everything to the west.

The Era of the Iron Curtain

This was the time when Europe as a whole lost control of its fate. For Europe, ever since 1914, its fate had been war, the overriding question was whether, or more truly when, the Soviets and the United States would take Europe into war. The question of war and peace had been decided in London, Paris and Berlin. Now the question was decided in Washington and Moscow. It would be too much to say that Continental Europe constituted colonies. It would be more accurate to say that these were sovereign nations trapped in a geopolitical reality that tied their hands in relation to the world and cost them their empires. Europe was sovereign, but only in a very limited sense. The era of failed or monstrous states had put them in a position where no one, not even they themselves, trusted them to use full sovereignty wisely.

Europe was therefore divided by what British Prime Minister Winston Churchill called the Iron Curtain. Each side – the American-led NATO and the Soviet-led Warsaw Pact – prepared for a war that was fought everywhere except in Europe. As the European empires collapsed, the Americans and Soviets competed over who would inherit these empires. The issue was less who would control a country and more who would be stopped from controlling a country. The U.S. had little interest in Congo or Vietnam themselves; it had an interest in blocking the Soviets, and vice versa.

This diversion bought Europe time to recover, and it was in the interest of the United States to help it to recover. The Soviets were poor but powerful, and they controlled their region with tanks and few economic incentives. The Americans were powerful and rich, and they had far more to offer their zone, from the Marshall Plan to favorable trade relations. With these offerings Europe rebuilt itself, using American money and European intellectual capital. Germany retook its position as the most economically dynamic nation in Europe, this time abandoning strategic interests in favor of a purely economic Germany. Apart from the fear of war, which died down eventually, this was the happiest this part of Europe had been since 1914.

The other Europe, the one to the east, was less happy. Part of it was the ever-present Soviet power; the other and perhaps greater part was the penury in which this part of the Continent lived. The difference between a department store in Warsaw or Budapest and one in Frankfurt or Rome was startling. The simple fact was that the opportunities of life, from travel to luxury, ground on the Eastern Bloc, as much as ideology and freedom did. 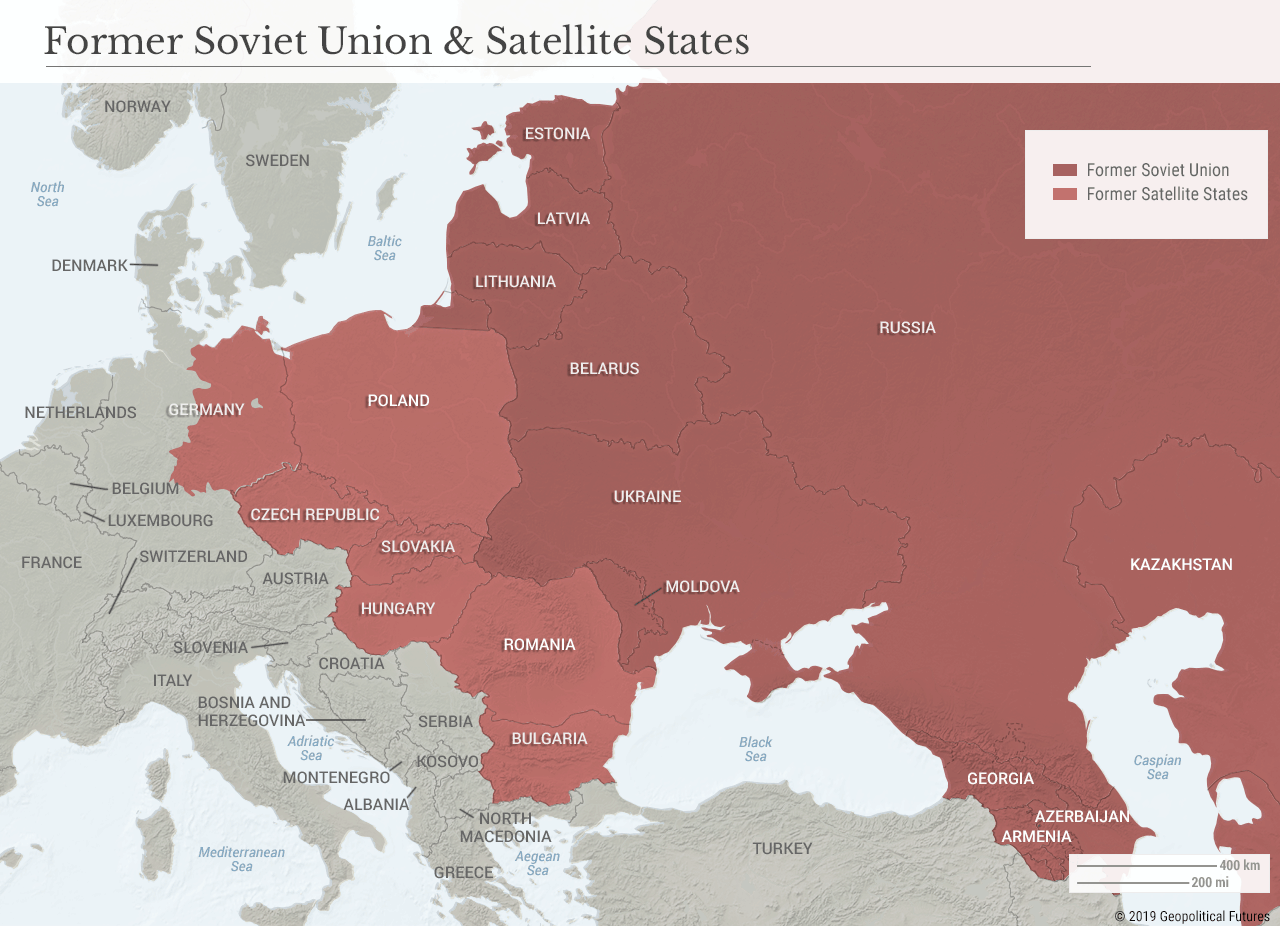 In the end, the division of Europe could not hold, not because of the defeat of one side or the other in war, but out of sheer exhaustion of effort for so little in return. The Soviet Union faced, as it does today, a crisis of increased expense spending and decreased oil revenue. That hurt, but it was not what weakened the Soviet Union. The Soviet Union simply failed to succeed and the comparison to life in the West created cynicism about the bombastic ideology, the parades in front of the Kremlin displaying weapons that were built for display rather than use, and the difficulty of getting an apartment without insect infestations. In the pattern of a normal life, the last is the worst.

The Soviets no longer believed in themselves, nor did they believe in the geopolitical boundaries Josef Stalin had won for them. They were not going to go to war, and spending money on tanks deployed in Germany or Hungary benefited no one. When East Germans began to go to camps in Hungary and the Hungarian border guards opened the barbed wire gates for them to walk through, the Soviets simply didn’t care any longer. Maintaining the Cold War meant that both sides had to care equally. Even though war was unlikely, the U.S. remained more concerned and disciplined. In the end the Soviet response to American vigilance was, “to hell with it.”

The wall came down and then the Soviet Union collapsed into the impoverished first decade, and the United States stopped caring. The fourth era had come to pass. Ushering in the fourth era was the Maastricht Treaty, an odd contraption. Europe had had a degree of economic integration since the Marshall Plan, which had mandated such integration, to much French resistance. Europe had developed into two economic zones, and then into one, the European Community, which was basically a free trade zone of sovereign nations. But when the Soviet Union collapsed and the U.S. stopped caring, they faced their fundamental problem.

The collapse of empires had created a plethora of free republics. It also permitted the reemergence of Germany, once again powerful and rich, once again insecure and, as time had passed, more vitriolic and enraged. What came out of that was World War II, savage destruction and hardship in Europe, and the loss of ultimate sovereignty. In November 1991 this all began to fade away, with neither a bang nor a whimper. It simply ended. The Europeans had been obsessed with the question of why there were two world wars, and how to never have one again. They answered the first question by saying that nationalism was the key. They answered the second by agreeing that nationalism had to be crushed.

The problem was that Europeans had been freed from empire in 1918, and whatever came after, they still cherished the thought of national principle. But in both cases, Germany had played an instrumental role in beginning and ending the era. Now Germany was no longer the vanquished but the economic arbiter of Europe. With the Soviet Union collapsed and the United States indifferent, Germany was the European power. So, the question became how to control Germany.

The European Union was not created for free trade; that existed already. It was created to solve the dangers of nationalism, particularly German nationalism, without assaulting the cherished principles of national sovereignty. So, the EU was created as a treaty of sovereign nations that pledged to stop acting as sovereign nations. This worked nicely, so long as the EU-monitored peace and prosperity reigned. But it didn’t last long. In the 1990s 100,000 Yugoslavs died in war. The Europeans had failed to contain war once again, but the explanation was that the Balkan states were not all that European, since they were not in the EU. But then in 2008, prosperity became more uncertain, and battles between sovereign states in the organization that controlled their sovereignty intensified. The EU was not delivering.

The fourth period has, in an odd way, created an imperial structure that permits a degree of sovereignty for its member nations, in return for a coordinated economic – but not military – will. It punishes states that resist, but most important, it has Germany as its economic center. The Germans are accused of fixing the euro to benefit themselves, limiting European economic and sometimes political choices, and so on. The EU has been and increasingly is a German question.

In each of the steps on the road today, the German question has in some way been central. It triggered two world wars, it was the potential battleground of the third, and it resides at the center of the EU. The problem is that Germany is unlike other European countries in its productivity and its resilience. It is also a country that is always insecure, if not in military matters then in economic ones. Therefore, I think we are not at the end of history. It’s been 30 years since the first steps into this latest epoch, which means a new shift is possible, though it may hold off a decade or two. But, and this is my point, Europe is far from a stable structure. And that is always dangerous for the world.