U.S. President Donald Trump hosted Turkish President Recep Tayyip Erdogan at the White House on Tuesday. Later this month, Trump will travel to Israel and Saudi Arabia, along with Belgium, Italy and the Vatican. With all respect, Belgium, Italy and the Vatican don’t present the same degree of strategic challenges to the United States that three Middle Eastern countries do, so we should focus on the Middle East.

Normally, summit meetings accomplish little. The important discussions are held at a lower level before the meetings, and the summit primarily blesses what has been agreed to before anyone got on the plane. A communique of warm commitment to work together is released, and then the folks at the lower level get together to repair any misunderstandings that the national leaders might have stirred up.

Trump may change the rules of this well-worn game. Participants in high-level summits tend to work hard to hide substantial issues, which interferes with serious discussions. Trump seems inclined to confront important issues head on and even unexpectedly. At the same time, his meeting with Chinese President Xi Jinping seemed to end with remarkable amity, given the expectations for confrontation Trump had created. It’s important to see how he handles these meetings.

Yet in the end, presidents come and go, but strategic interests and geopolitical imperatives remain. Relations between nations do not change based on the feelings their leaders may have for each other. As proof, the United States and France have never gone to war (Vichy excepted) regardless of how irritating each side finds the other. Trump will bring his own unique flair to these meetings, but to predict what will come out of them, we need to understand the interests of all sides at the highest levels.

After World War II, the United States gradually inherited the British position. Two interests came to the fore. One was maintaining the containment of the Soviet Union, in part by supporting Turkey and countering pro-Soviet governments in Syria, Iraq and Egypt. For this strategy to work, Israel was an essential ally. Second, the United States had an overriding interest in securing oil from the Persian Gulf, particularly from Arab countries.

Those issues no longer define American strategy. The Soviets are gone, and oil is in oversupply. America’s new plan for this part of the world is to pull out of it, including Afghanistan, without allowing radical Islamist regimes to replace the crippled countries the United States has been supporting. Therefore, U.S. strategy focuses on defeating the Islamic State and weakening the Taliban with minimal increase in forces. The United States has decided to deploy additional forces in Afghanistan, for example, with the explicit intent of forcing the Taliban to the negotiating table.

This strategy has an inherent defect the United States is quite aware of. Any strategy that limits the amount of forces in combat and has as its primary goal allowing withdrawal without unacceptable consequences tends not to work, as was shown in Vietnam. So the United States needs a different approach, one based on building a coalition. Members of this coalition would depend on U.S. support, and they would carry the burden because doing nothing is as unacceptable to them as it is to the United States. This works on two levels. One is recruiting factions and ethnic groups to the alliance. The second is creating a coalition of states.

There are four major powers in the Middle East: Turkey, Iran, Saudi Arabia and Israel. None have the strength to control the region as a whole, but all have significant power in their own part of the region. Trump will be meeting with the leaders of three of these countries. He will not meet with anyone from Iran, but Iran is already aligned with U.S. interests in Iraq, playing a major role in training and commanding the Iraqi army fighting IS in Mosul and elsewhere. Iran is not doing this in alliance with the United States, but at this place and time their interests coincide: both fear the Islamic State.

When the fight is finished, however, so is their alignment. The United States sees Iran as a country that could evolve into a major power, and it sees a strong Turkey, regardless of government, as a country that can stop it. Iran wants to dominate Iraq, and Turkey may be the only nation that wants to prevent that more than the United States. The Turks were happy to have the Americans do it, and they don’t welcome the task, but the United States knows that Turkey will have no choice in the long run. And the Turks understand they will need American aid to do it.

The hurdle between the United States and Turkey right now is the Kurds. The Turks are tangled up with numerous issues at the moment, including Syria, IS, Russia and the Kurds. The Kurds are more fundamental to the Turks than the Iranians are. Southeastern Turkey is heavily Kurdish, and the Kurds dream of an independent Kurdish state, drawn from territory that belongs to Turkey, Iran, Iraq and Syria. Neither Turkey nor Iran is prepared to consider an independent state because, from their perspective, it could only come from the dismemberment of their countries.

The American strategy of creating second-tier allies includes recruiting and working with Syrian Kurds against IS. This cuts directly against Turkish interests. The United States sent a message last week with its announcement that it was arming the Syrian Kurds. This should make for an interesting confrontation between Trump and Erdogan, but it is telling that Erdogan is visiting Washington anyway. 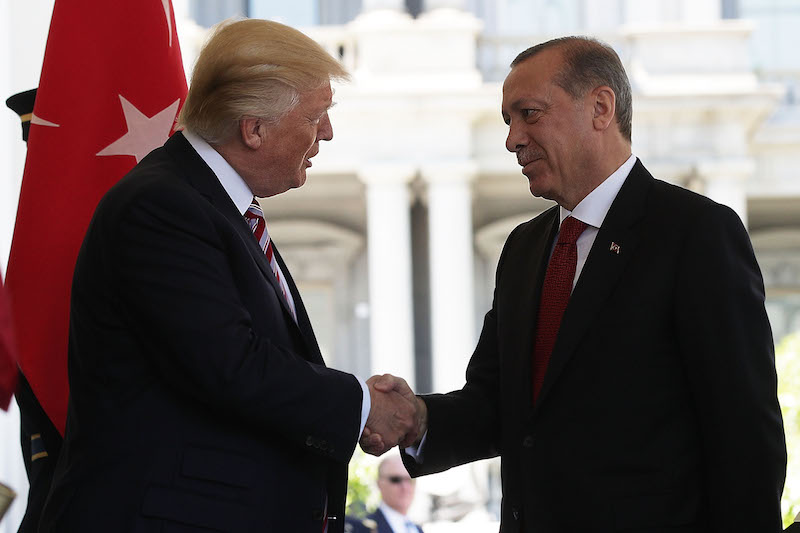 Still, while the Kurds matter a great deal, the Syrian Kurds are not as critical for Turkey. More critical to the Turks are the Russians, with whom Turkey has a long history of conflict. At this point, the Turks need the Americans to counter Russia, and the United States’ use of the Kurds against IS reduces the demands on Turkey. The Turkish regime is stabilizing itself after the attempted coup and doesn’t need its army, which is being restructured, to engage in conflict causing high casualties. The Turks will want to exact concessions from the Americans about what happens if and when the Islamic State is defeated.

Israel’s problem is that its grand strategy is to be indispensable to a great power. Israel was of significance to the United States during the Cold War. In the war that began on Sept. 11, however, Israel has not been of great value. Certainly, its intelligence is useful, but not enough to drive the relationship. Israel’s military could fight side by side with the Americans, but this would pose more political problems for the United States than it is worth. Besides, the Israeli military is designed to maintain control of its territory and to project power near its current borders. Except for special operations, its force is not designed logistically to operate at long distances. In addition, Israel could not afford to lend enough force to joint operations to significantly change the correlation of forces in areas of significant fighting.

During the Cold War, Israel brought geography to bear, as well as the forces to tie down and defeat Soviet allies Egypt and Syria. In the current conflict, Israel’s participation is limited by politics and military capability. Israel’s goal is to remain relevant to the United States while retaining its existing borders. The United States would like a settlement with the Palestinians, but it doesn’t want it enough that breaking with Israel makes sense. This is, for Israel, a dangerous position. Israel is not dependent on the United States right now in any significant way (the amount of U.S. aid is a small fraction of Israel’s gross domestic product), but neither is the United States currently dependent on Israel. The problem Israel has is that, should the strategic reality shift, Israel will probably need the United States more than the United States needs Israel. Therefore, the U.S. is unlikely to give Israel the things Trump spoke of in the campaign, while Israel will search for ways it can be useful to the United States short of major concessions. Atmospherics aside, the relationship will remain the same as under Barack Obama and other administrations since 1991.

In Saudi Arabia, Trump will have an entirely different discussion. For the Saudis, the Islamic State is an issue, but the price of oil is everything. The oil production cuts the Russians and Saudis agreed to have achieved almost nothing, and the pressure on the Saudi government remains the same. The Saudi kingdom consists of various tribes and factions, held together by the careful, politically difficult distribution of wealth. Low oil prices make it hard for the Saudis to maintain internal stability and also to try to develop an economy based on something other than energy. All other issues pale by comparison.

The United States wants to defeat IS, but there are limits to what it is prepared to do, and it is aware at this point that defeating one jihadist organization will simply lead to the creation of another. Modest increases in the price of oil are possible, but they will happen without the intervention of the United States. Washington has no intention of creating a domestic economic and political crisis by helping to raise oil prices just to help stabilize the Saudi regime. Besides, the United States doesn’t believe that the Saudis would fight IS even at $150 per barrel of oil.

Under most American presidents, the maneuvering would be carried out with the carefully scripted hypocrisy that summits demand. But this is Trump, who tweeted that if China helped on North Korea, it would get a better deal on trade. One of the interesting things about Trump is that on occasion he tells truths that are never uttered in polite company. From where I sit, the outcome of the Middle East trip is fairly obvious. The Turks will accept U.S. aid to the Syrian Kurds, the Israelis will neither give nor get much, and neither will the Saudis. What will be interesting is Trump’s deportment. By this I don’t mean rude outbursts, but rather, will he publicly reveal America’s position, thereby creating political problems in the three Middle Eastern countries in question? How Trump will say things and how much he will say is unclear, but the American position is really locked into place by reality that no president can ignore. Given all this, why hold meetings? There are many reasons, but one is that changing interests don’t end relationships. They redefine them. And this is an opportunity for all sides to grasp new realities. If this ends in misunderstandings and tensions, it will not be the cause of anyone’s problems. Those exist independent of meetings.