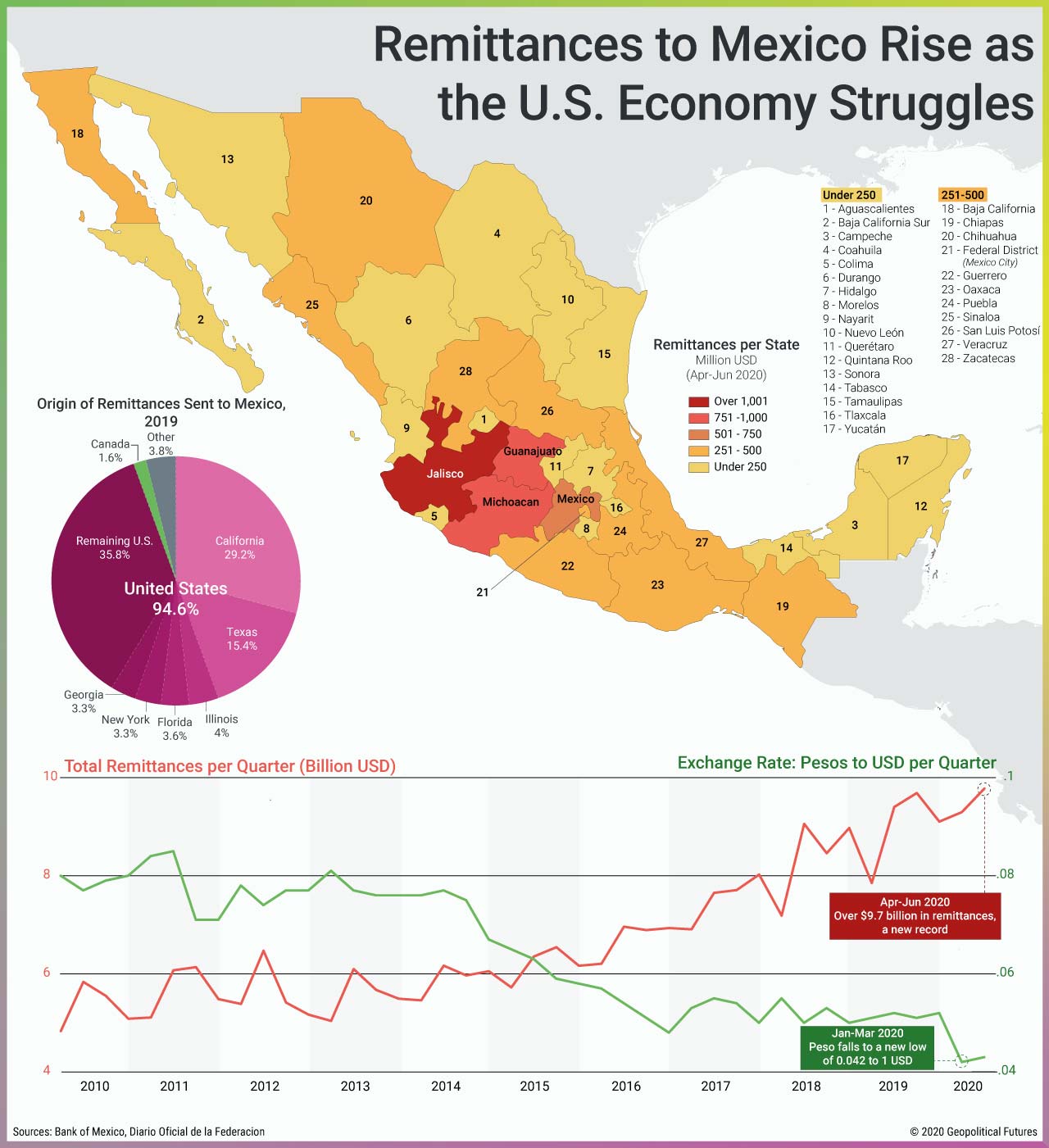 Remittances are a critical part of the Mexican economy, which ranks as the third-largest recipient of remittances globally, behind only China and India. Last year, remittances to Mexico totaled $36 billion, making them a larger source of U.S. dollars for Mexico than foreign investment, oil exports and tourism. In fact, many Mexicans – an estimated 10 million people, or roughly 8 percent of the population – would not be able to meet their basic health, housing and food needs without them. But when much of the U.S. economy went under lockdown, many expected that remittances to Mexico would take a severe hit. BBVA Bank, the leading private authority on the topic, predicted early on that they would fall by 21 percent in 2020. Surprisingly, however, remittances have actually increased this year, rising by 10.55 percent (totaling $19.07 billion) compared to last year.

Many explanations as to why this is have been offered; none appear decisive. Some economic analysts have claimed that the weakening of the peso relative to the dollar incentivized people to send more money back home. Though this could explain the surge in remittances in March, it does not explain the source of the dollars headed for Mexico. Others have suggested that the remittances have connections to the black market (i.e., the narcotics trade and organized crime). However, it would be a logistical nightmare for a large criminal organization to move large sums of money across the border in this way. Still others suggested that the type of jobs held by Mexicans in the United States coupled with U.S. stimulus checks explain why remittances have continued to grow. (BBVA points out that 60 percent of Mexican workers in the U.S. are eligible to have received a stimulus check.) But this explanation also seems insufficient, considering that, according to the U.S. Bureau of Labor Statistics, the unemployment rate among the Hispanic population in the U.S. is nearly 3 percentage points higher than it is for the general population.

While the exact reason for the uptick remains unknown – and it’s likely a combination of factors anyway – we do know for certain that remittances will remain a critical element of the Mexican economy as it faces a steep recession. And despite the figures showing growth thus far this year, their rise throughout the rest of the year is not guaranteed.

What We’re Reading: The Exceptional and the Unexceptional