On Jan. 16, the Chinese Ministry of Water Resources announced that Beijing invested more than 1 trillion yuan ($148 billion) on water resource management in 2022, a whopping 44 percent increase from the previous year. Elsewhere, Pakistan suggested that water resource management projects need to become a priority for the China-Pakistan Economic Corridor because by 2025 Pakistan is expected to be a water-scarce country. Weeks earlier, an Iranian official confirmed that 270 cities and towns were suffering from acute water shortage as water levels at dams dropped to critically low levels.

Factories in southwest China had to suspend their work last summer after a record-breaking drought caused some rivers in the country – including parts of the Yangtze – to dry up. Hydropower and shipping were also affected; Sichuan province was deemed to be in a “grave situation” because it generates more than 80 percent of its energy from hydropower.

Pakistan is in a similar situation. The Indus River is a source of more than 17 gigawatts of hydropower, and it provides water to the Indus basin irrigation system, which supports more than 90 percent of the country’s agricultural output. Poor water management, rapid population growth, and drought and floods have created a truly dire situation.

In Iran, a semi-arid climate and declining precipitation over the past decade have played their part in the crisis, but perennial inefficient water management since the 1990s is perhaps the larger problem. After the 1979 revolution, the new regime advanced a policy of national food self-sufficiency, which involved producing enough staple crops to meet the country’s own needs instead of relying on imports. To that end, agricultural production became reliant on groundwater extraction, and slow-filling aquifers have not been able to keep up with the growing number of water users and withdrawals.

These issues may not be new, but they are all getting worse. And the fact that these three countries are geographically interconnected has been a wake-up call for other nations around the world that have dealt with, or are soon to deal with, similar water shortages and their associated consequences.

Indeed, water is so fundamental to geopolitics that it is often overlooked. Water supplies play critical roles in sustaining life, agriculture and industry. The supply levels themselves can fluctuate dramatically for reasons outside of a government’s control. However, given the increasing threat of water shortages and the consequences arising from them, governments are increasingly more aggressive in taking what action they can to ensure supply.

Disputes over control of water resources historically end in violence. The historical dispute between Ethiopia and Egypt over water from the Nile River is probably the one that has garnered the most attention. Even today, the water supply in Donbas is carefully managed on both sides, and in Kherson, understanding the way water supplies to Crimea could be cut was key to understanding the fighting on the ground. More, the Russian attack on the Dnipro hydropower plant was meant to sever electricity to the region as part of the Russian strategy to down Ukraine’s critical infrastructure. In war, water is at once a weapon and a casualty. 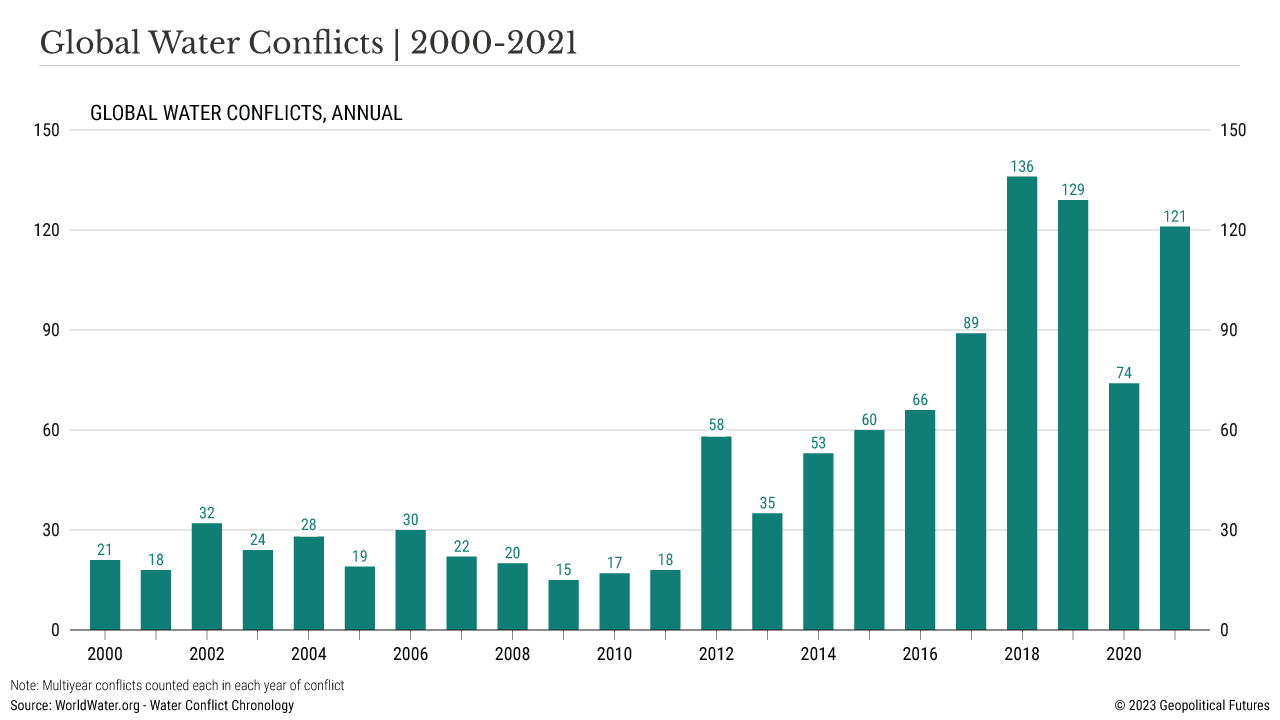 But water is only part of the equation. The droughts of 2022, followed by the warmest winter in years in the Northern Hemisphere, have many governments on edge this year as the downstream effects of water shortage take shape. The potential food crisis, initially the result of last year’s energy crisis, may only get worse. The impact will be felt the most in places like Africa and the Middle East, where water scarcity is a constant concern. Refugee flows from places like Iraq, Syria and Yemen may well increase. Food insecurity will likely grow in countries like Algeria, Morocco and Tunisia. And because it’s unclear how much food will be available for export from otherwise large producers such as Russia and Ukraine in 2023, countries with limited domestic production have even more reason for concern, especially as their citizens grow more restive.

But even for major powers like China, Pakistan and Iran, things will likely get worse before they get better. All three are already dealing with socio-economic distress. It’s unknown how much the COVID-19 pandemic hurt the Chinese economy, but it isn’t good, with reports painting a particularly bleak picture for youth unemployment. (That is to say nothing of the economic problems China faces independent of the pandemic.) Pakistan is seeing its worst socio-political crisis in years. Iran has been embroiled in high-profile protests for some time. Inflation is high in all three countries, as is economic unrest from class inequality. Adding water stress could make things even more explosive. 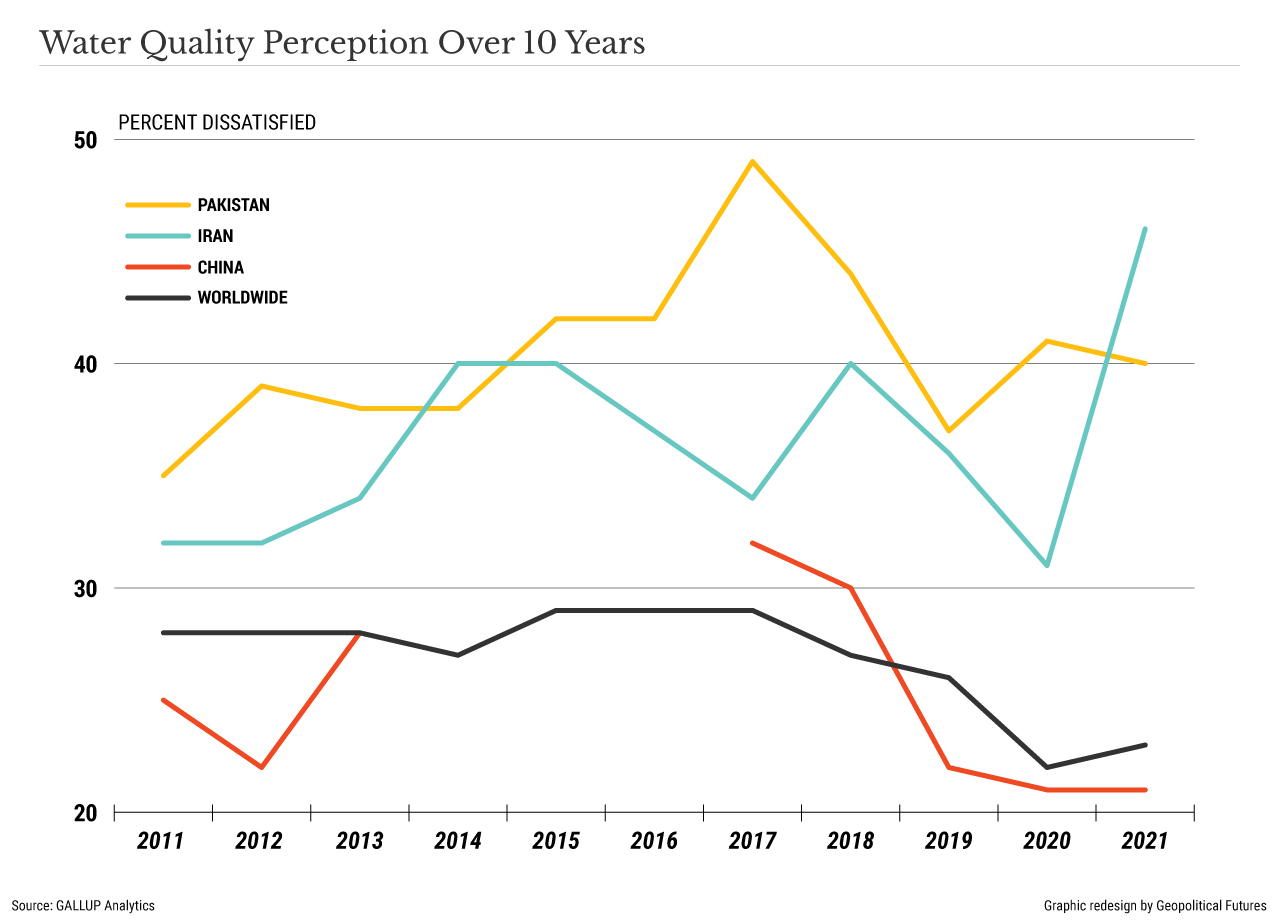 Further instability in any of the three major players will likely have a spillover effect in the Middle East and beyond. A troubled Pakistan and Iran at the same time will certainly make Turkey and Saudi Arabia nervous. And what happens in China – one of the world’s largest consumers of resources and one of its biggest economic engines – matters to the rest of the world. Factory shutdowns due to water shortages in post-pandemic China would trigger new supply chain shocks affecting both Europe and the U.S. Neither is decoupled enough from the Chinese powerhouse to ignore such shocks. 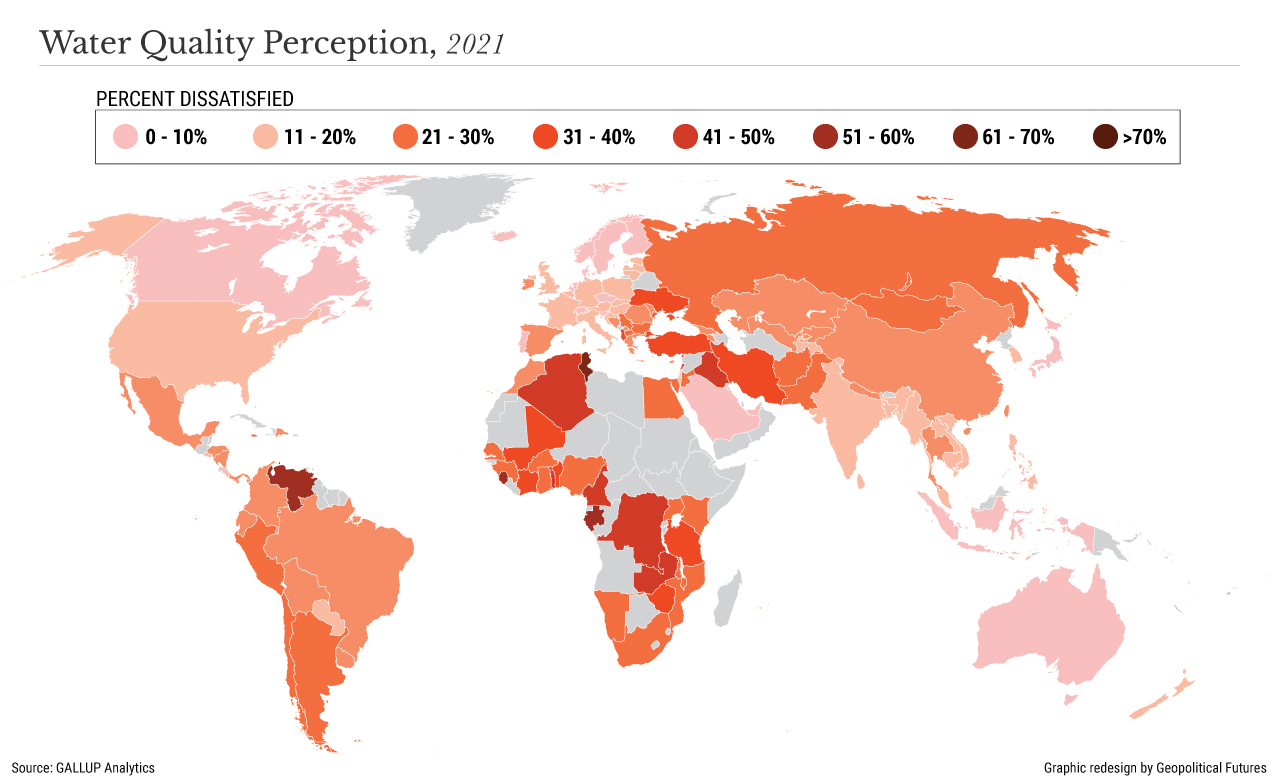 Both have their own water issues to deal with. Lower levels in the Rhine triggered alarms for European inland shipping last year; further reductions will likely hamper economic activity in Western Europe. Last year, water scarcity compelled the U.S. government to limit water releases in western states. If things get worse, U.S. policymakers will be forced to choose between water releases, electricity generation and industrial and food production on the one hand and water conservation on the other.

Water is finite, so it’s clear that concerns over its use and distribution will increase as reserves dwindle. Under higher pressure from citizens, governments will search for quick fixes. If a fix for one country comes at the expense of another, tensions will inevitably arise – perhaps violently. Each government will manage, or try to manage, the situation differently. In poorer countries, militias may continue to fight over water, while in wealthier nations, new policies over water usage and likely new technologies for keeping and improving water infrastructure will be debated. All in all, water stress highlights another socio-economic challenge that the world needs to tackle before it gets worse.