SprawlBall: A Visual Tour of the New Era of the NBA 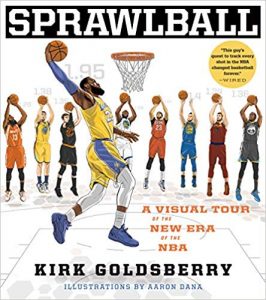 “Geography is destiny” isn’t how books about sports should begin, right? That kind of line is reserved for textbooks written by Dead White Men, the guys who studied the rise and fall of empires, those veritable stewards of bygone civilizations and knowers of international political economies. Were they still alive, they might say that to understand how a nation behaves, you need to start by looking at a map. An atlas alone won’t tell you everything you need to know, they’d argue – you’ll need to supplement your research with trade data, analyses on government spending, demographic breakdowns, blueprints of its political architecture and about a hundred other things – but the map is always where the investigation should start, and frequently where it should end.

And they’d be right! Geography doesn’t dictate how a nation acts so much as it establishes the parameters within which agents of that nation operate. Geography sets the rules. Some rules can be changed, others can be bent, broken or ignored, but one way or another, that they exist at all has a determinative effect on future behavior, sometimes in subtle and unforeseeable ways.

This is precisely why Kirk Goldsberry, in the absorbing and visually stunning “SprawlBall: A Visual Tour of the New Era of the NBA,” applies a cartographical ethos to the basketball court: Because maps may well be the best way to understand a game currently in flux. It’s also why he opens with a tip of the hat to Sun Tzu, the guy who observed two millennia ago how important terrain and space are to strategy.

The juxtaposition of ancient martial philosophy and modern data analysis may seem strange at first, and maybe even a little pretentious, but it works, and in any case, Goldsberry comes by it honestly. He grew up playing basketball recreationally. In college, he studied geography but eventually switched over to cartography, earning graduate degrees that married mapmaking to digital data visualization. He worked in academia for a spell, including a stint at Harvard, before he submitted a paper at the 2012 MIT Sloan Sports Analytics Conference that would put him … on the map. In it, he introduced a new way to depict NBA shooting patterns. It was a hit, and it was at least partly responsible for landing him a job at Grantland, lauded by many to be the standard-bearer of sports journalism in its time, and then at the San Antonio Spurs, generally considered to be among the NBA’s most respected franchises. He now writes for ESPN, crunches numbers for Team USA Basketball and teaches at the University of Texas.

Goldsberry’s central thesis in “SprawlBall” is straightforward. He argues that the introduction of the 3-point line in 1979 changed the game. (He argues further that aside from the forward pass in football, no other innovation has had such a dramatic effect in sports.) By drawing an arbitrary line behind which all shots are magically worth 50 percent more than shots made in front of it, it encouraged a new style of play, one that emphasized movement and space and switching and especially deep shooting more than ever before.

The transition started slowly but accelerated exponentially in recent years, as demonstrated by two of the game’s most prolific scorers. In the 1986-1987 NBA season, Michael Jordan averaged an astounding 37 points per game while averaging just under one 3-point attempt per game. In the 2018-2019 season, James Harden averaged an only slightly less astounding 36 points per game, but he did it while averaging about 13 3-point attempts per game.

Why the uptick? Because the numbers justify it. On average, a 3-point shot is worth 1.07 points per attempt, while a 2-point shot is worth just 0.8 points per attempt. Speed up the game, take a lot of triples, and you start to see the math pay off. In the 2017-18 season, the Houston Rockets, an early adopter of the spray and pray approach and uncoincidentally among the league’s most successful franchises of late, became the first team to take more than half of its total shots from beyond the arc.

But therein lies the problem: In basketball, shot selection is zero-sum; longer shots necessarily come at the expense of shorter ones. The premium placed on threes has therefore necessitated the types of personnel changes that have rendered many “traditional” players obsolete in today’s game.

Call it the Moneyball-ification of the NBA. Goldsberry’s book certainly owes a lot to Michael Lewis’, but “SprawlBall” is fundamentally an atlas – a book of maps with extended analyses to explain them (and handsome illustrations to boot). And though much of it reads like a longer version of data-driven columns basketball fans would be familiar with, Goldsberry homes in on key figures who embody or advance the transition long underway – people like Steph Curry, Kevin Love, Daryl Morey, Ryan Anderson and Steve Kerr (whose own backstory is fraught with geopolitical tragedy). Through them, Goldsberry personalizes a story most other authors are content to tell with numbers alone.

One of the things that drew me to geopolitics, and one of the things that continues to fascinate me, is how universal it is. In reading “SprawlBall,” a book about the political geography of basketball, I can’t help but note the parallels to international relations – how poorly conceived and lazily executed policies can have interminable effects, how haphazardly drawn boundaries can alter a nation’s behavior over time, and how rules and regulations, well-intended though they may be, can fall victim to the cold calculations of success. 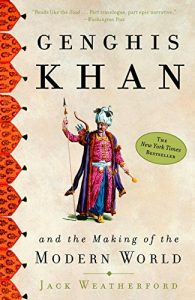 “Genghis Khan and the Making of the Modern World” by Jack Weatherford is focused on one of the most controversial but important figures in world history. A central figure in Mongolian chronicles and legends, Genghis Khan had an enormous impact on the country and the region. As an anthropologist who has studied Mongolian history for years and was one of the first Western scholars allowed into certain Mongolian historical sites, Weatherford used artifacts and references to historians to form the narrative of the story he presents in his book.

It’s divided into three sections, each of which is dedicated to a specific period. The first details the life of Genghis Khan from the 12th century to the beginning of the 13th, and the second covers the first half of the 13th century. Both sections are full of interesting facts about Genghis Khan and his heirs. The author also describes innovative fighting techniques used by Genghis Khan and the strategy he employed to take over large swathes of the continent.

But the book goes beyond describing the life and times of one of the greatest conquerors in the history of the world. Weatherford also delves into Mongolian history and its influence on the development of other regions, including Europe. In fact, the final chapter, titled “The Global Awakening,” covers the mid-13th century to the 20th century and focuses on the Mongol Empire’s expansion through Asia and parts of Europe. This seemed to me the most informative and fascinating part of the book.

The legacy of Genghis Khan isn’t always portrayed in a positive light, as he is often described as being cruel and barbaric. But this book reminds readers that the Mongol Empire did more than conquer territory. In later centuries, Mongolia pursued a policy of peace and actively participated in intercontinental trade, both on land and at sea. Genghis Khan and his heirs encouraged trade and spread culture and technology from the east to Russia and Europe. Indeed, the importance of the Mongol Empire can’t be understated, and this book sheds light on just how much it changed the course of human history.

What We’re Reading: The Generational Divide and the Caucasus’ Complicated History