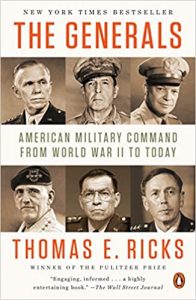 This study of the evolution of U.S. generals is revealing of the history of warfare, and contemporary problems in the U.S. Army. During the Civil War, generals were often selected for family connection rather than quality of leadership. Many were extremely young. They were suited to war as it had been waged, but war changed during the Civil War, from small units to massive formations, from focus on close combat to artillery and the accompanying logistics. The chivalric model of the war, which the Confederacy tended to honor, was lost, and generals like Grant and Sherman focused on complicated warfare designed to destroy the enemy force and country by whatever means.

During World War I, generals still tended to have social connections, and many of them were what were called Chateau Generals. Like Pershing and his staff, the generals remained to the rear, under the theory that warfare depended on terrain and artillery, with the infantry used for its bloody necessity. Generals rarely visited the battlefield themselves, and their understanding of the battle came from maps, knowledge of the capability of weapons, and enemy strategy and probable tactics. Orders ran from the top down; generals were usually just the conveyor belt.

World War II changed the game of generalship, and it was rewritten by George C. Marshall, the army’s chief of staff. He had three requirements for his generals. The first was that they had to be able to make decisions, and to make the right decisions. The speed of war no longer supported the conveyor belt. They had to be familiar with the terrain from personal experience, not from maps and reports. Generals needed to be close to the battle. Finally, they needed to be able to relieve incompetent subordinates and nurture and promote competent ones. The key capability was to relieve and reassign someone who had risen above their level of capability, but they also had to be warriors. Marshall found generals as different in personality as Eisenhower, Bradly and Patton, each of whom had the ability to make decisions, understand the war in detail and never put friendship before duty. They had to have the instinct for war and the ability to innovate on the fly.

After World War II, Marshall’s genius under a cold and unpleasant exterior was ignored. The new rage in the United States was the manager, and the Army reorganized itself in that spirit. The manager and the warrior are at root different people. The manager tries to create a system in which proper action can be recognized at all levels. Marshall’s generals were expected to lead by knowledge and instinct.

War is too dynamic to be managed by processes. Its essential core is the rapid elimination of incompetents in order to save lives and win battles. The management system that the Army adopted has many roots, according to Thomas Ricks, but the substance of a management mentality created the likes of Westmoreland and all the other generals who lost wars in an orderly manner, making sure that everyone was informed and motivated to follow the same pattern, successfully or not. For Ricks, Marshall had won the war with the men he identified and protected, including Eisenhower’s defense of Patton. For Marshall, winning was everything. In Vietnam and now Afghanistan, it is a lesson. Marshall wanted generals who could tell Churchill he was wrong or to bust a good friend for a security breach. He owed it to his soldiers. 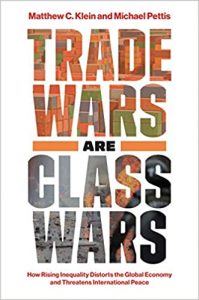 If you’ve read Michael Pettis’ 2013 book “The Great Rebalancing,” you’ll already be familiar with the main points of his new book, written with Matthew C. Klein, called “Trade Wars Are Class Wars.” To summarize, the Great Recession – and myriad other problems, from the eurozone crisis to secular stagnation to the rise of populism – was caused by a savings glut in China and Germany, which overproduced goods relative to domestic consumption, exported the excess production and then funneled their excess savings into the United States and southern Europe. In this telling, the crisis was not a result of reckless borrowing and profligacy in America or the so-called PIIGS (Portugal, Italy, Ireland, Greece and Spain). Rather, domestic economic imbalances in the surplus countries forced the deficit countries to borrow beyond their means. As Klein and Pettis put it: “As long as there are Americans who want to borrow—and in every country, there are always people who are willing to borrow under the appropriate conditions—the U.S. financial sector will find them and lower interest rates and lending standards until loan targets are met.”

“The Great Rebalancing” was largely about how this plays out between surplus and deficit nations, whereas “Trade Wars Are Class Wars” zooms in on China and Germany to explain why they run such large surpluses and how it comes at the expense of their workers. They also discuss America’s “exorbitant burden” as the issuer of the world’s reserve currency. Despite containing lots of graphs and unique data sets, the book is highly accessible for non-economists.

So what can be done about this? The U.S. government can take some steps to support domestic manufacturing and those left behind. But the durable solution, Klein and Pettis argue, lies in taking on elites in surplus countries – and ignoring the outcry from elites in the U.S. who benefit from the status quo. Were the deficit countries to cease accommodating the surplus states, the latter would be forced to suffer the consequences of their unequal policies, namely, a dramatic drop in demand for their exports and enormous job losses. Doing this would be enormously costly – politically, economically and diplomatically – for everyone involved, and I have no confidence that it will happen in an orderly fashion. But the alternative is not the status quo but a more chaotic rebalancing later. One way or another, balance is always restored.

The Road to Four Months That Changed the World