The Storm Before the Calm

The Storm Before the Calm: America’s Discord, the Coming Crisis of the 2020s, and the Triumph Beyond

The master geopolitical forecaster and New York Times bestselling author of The Next 100 Years focuses on the United States, predicting how the 2020s will bring dramatic upheaval and reshaping of American government, foreign policy, economics, and culture.

In his riveting new book, noted forecaster and bestselling author George Friedman turns to the future of the United States. Examining the clear cycles through which the United States has developed, upheaved, matured, and solidified, Friedman breaks down the coming years and decades in thrilling detail.

American history must be viewed in cycles—particularly, an eighty-year “institutional cycle” that has defined us (there are three such examples—the Revolutionary War/founding, the Civil War, and World War II), and a fifty-year “socio-economic cycle” that has seen the formation of the industrial classes, baby boomers, and the middle classes. These two major cycles are both converging on the late 2020s—a time in which many of these foundations will change. The United States will have to endure upheaval and possible conflict, but also, ultimately, increased strength, stability, and power in the world. 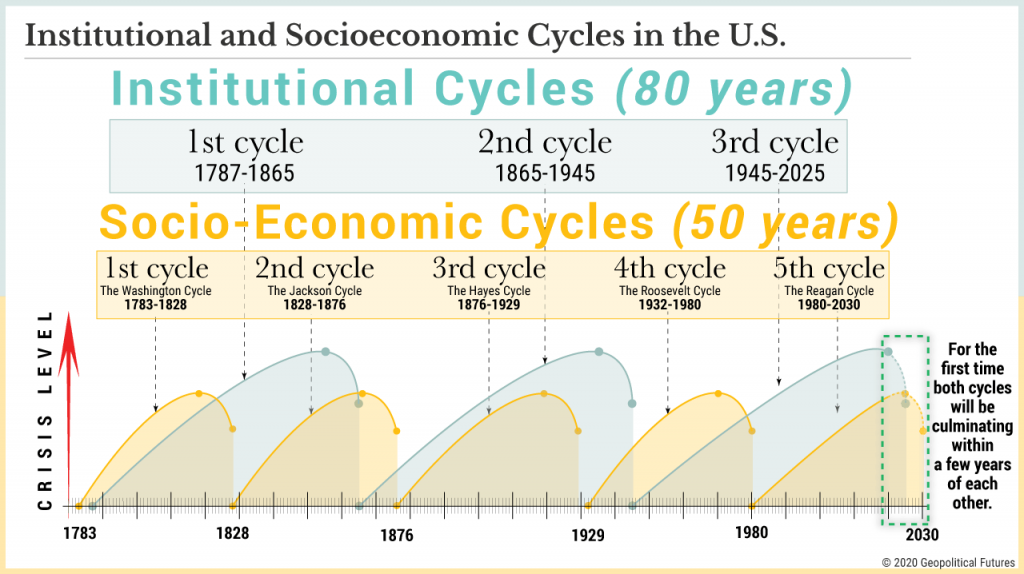 Friedman’s analysis is detailed and fascinating, and covers issues such as the size and scope of the federal government, the future of marriage and the social contract, shifts in corporate structures, and new cultural trends that will react to longer life expectancies. This new book is both provocative and entertaining.

“This book is of obvious general interest but is essential reading for anyone with a role in strategic planning. It combines clear, interesting prose with a thought provoking projection of upcoming challenges and ultimate outcomes.”
Douglas Duncan, Chief Economist, Fannie Mae.

“In The Storm Before the Calm, George applies his geopolitical forecasting model to the United States and tells a unique story of American history from our founding to today. The result is a useful dispassionate framework for understanding where we are now and where we are likely going as nation.”
Joe Daly, Senior Partner, GALLUP.

The U.S. is at a tipping point. Its federal government cannot operate efficiently and its military can’t untangle itself from lengthy warfare. Business prospects are low, industrial innovation has been stifled, the citizenry is divided and political discord is at the broiling point.

Is this it for the American Dream? Hardly, according to George Friedman.

In “Storm Before the Calm,” he acknowledges the nation is entering an unusually calamitous period of instability, but he argues the tension is not only normal, but essential. As an invented country that originally desired to balance individual liberty with national interest, the U.S. needs slivers of years to redefine, then reinvent itself, he says. Only by doing this can the nation meet its needs while staying true to its founders’ intentions.

As a geopolitical forecaster, Friedman is a believer in societal cycles, tiered toward the characteristics of the land and its people. In this nation’s case, he argues, there are two ongoing cycles: a roughly 80-year institutional cycle, which links the relationship of the government to its citizenry; and a 50-year socioeconomic cycle that defines the dynamics of the nation’s economy and society.

According to Friedman, the U.S. has already witnessed three institutional and five socioeconomic cycles. What makes the 2020s unique is that both cycles will occur nearly simultaneously. Friedman doesn’t mask the pain and toil the average American will endure, but like an insect undergoing metamorphosis, the nation will shed its old cycle-encrusted skin and emerge better prepared to deal with the challenges it faces.

Friedman uses an examination of the nation’s founding and all its cycles to show how we’ve reached this place. He presently sees a government bogged down by technocrats (nonideological, apolitical specialists dedicated to lone fields of expertise), big-tech innovation stagnated by the declining value of the microchip, capitalists sitting on too much cash and a struggling underclass being denied avenues to upward mobility.

He believes those issues, in varying degrees, will be addressed, perhaps rectified, in the coming 10–15 years. Friedman admits he can’t factor in some variables, such as climate change and artificial intelligence. And it’s worth noting this book was written before the nation was rocked by COVID-19 and the George Floyd killing.

Still, amid the rancorous din of Twitter, Tik-Tok and Trump, Friedman reaffirms to us our current state of rage has all been done before.
–Jeff Schulze, The Free Lance–Star

George Friedman’s book may portend our way out of crisis

There is a famous saying rendered in the form of a curse: “May you live in an interesting age.”

We certainly are living in such times, and Hawai‘i is also experiencing it as well.​

Given the myriad events in the last few years, most notably right now during this stay-at-home county and statewide order, it can be hard to see nothing but the turbulent storm we are riding through.​

However, George Friedman, geopolitical forecaster and author of the bestselling books such as “The Next 100 Years” and “The Next Decade,” takes the long view, which pierces through the uncertainty ahead.​

“The Storm Before the Calm: America’s Discord, the Coming Crisis of the 2020s, and the Triumph Beyond,” is an objective and impartial look at where we are now and what awaits us beyond these turbulent times. We can think of no better book to read than this right now, when the state of the country and our society is part of a worldwide existential crisis.​

Threaded throughout his book is the notion that America endures cyclical changes, both economic and ideological, and he does an amazing job of describing these changes throughout the course of the country’s history.

The 2020s are a unique focal point where these two cycles converge, he posits, creating the cultural environment we are in today. Yet, what lay beyond, and how he presents we get there, is fascinating, and potentially hopeful.​

While COVID-19 has shuttered libraries and all booksellers (like us) until further notice, you can explore “The Storm Before the Calm” either digitally or from an online outlet, including our bookstore’s website, which includes no-cost shipping to folks in Hawai‘i.​

Seems like a perfect time to read a book, especially one that might give us a glimpse into the future that awaits us.
–The Garden Island

“The vitriol of the Trump era masks crises in our economy and governing institutions that will deepen before resolving themselves, according to this probing and ultimately hopeful diagnosis of America’s discontents . . . Friedman offers a lucid, stimulating assessment of which way the wind is blowing.”
–Publishers Weekly

“[Friedman] offers a sharp analysis of American life, especially the roots of the knack for reinvention that allows the nation to start over after crises. Americans invented their country, he writes, and lacking shared history and culture, ‘invented themselves.’ Friedman also discusses the nation’s reluctance to accept its responsibilities as the ‘sole world power’ and the tensions between its technocratic and industrial working classes. A provocative, idea-filled burst of prognostication.”
–Kirkus

Who will win the acrimonious 2020 presidential election? Shockingly, it won’t actually matter that much, argues renowned geopolitical forecaster George Friedman. America, he contends, is governed less by leaders and legislation and more by cyclical forces that work deep within the nation’s unique structure.

In his intriguing new book, The Storm Before the Calm, the Austin-based New York Times best-selling author describes how “[t]he United States periodically reaches a point of crisis in which it appears to be at war with itself, yet after an extended period it reinvents itself, in a form both faithful to its founding and radically different from what it had been.”

Friedman, whose previous works include The Next 100 Years and The Next Decade, explains: “We tend to evaluate America based on day-to-day news stories and immediate trends and feelings, but the larger wheels of America are driven by two very orderly cycles—the institutional and the socioeconomic.”

As he describes them: “The institutional cycle controls the relationship between the federal government and the rest of American society, and it runs its course every eighty years. The socioeconomic cycle shifts about every fifty years and alters the dynamic of the American economy and society.”

Friedman shows how each cycle has been repeating within its approximate time frame since the days of George Washington and how storms of change have occurred during each shift from one cycle to the next. “The characteristics of a current cycle stop being effective, and the model begins to break down,” he writes. “A period of political tension emerges, ultimately forcing a change in the way things are done. New models emerge and solve the problems, and the country beings a new cycle which operates until that cycle runs into trouble.”

Friedman’s well-written book lays out convincing cases for how the institutional and socioeconomic cycles have played out repeatedly since America’s founding and how the two patterns will, for the first time, almost converge during this decade.

The first institutional cycle, he notes, began with the drafting of the Constitution and ended just after the Civil War. The second cycle ended at the conclusion of World War II. “The strains of the next transition are becoming obvious now,” he notes, “and will take place around 2025.” Meanwhile, the socioeconomic cycle went through its most recent periodic shift in about 1980. And, Friedman cautions, “we are now facing another period of social and economic instability that will conclude in the late 2020s.”

He makes clear, in well-structured detail, that no matter how we view the Trump administration or its 2020 challengers, the current institutional and socioeconomic cycles will remain much more in charge of our fate. We all “are simply passengers on the American roller coaster.”

Multiple troubles still lie ahead, until the “the next phase of American history begins in the early 2030s,” Friedman cautions. But he projects the storms once again will pass, and the nation “actually [will refuel] itself from the crises, re-forming itself with a remarkable agility” previously demonstrated in past cycles.

The ship of state then will sail on, steering itself toward its next reinvention.
– Lone Star Literary Life

George Friedman is an internationally recognized geopolitical forecaster and strategist on international affairs and the Founder and Chairman of Geopolitical Futures, an online publication that analyzes and predicts the international system.  Friedman is a New York Times bestselling author and his most popular book, The Next 100 Years (2009) is kept alive by the prescience of its geopolitical predictions as they unfold in many countries. Other of Friedman's best-selling books include Flashpoints: The Emerging Crisis in Europe, The Next Decade, America's Secret War, The Future of War and The Intelligence Edge. His books have been translated into over 20 languages.  Determined to discover those principles of logic that govern the world, George received his PhD in government from Cornell University, granting him access to some of the most brilliant thinkers in the field... in the US and across the globe.  George's unmatched analysis in geopolitics has led him to regularly brief military organizations and consult for Fortune 100 executives. He also founded the geopolitical intelligence consulting firm Stratfor in 1996 and left Stratfor in 2015 to start Geopolitical Futures. 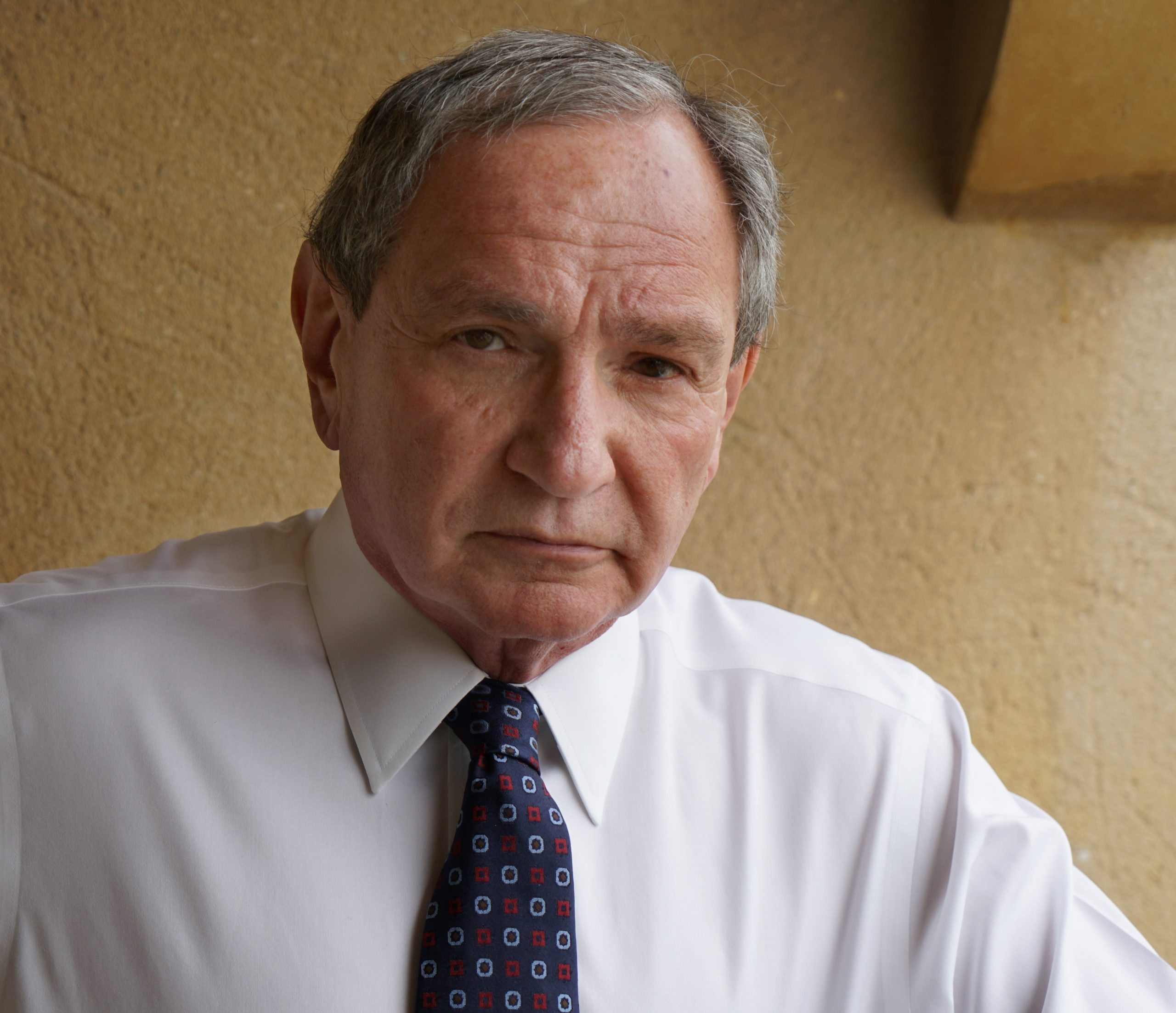