The United States is withdrawing air defense capabilities from several Arab countries, including Saudi Arabia, Iraq, Kuwait and Jordan, with most of the withdrawals being from Saudi Arabia. According to the report, the withdrawal will include Patriot missiles, some fighter aircraft and other unspecified weapons. Saudi Arabia was informed on June 2, with the withdrawals already beginning and to be completed this summer.

This is in keeping with the strategies of presidents Barack Obama and Donald Trump of reducing U.S. forces in the Middle East in order to minimize risk. Trump, however, increased the United States’ air defense capabilities in the region after Iranian drones struck a Saudi oil facility in 2019. The Biden administration’s withdrawal appears to be driven by the need to deploy these weapons in other regions. Thus, the question is where are these weapons going, and has something happened to make the transfer necessary? It is difficult to believe that the transfer is designed for near-term threats, since the pending public transfer of significant defensive weapon systems might force a potential enemy to speed up the initiation of war, to get first strikes in before the weapons are installed. The threat may not be immediate, in which case it could be almost anywhere.

The obvious destination would be in what can be called the Chinese theater. The U.S. has had concerns about the security of its manned aircraft in Guam, as well as its allies in the Japan-Singapore buffer. But the U.S. has long been conscious of a Chinese threat, and we would assume that sufficient capability has already been deployed, particularly because any action in such a conflict would have a massive air-missile component. Stripping the Arab world to beef up the Chinese theater would seem redundant. But it is possible that the defenses in place failed to satisfy needs, in which case one would assume adequate reserves exist in the United States to forward deploy.

Another possibility is a deployment against the Russian theater. Russia has been exerting pressure at multiple points along its border such as Belarus and the Caucasus. The U.S. has interests in both areas. One interesting but unlikely rumor we have reported is that Israel is planning to deploy an Iron Dome air defense battery in eastern Ukraine. The rumor is unlikely because Israel needs non-hostile relations with Russia, and because Ukraine is in no position to pay for it. The Iron Dome is far more elaborate than the weapons mentioned in the U.S. shift. Moreover, Ukraine is much larger than Israel, and scaling up the Iron Dome is not easy. However, given Russian actions, the United States has an interest in increasing air defenses in several countries, such as Poland, Romania, Georgia and most likely Ukraine.

In other words, the stories about air defenses coming to Ukraine might be true – the systems just might not be coming from Israel. The U.S. has followed a strategy of not arming Ukraine extensively in exchange for Russia not expanding its tacit control beyond eastern Ukraine. Given Russian military deployments near Ukraine, the U.S. might regard this understanding as obsolete, and providing a significant air defense system to Ukraine could be both a warning and a deterrent to Russia. The summit between Washington and Moscow was apparently less than productive, and it might be logical to move non-offensive weapons into a region the Russians may consider a viable target. 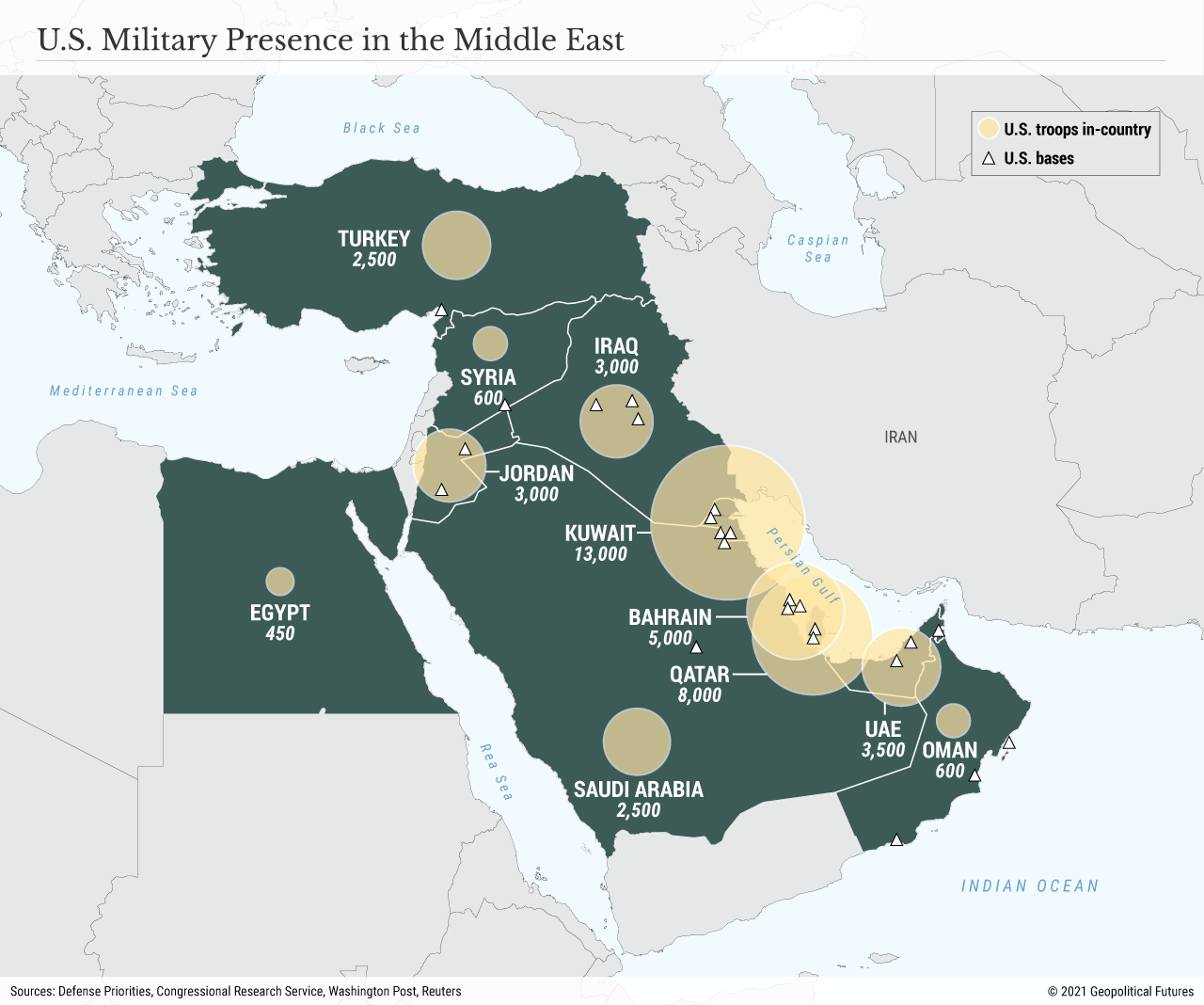 I have focused on the redeployment. But the withdrawal may have little to do with a redeployment. After all, the U.S. must have a significant reserve of weapons to deploy without withdrawing them from Arab countries. But if we turn it around and consider why the U.S. might be reducing the ability of these countries to defend themselves, it is necessary to consider Iran. The U.S. is in discussion with Iran and says it wants to resurrect the prior nuclear agreement. Iran’s primary enemy in practical terms is the Sunni Arab countries to its west. Iran fought a brutal eight-year war with Iraq in the 1980s that was started and, in practical terms, won by Iraq. Iran’s near-obsession with Iraq goes back to this war and the fear that if a united and powerful Iraq reemerged, it might face this enemy again, supported now by other Arab countries.

Imagining Iran’s position, Iran wants nuclear weapons to deter Iraq or another Arab country from launching a repeat of the war in the 1980s. It will be claiming in these meetings with the U.S. that it needs nuclear weapons to deter Arab states that the U.S. armed, particularly with air defenses, making it impossible for Iran to deter them. In other words, the Iranians’ position for the Islamic public may be that they intend to attack Israel, where the real point is to prevent another war. Following this admittedly twisted logic, they might be arguing that without a non-nuclear option to deter the Arabs, a treaty barring nuclear weapons leaves them wide open.

If this is the argument that is being made (and I think it is a good one), then the U.S. must minimize Arab air defenses to set the argument for Iran to commit to a nuclear treaty with significant inspections and teeth. So the other possibility, also timed to align with the Iran nuclear talks, is that this is a down payment for a treaty that is ironclad. And the U.S. might calculate that Israeli capabilities in this area may substitute. But then Iran also would know that.

There is no obvious explanation for this decision. It is both sudden and sweeping. It does not make defense against Iran impossible but more difficult. More important, it raises questions in the Arab world about U.S. commitment. When something is not obvious beyond being clearly important, we come to an interesting point. Normally such moves are slow, limited and designed to calm allies. This one is none of those. Therefore, something important is going on – unless it is simply a clumsy move, which does not reduce its impact. The idea that the U.S. had to strip air defenses in the Middle East because of a lack of reserves for use elsewhere doesn’t fly.

We need to see if these weapons go someplace other than a military base in the United States. If not, the only thing I can think of is Iran.

The Geopolitical Logic of the US-China Trade War