The U.S. is accelerating its fight against the Islamic State and radical Islamism. In his first interview as secretary of defense, James Mattis outlined the United States’ strategy. Mattis’ words carry weight because he is one of the few subordinates U.S. President Donald Trump seems to trust implicitly and to whom Trump has delegated significant responsibility. In the interview, Mattis said the war of attrition – pushing enemies out of their locations rather than destroying them completely – failed to produce the desired outcome. The U.S. will now fight a war of annihilation and humiliation against the enemy, which is not just IS but radical Islamism in general. Mattis expects the war to be a long fight, but he also expects to win.

A Change in Tactics

Mattis pointed to the battles for Mosul and Tal Afar as models for how these tactics will be implemented in other places. In both cases, forces on the ground, some with U.S. help, have surrounded IS targets to try to prevent Islamic State militants from retreating and foreign fighters from leaving the battlefield to return home. The forces then advance and clear these cities block by block, a hard task that takes time. This is what Mattis described as annihilation. The Islamic State’s greatest strength on the battlefield has been its ability to retreat and regroup, and the goal of annihilation is to destroy that strength. But this strategy comes with a high price. Iraq sent its best trained and equipped fighters into Mosul first, and casualty rates were reportedly around 50 percent for some units. The battle is about to enter its eighth month. 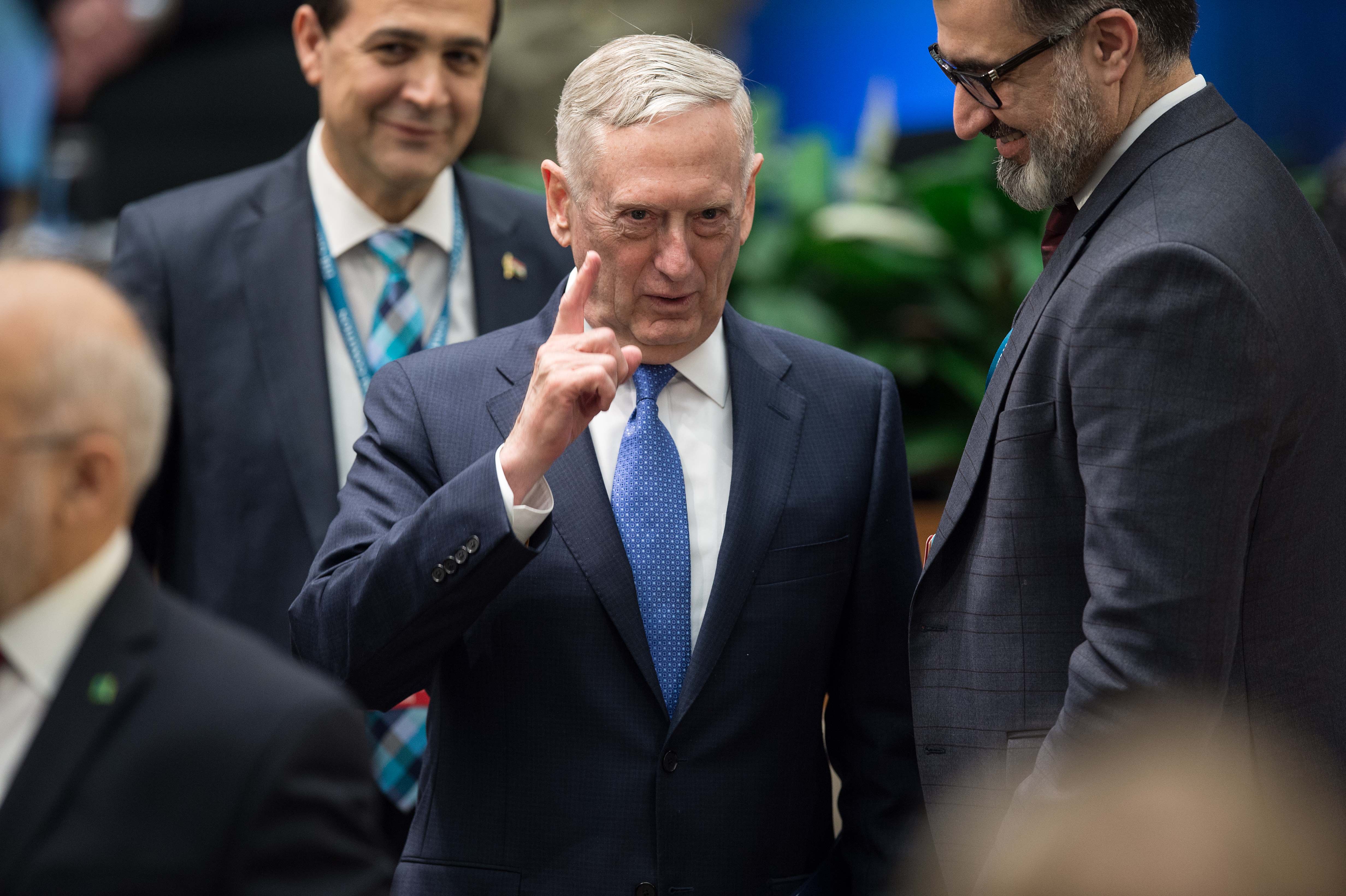 U.S. Defense Secretary James Mattis arrives at a meeting of the coalition to defeat the Islamic State at the State Department in Washington, D.C., on March 22, 2017. NICHOLAS KAMM/AFP/Getty Images

According to Mattis, this will be the blueprint for destroying the Islamic State’s caliphate, and the table is being set to apply this model on the de facto IS capital of Raqqa. Mattis is optimistic that IS will lose this fight, but even if this happens, the challenge will then be to prevent another group like IS from emerging.

This is where the humiliation tactics come in. In his interview, Mattis pointed out that the fight against the Islamic State is not just a military conflict. It is “a fight about ideas.” Mattis said the Islamic State’s recruiting and fundraising capabilities must be destroyed. The way to do this is to degrade the IS “message of hatred and violence” and any nation that would support it.

This is easier said than done. At multiple points in the interview, Mattis emphasized that the U.S. does everything possible to avoid civilian casualties, which he said differentiates the U.S. from its adversaries. On the simplest level this is true. The U.S. does not target civilians; the Islamic State does. But reality is more complicated. People who have lost loved ones in an accidental U.S. airstrike take no solace in the fact that the U.S. tries to avoid civilian deaths. And the fact that, according to Mattis, IS booby-trapped a building that caused a massive explosion when it was hit by a U.S. airstrike, reportedly killing over 200 civilians in Mosul, will not bring back the dead or convince a young Arab man who watched it happen that the U.S. has noble intentions. The road to hell is paved with them.

The Islamic State is no stranger to using humiliation as a tactic. When former U.S. President Barack Obama decided to send troops to Iraq to fight the Islamic State in 2014, an IS spokesman begged the U.S. to send its soldiers into the region so that IS could “humiliate them everywhere.” IS has been trying to humiliate the United States and the governments in the Middle East since its beginning. That is its grand strategy, and it was al-Qaida’s grand strategy under Osama bin Laden too. When Mattis talks about humiliating IS in the same breath that he talks about the U.S. avoiding civilian casualties, he is justifying the battle against these forces to a U.S. audience. Very few in Syria and Iraq pay attention to what U.S. officials have to say, and if they do, their own personal experiences would probably make such a claim unconvincing. IS believes in the righteousness of its cause as much as Mattis believes in the righteousness of his, and those who follow IS won’t stop because the U.S. says their message is immoral.

Perhaps all enemies try to humiliate each other in war, but there is something different about this kind of chest beating. Even when the fighting in World War II was at its worst, Franklin Roosevelt and Winston Churchill huddled together to dream up a post-war plan that would avoid making the same mistakes that were made in Versailles, when vengeance against Germany was prioritized over a peaceful resolution. Through their efforts, Roosevelt and Churchill created the backbone of an alliance structure that won the Cold War. After World War II, the U.S. rebuilt Europe – including its former adversary Germany – with the Marshall Plan. It also helped rebuild Japan, which became one of the world’s dominant economic powers. There was a belief that both sides would have to live with each other at the war’s end.

The U.S. could do this because defeating Germany and Japan meant defeating fascism. But defeating IS will not mean defeating radical Islamism. It will only mean moving on to the next group. In discussing the war against IS, Mattis also mentioned Hezbollah in Lebanon and al-Qaida, which has branches in both Syria and Yemen. If this is to be a war of annihilation, it will not end with the destruction of the Islamic State. It will need to be fought against Shiite and Sunni Islamist groups alike, which makes the challenge much greater. Mattis understands this. The U.S. has signed up for a long fight, he said in the interview, and it will commit its soldiers and resources to an “era of frequent skirmishing.”

Mattis also recognizes that it must be done “by, with and through” other nations. But this raises a different question: Which nations will cooperate with the U.S.? Mattis castigated the Iranian government as a source of chaos and violence throughout the region. That same government is funding and equipping the Shiite militias that have surrounded Tal Afar, one of the two cities where the new annihilation tactics are on full display. Another group Mattis singled out, Hezbollah, is also backed by Iran and has played a key role in propping up the Assad regime. Without this support, Bashar Assad might have fallen, opening wider swaths of territory for IS to conquer in 2014 and 2015. Saudi Arabia encouraged the rise of IS and other radical Islamist groups to fight back against the spread of Iranian power in the region. The reason the U.S. is mired in the Middle East in the first place is that regional powers have proved incapable of containing radical Islamism. The U.S. can annihilate all the Islamist groups it wants, but weak states and the conditions that led to radical Islamism will still be there.

For the U.S., the biggest challenge in the Middle East is that there is no clear sense of what victory looks like and no actors on the ground who share U.S. interests and are strong enough to help realize them. Mattis has now defined victory as emerging from the annihilation and humiliation of IS and many other groups like it. He has told the American people to prepare for a protracted conflict that will stretch from Europe to Asia. The problem with this is that annihilation is the same thing as humiliation, and the U.S. has neither a plan nor the power to shape what comes after the humiliation is over.

The U.S. has won many skirmishes, and it appears that it will win many more. The deeper question is whether peace can follow. The U.S. can only hope that the enemy’s ideas will die with its fighters. Ideas, however, are remarkably resilient in the face of death and humiliation. Radical Islamism was born of death and humiliation, and giving it more fuel will not stop its development. Mattis likely knows this and knows that the best the U.S. can do is contain it and rely as much on regional partners as possible to help in this fight. He can’t say that publicly because he needs to convince the country of the importance of a fight that is already in its 16th year, but this is the reality.

The UK and Argentina’s Perennial Squabble