One of the more striking things about the United States is the sense that it is in decline. Donald Trump’s main theme is that he would make America great again and that it has been in severe decline over the last decades. It was an effective campaign theme because it touched on a deep American dread. In Europe you will find a different sensibility, which is that while Europe has problems, they are nothing compared to the problems in the past – the Soviet threat, Nazi Germany, the mass slaughter of World War I. Europeans look at their past and are grateful to be living when they are. Many Americans feel a sense of a lost greatness and a looming catastrophe.

This sensibility is not new. During the 1970s, there was a deep and oft stated sense that America was in decline. At the end of the Vietnam War the enemy’s flag flew over a capital we had been defending. During the same time, there was a massive social and cultural divide. The culture of the lower-middle class and that of the graduates of the best universities were in sharp contrast. On the whole, it was the lower middle class that fought the war and supported it. The universities were the center of antiwar sentiment and contempt for those who supported the war. The contempt was mutual. The economic situation was catastrophic for many. Unemployment and inflation were both around 10 percent for a good deal of the decade. Interest rates were in the high teens, and buying a house was out of reach for many. At the end of the decade came the Iranian Revolution, with Iranians taking American diplomats hostage and the United States helpless to protect them. The disaster at Desert One followed – a task force sent to rescue the hostages collapsed, with planes destroyed and men dying before the rescue attempt began.

The sense of decline was rampant. It could be seen in crime and decay in the cities, the surge in Japanese exports to the United States, and the sense that the Baby Boomer generation, unable to settle into family or career, was destroying the fabric of society. The feeling was that the Japanese were surging ahead of the United States economically, the Soviets were surging ahead militarily and we were held in contempt by the world.

That was some 40 years ago and clearly the sensibility was wrong. What followed was the Japanese economic crisis, the collapse of the Soviet Union, recovery of the hostages from Iran and the United States emerging as the only global power. Interest rates plunged, as did inflation, and we came into a period of intense innovation and economic growth.

Having passed through the 1970s, as we did, it would seem reasonable that it would serve as a benchmark. A lost war, an extended economic crisis and social stress had not led to catastrophe. Yet, there are few lessons taken from the 1970s to provide some perspective. Similar circumstances are expected to yield the same dreaded disaster.

The sense of dread is more than a response to a particular time. It is also not that Americans lack the ability to use history to frame our concerns – although that may be the case. It has deeper roots, particularly in the 20th century. Two events, about 12 years apart, have left a permanent scar on the American psyche. One was the collapse of the stock markets in October 1929 and the following depression. The other was the attack on Pearl Harbor on Dec. 7, 1941 and the following war. 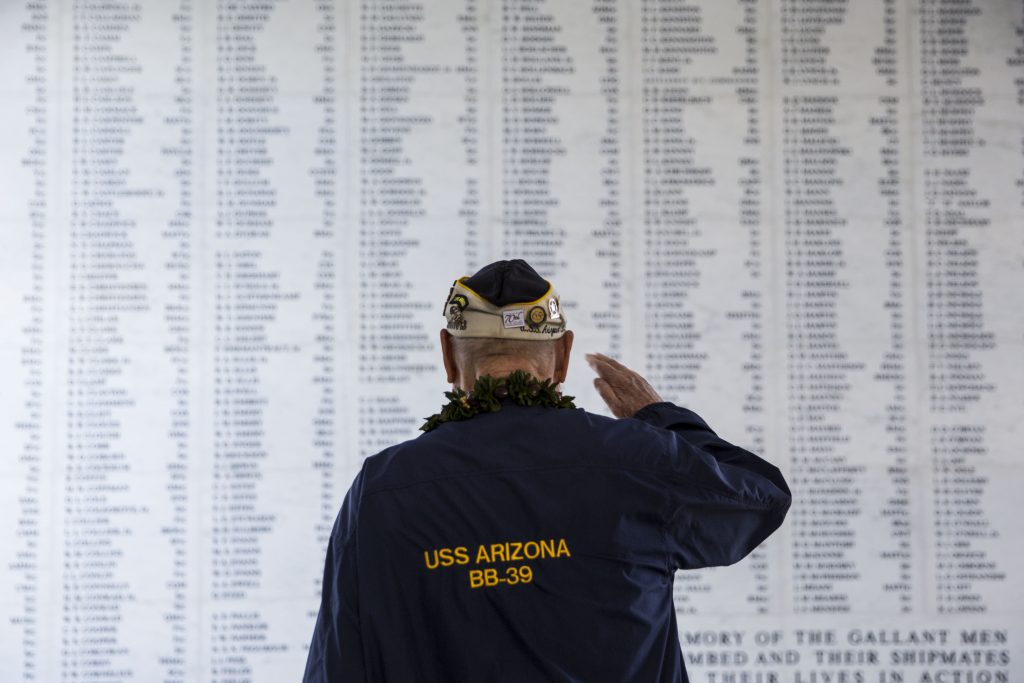 U.S.S. Arizona survivor Louis Conter salutes the remembrance wall of the U.S.S. Arizona during a memorial service for the 73rd anniversary of the attack on the U.S. naval base at Pearl Harbor on Dec. 07, 2014. Photo by Kent Nishimura/Getty Images

There was a common link between the two. Neither was expected by the public. Both were a shock that transformed everyday life for the worse. An argument can be made that both should have been expected. But they weren’t. These two events engraved a single principle on the American soul: that lurking beneath the surface of peace and prosperity are forces that break through and destroy both. In the more extreme formulation, both 1929 and 1941 were known to the elite, who not only protected themselves from the consequences, but also profited from them.

The 1920s were a time of prosperity in the United States (outside of the regions that experienced the Dust Bowl). As with all times of prosperity, the seeds of its own destruction were there from the beginning; people began to believe that it was the new, permanent normal. 1929 stunned people because it was unexpected, but it was the brutal grinding of the Great Depression that scarred the American soul. It created a national memory of hardship emerging without warning. At least some of us approach the best of times with a bitter certainty that hidden behind the false screen of prosperity, disaster is lurking, whether rooted in impersonal economic forces or the hidden hand of the powerful.

Pearl Harbor drove home to Americans that an enemy might strike the United States at any time, without being detected, and decimate the country. Most Americans suspected that the United States would enter World War II at some point, but they believed that it would be at the time and place of our choosing. The idea that the Japanese, whom many Americans held in contempt, could strike without warning and destroy the Pacific Fleet changed the world. The change was not simply that the U.S. was at war, it was deeper. It was the sense that war would come without warning and perhaps destroy us.

These two events changed the American sense of the world. It is overstated to say that before these events, the United States was innocent and carefree. The 600,000 dead in the Civil War would prove otherwise. But the Civil War did not strike out of nowhere, nor did the previous economic crises last for a decade. Combining the surprise at the events with how long and deeply they cut into the United States, a new sensibility was born. It was a sensibility of deep suspicion, not so much of people (although a fear of conspiracy was implanted), but simply of the fragility of American life and power.

The fear of the hidden disaster lurking to destroy us is not necessarily delusional. I happen to think that the 1970s provide a framework to think about our current decade and discount the worst fears we have. But there are reasonable fears and fears that will turn out to be reasonable regardless of my view. These fears serve as an engine for intensifying emotions and going to extremes.

Take two examples from opposite sides of the political spectrum. The concern that massive immigration from Mexico will transform American society and cause crime and disorder is not an unreasonable fear. Most immigrant movements to the United States resulted in some criminal activities and social instability. That is in the nature of immigration. However, when you attach the underlying engine of dread to an argument that may be wrong in this case, but isn’t absurd, you reshape the argument to a level of fear that means anyone who disagrees is a fool or a monster.

There is the concern that human activity is changing the climate and that that change poses a threat to humanity. The argument is not irrational, as we have seen increased temperatures that might well cause serious harm. When the argument on global warming is linked to the culture of dread, then the argument becomes a certainty and the only outcome is catastrophe. And those who take issue with it are fools or monsters. If things are as bad as those who want to stop Mexican immigration or those alarmed by climate change claim, then anyone who rejects the argument is like someone who refuses to see that the house is on fire.

Pearl Harbor defined the Cold War. If an attack can come at any time, then the United States must be ready for war 24/7. We drilled out a mountain in Colorado Springs to house the North American Air Defense Command. We had B-52s constantly airborne, submarines on constant patrol and crews in missile silos standing by ready to fire. I am not sure there was another course, but I do know that having raised the possibility of another course would have encountered rage.

When people write to me talking about the trillions of dollars of debt that will crush the American economy, they do so out of fear of the lurking force that will destroy everything. If you say, “It’s a problem, but we can probably manage it,” you might be called a fool or perhaps part of a conspiracy to destroy the economy.

Mexican immigration, climate change, mutual assured destruction and the national debt are all topics worth serious discussion among serious people, each holding open the possibility that the other is right. But when it is declared that the debate is over, that means that there can be no debate and no changing of minds. If it is a matter of the apocalypse, that is a reasonable thing to say. But if everything is apocalyptic, then no conversation on anything is possible.

In retrospect, we were all fools not to expect the Great Depression or Pearl Harbor. If we missed those, then what else are we missing? Someone will be happy to show you what else you are missing and with utter sincerity, he will try to convince you that you are not two reasonable people disagreeing, but that he is trying to save the country, and you are trying to destroy it.

We wonder at the growing incivility of American culture. Going back to the 1960s and 1970s, I remember the chant “hey, hey, LBJ, how many kids did you kill today?” Even in this election, I have heard nothing that uncivil. Nor have I heard that someone has a list of 100 communists in the State Department. Nor have I seen the dead of Antietam. So no, I don’t believe this is the most uncivil time in America. Not even close. But given the deep anxiety bequeathed us by 1929 and Pearl Harbor, we can see the fear of unexpected disaster can fuel spectacular incivility.

A belief has emerged in America that we are surrounded by hidden dangers that will strike when we least expect it and with a terrible fury. We are enraged when others don’t see it, for the same reason someone being ignored when he says there is a fire will be justly enraged. But everything is not on fire. Our time is no worse than the 1970s and that time was not nearly as bad as the 1930s. But then we think of the Depression and Pearl Harbor and we wonder if we are being lulled into a false sense of security. We are not uncivil. We are afraid. Our fears have serious origins. But reality does not always lead to the apocalypse.

Putin, Khrushchev and the Lessons of the Cuban Missile Crisis