Russia is not a trustful country – for good reason. Germany invaded it twice in the 20th century, France invaded it once in the 19th century, and Sweden once in the 18th century. These were not the nibbling incursions that Europe was used to, but deep penetrations meant to capture the Russian heartland and permanently subordinate it. Each century saw an assault on Russia that threatened its existence. It’s hard to forget something like that, and it’s hard for Russia not to be suspicious of moves on its periphery. There is nothing in Russian history to cause its leaders to think otherwise.

This attitude makes Russia a threat to its neighbors. The West saw the collapse of the Soviet Union as Russia simply giving independence to foreign countries. The Russians, stunned by what had happened, were prepared to view it this way as well. Moscow assumed the best from the West. It assumed that the newly independent countries would be neutral and would therefore not be a threat to Russia. The dynamics of history are not so orderly, and over time the Ukrainian government and Russia drifted closer. This threatened to undermine the Western vision of the post-Soviet world – as well as the expectation of many Ukrainians.

Just 24 years after the collapse of the Soviet Union, a revolution in Ukraine toppled the country’s pro-Russian government. From the Western (and particularly the American) standpoint, Ukraine was an independent nation – its affairs had nothing to do with Russia. Russia had a corrupt and repressive regime, and as part of the American moral project, the U.S. would support those who rose up against that regime and claimed their democratic rights. Russia saw things differently. From its perspective, the overthrown government was the legally elected government of Ukraine, and the United States (and others) had engineered a coup in order to impose a pro-Western government. In so doing, the United States capitalized on the collapse of the Soviet Union to take control of Ukraine. For scale, Poltava, Ukraine, where the Russians halted the Swedish advance in the 18th century, was only 500 miles (800 kilometers) from Moscow. The actual distance from the Ukrainian border to Moscow was substantially less than this. 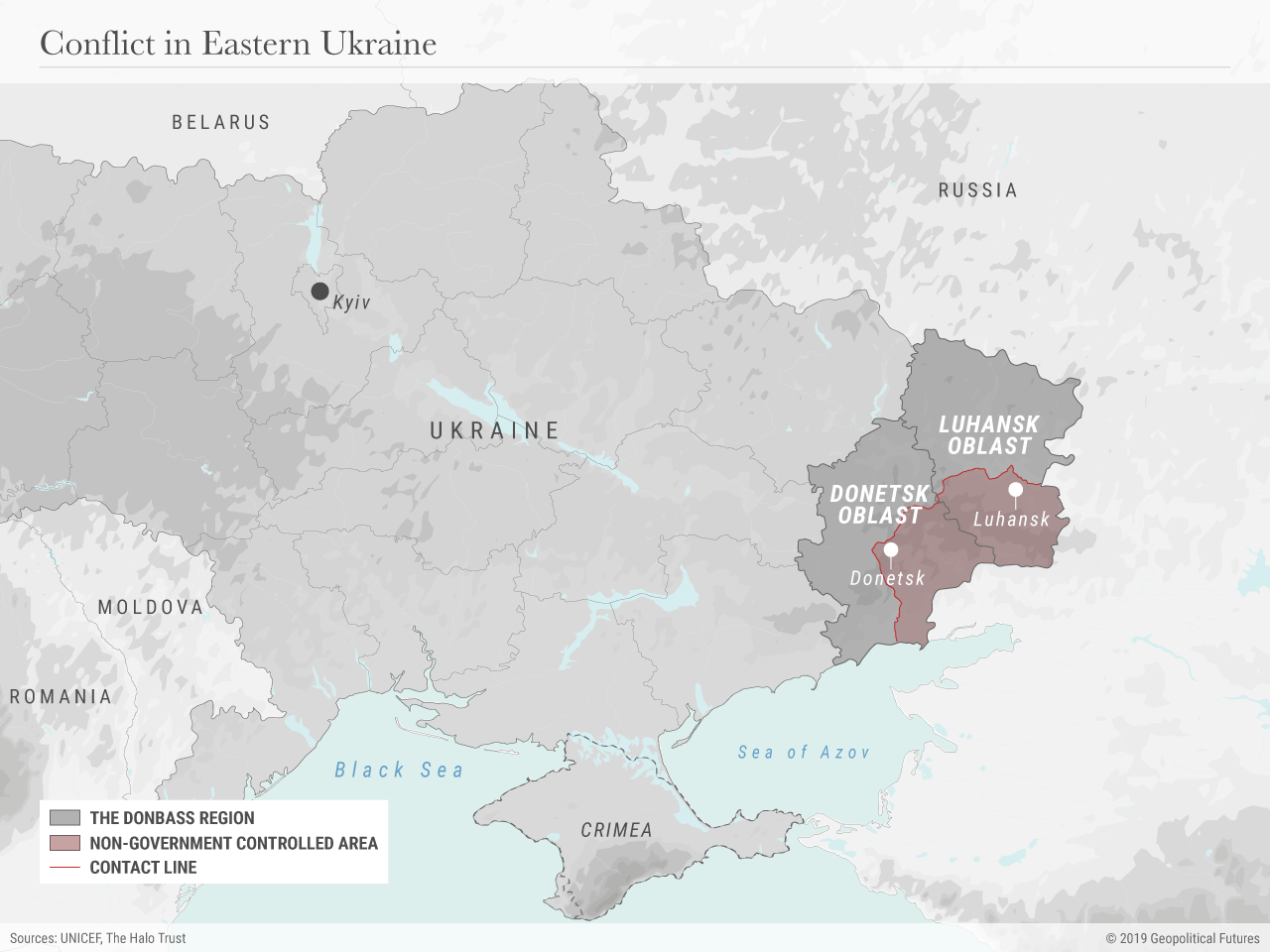 Whatever the Americans thought they were doing, the Russians saw this as violating Russia’s right to national security, using the pretense of encouraging democracy to threaten Russia. From the American point of view, Ukraine had the right to national self-determination. From the Russian point of view, it did not have the right to pose an existential threat to Russia. From a geopolitical point of view, the American intent didn’t matter. Intentions change, and a pro-American Ukraine was merely a new chapter in a long story of Russian insecurity. Russia had survived previous invasions by putting distance between an invader and Moscow. All of the previous centuries’ invasions failed because invaders had to traverse so much territory that a summer invasion would end in the Russian winter. With Ukraine an American “puppet,” that distance is dramatically reduced, the buffer zone dissolved. What had guarded Russia for centuries no longer guarded it. 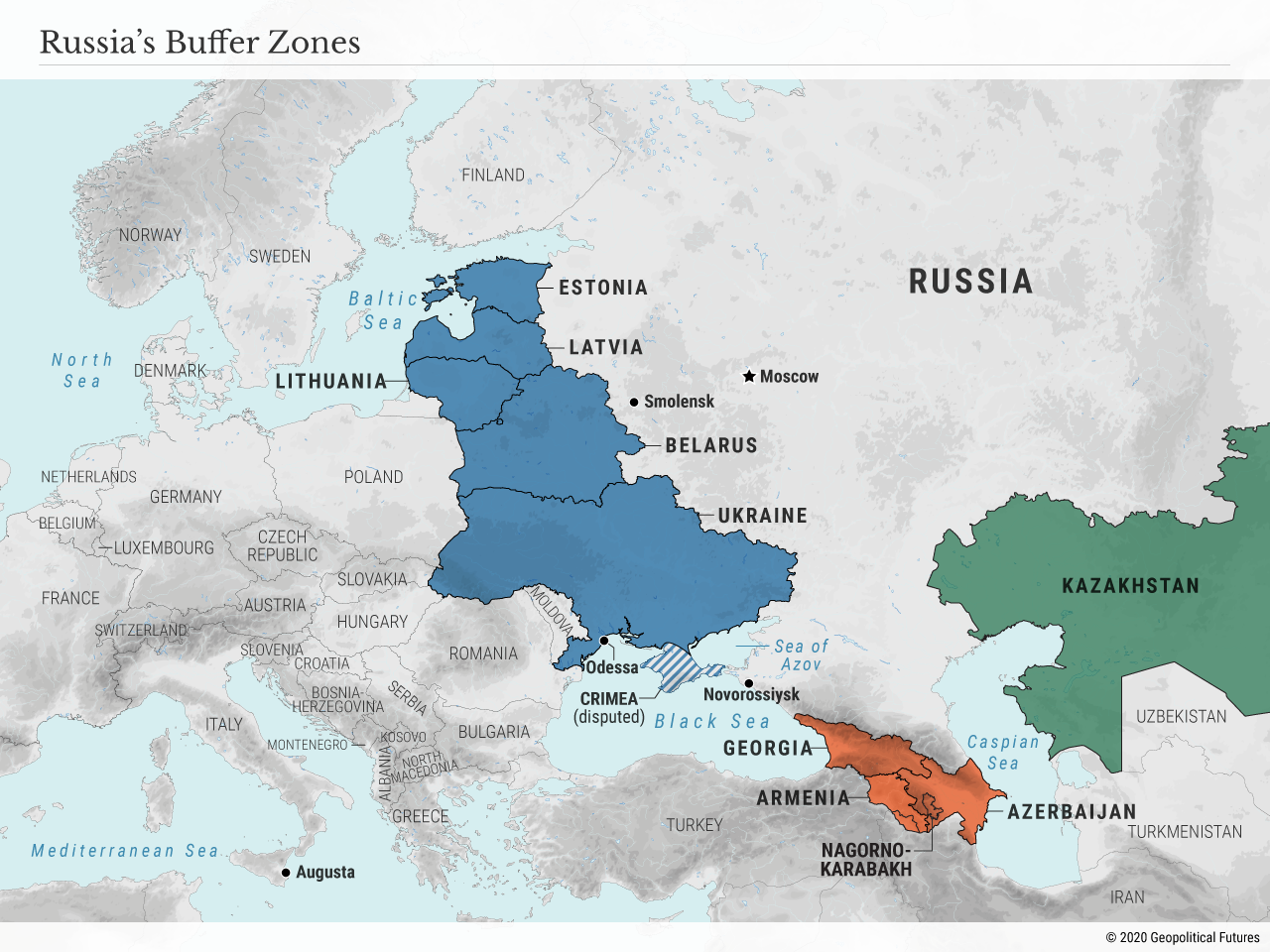 For Russia, this was the tipping point of the post-Soviet era. Ukraine was a critical element of Russia’s defense, but it wasn’t the only element. The main line of attack into Russia is the North European Plain, which stretches from France almost to Moscow. The Soviet Union’s western frontier was Belarus and was anchored on its border with Poland.

A second, more difficult line of attack into Russia is through the Caucasus, which separate Russia from Turkey, Iran and their allies. The Soviets controlled the massive North Caucasus mountains, including Chechnya and Dagestan. Though they formed a solid barrier against the south, they were populated and thus potentially destabilized by Islamist militants. The South Caucasus (Azerbaijan, Georgia and Armenia), formerly part of the Soviet Union, is also an important buffer.

A third line of attack lay in Central Asia. The countries of the region pose no threat to Russia themselves, but the withdrawal of the U.S. from Afghanistan has muddied the waters. There is a real threat of spillover violence from Islamists, and the U.S. continues to seek air bases in the region to support limited operations in Afghanistan. For Russia, Central Asia is thus important to secure.

To the east, there is the border with China. Russia shares an interest with China in blocking the United States, but there is a deep historic distrust between the two countries. The Russians had previously invaded China and Manchuria. The Soviets considered bombing Lop Nur, China’s nuclear weapon center, and approached the United States in collaborating on the operation. There were serious border conflicts between China and the Soviet Union in the 1960s, including a major battle along the Ussuri River. Mao was hostile to the Soviet Union. The entente between the United States and China in the 1970s and 1980s was directed against Russia. Given this history, The Chinese-Russian border is a place of vulnerability.

In other words, Russia is surrounded by vulnerabilities. So it has developed a soft approach to deal with them. It does not send in tanks; it uses political and economic problems to increase its influence. Thus is the case in Belarus, where the instability under President Alexander Lukashenko allows Russia to increase its power and destabilize the border with Poland. In Central Asia, it uses economic relations and the tension between Central Asian states to increase its influence. In the South Caucasus, it has inserted peacekeepers to maintain a truce between Azerbaijan and Armenia, giving it various avenues for leverage. It maintains good relations with China of course, but both remain wary of the other.

The North European Plain, the Caucasus, Central Asia and the Chinese border are all vital. But the central issue for Russia is Ukraine. Ukraine is where the United States has, from the Russian point of view, sunk its claws. Russia can manage Belarus, but it cannot exert soft power in Ukraine because of the potential for American intervention. There are rumors of a Russian invasion in the coming weeks, but real invasions are not announced. On the other hand, invasions you do not want to launch (because you could lose) should be announced. It becomes a psychological weapon to try to force a settlement in which Russia holds a strong veto on internal processes.

It should be remembered that Russia is facing a bunch of complex and dangerous challenges on its borders. Any one of them might spin out of control. And like all nations, Russia has limited bandwidth. Moscow is clearly trying to move sequentially, rather than simultaneously, but that assumes it has time. And since the U.S. is unlikely to act, time may well be on Moscow’s side. But Russian fears feed on themselves and can cause imprudent actions. And most important, in managing regions that host enemies, a defining crisis can arrive without invitation.

Russia, from its point of view, has to at least mitigate the threats of the Soviet era. So the pressures on Russia are great, but there are plenty of opportunities to act. Russia tends to move deliberately, but reality might not give it the option. The Americans are, among other things, unpredictable these days.

The Republic of COVID-19