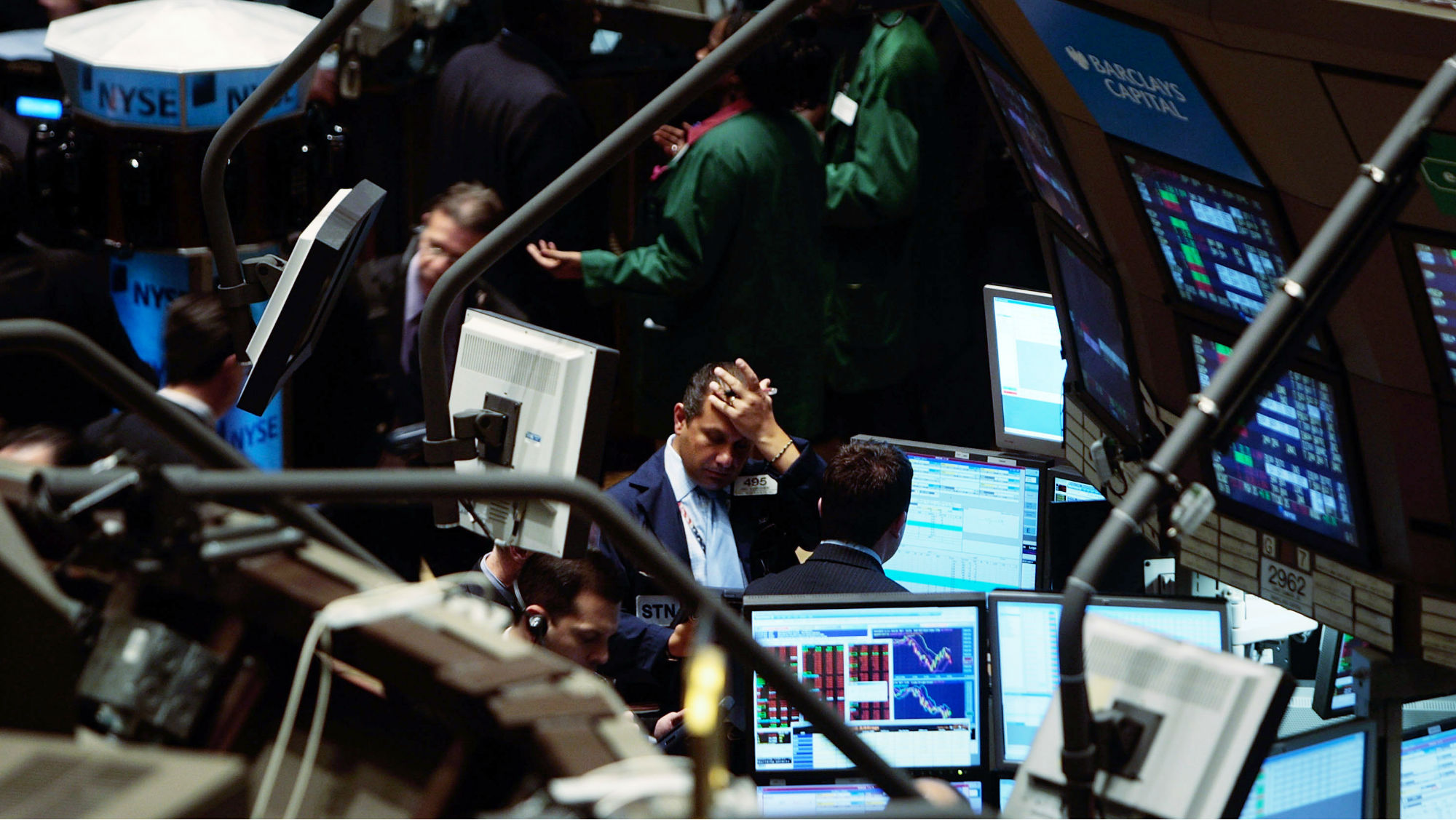 Before we begin, I’d like to offer a hearty thanks to the thousands of you who responded to the survey we issued last week. If you haven’t responded yet, don’t worry – there’s still time. The goal of the survey is to figure out what you, the readers, want to read. At the end of the month, we’ll produce a video series addressing the top three topics you have chosen. You can access the survey and let us know what’s on your mind by clicking here. Thank you in advance for your time and your thoughtfulness, and to those of you celebrating in the US or in the world, Happy Thanksgiving.

Though the frontrunners are becoming clear, there are several other subjects many of you have expressed interest in that we don’t want to ignore. One of these topics is the US economy. Specifically, some of you wanted us to analyze the economy in the context of George’s forecast in “The Next 100 Years”: that a major economic and social crisis revolving around the decline of the American middle class will happen sometime in the early to mid-2020s.

In truth, we had planned to dive into this subject before we even issued the survey. For all the optimism surrounding low unemployment rates and record-high real median income, there are some signs that something is rotten in the US economy. This isn’t wholly surprising – economic health tends to be cyclical, and the US is due for a recession. But when the next recession comes, there’s reason to believe it won’t be business as usual. The structural problems that led to the 2008 financial crisis haven’t been fixed. If anything, they’ve gotten worse.

In January, we forecast that the signs of just such a recession would emerge by the end of the year. And emerge they have. The yield curve between short-term and long-term US Treasuries is the flattest it has been at any point in the past 10 years. One of my colleagues, Xander Snyder, wrote an excellent piece last week on this very subject, and I encourage you to familiarize yourselves with it if you have not already done so.

A flattening yield curve, as he points out, is a problem in its own right, as is a declining prime-age labor force unable to secure adequate wages. But there are other longer-term forces at work that threaten to make what should be a minor cyclical recession a much more painful and prolonged affair. The two most consequential of these forces are increases in total household debt and the continued growth of wealth inequality within the US economy.

Household debt in the United States is now almost $13 trillion. That figure exceeds total household debt at any point during or in the recovery period after the 2008 financial crisis. Housing debt has creeped back to pre-2008 levels. Credit card debt has reached pre-2008 levels too. Student loan debt has skyrocketed by 134 percent since the first quarter of 2008 (about 9 percent on average per year). 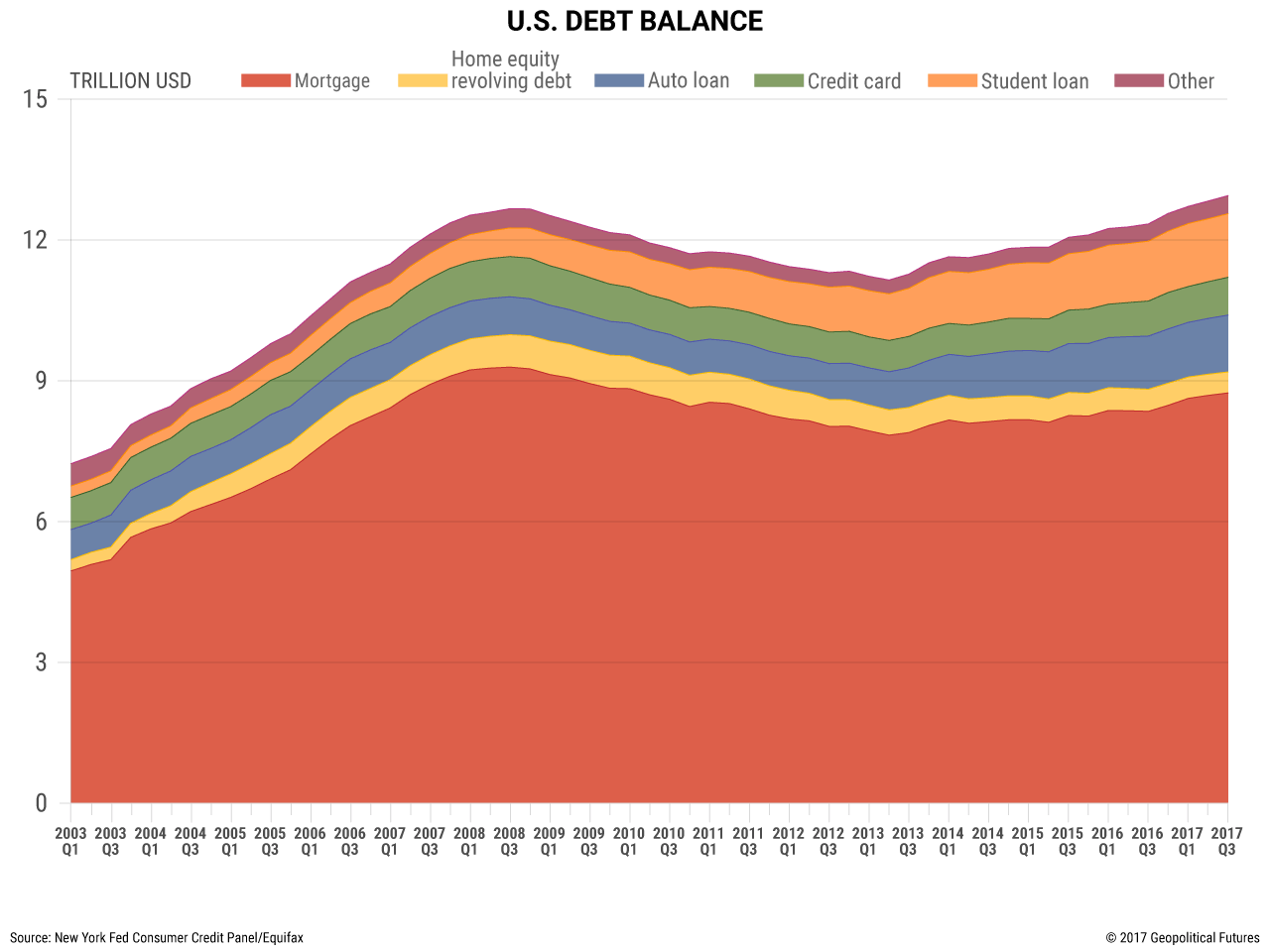 Increased household debt, though, doesn’t mean the end is nigh; it just means people are borrowing more money. Still, problems arise when people default on credit card and consumer loans. In the second quarter of 2017, the delinquency rate on credit card loans was 2.47 percent and on consumer loans was 2.21 percent. Low though these rates may be, they are trending upward. Last month, shares of JPMorgan Chase and Citigroup fell on the news that both banks had increased their reserves for consumer loan losses – just under $300 million for JPMorgan Chase and just under $500 million for Citigroup. Put simply, American consumers are beginning to spend beyond their means. 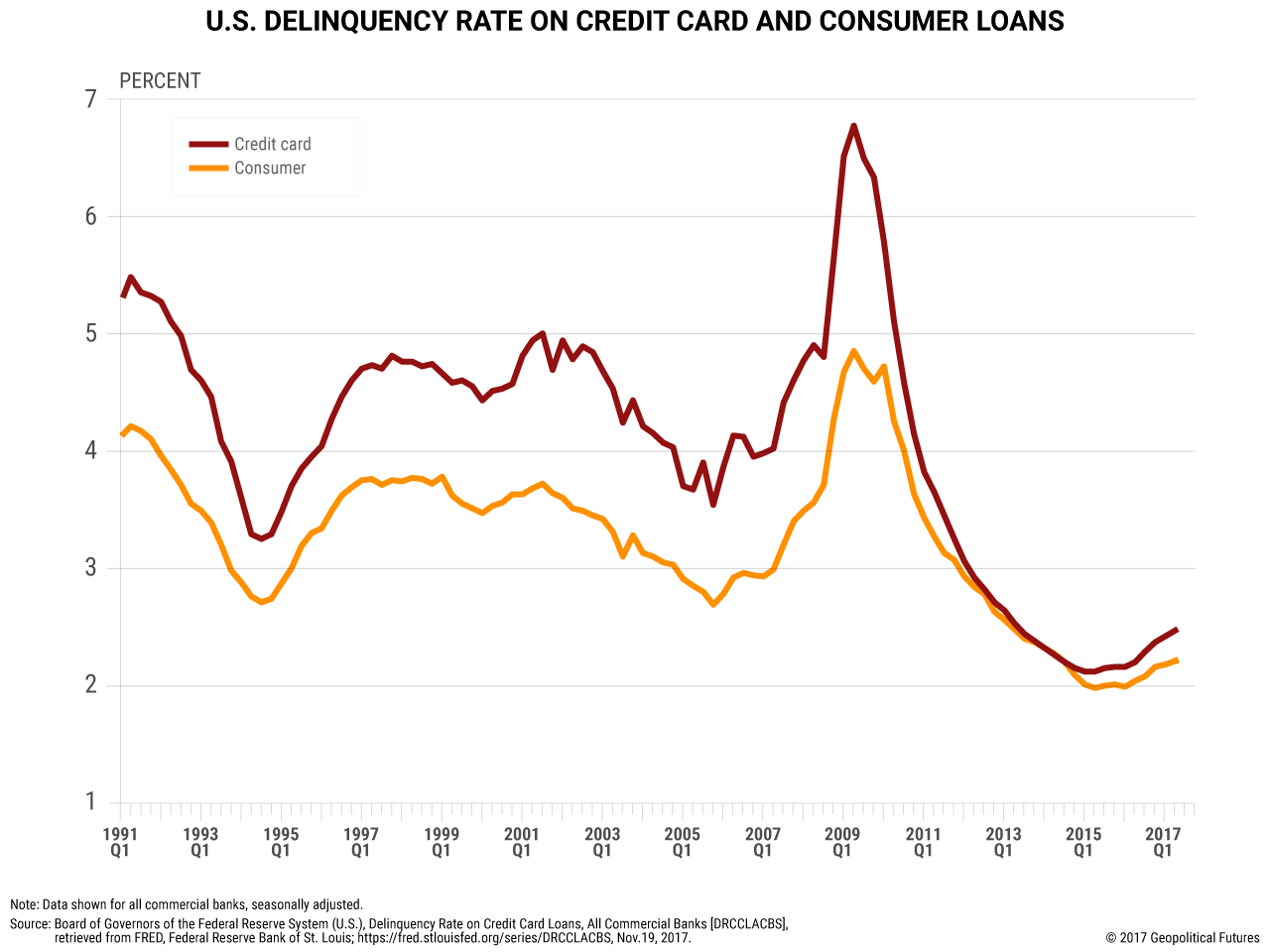 More serious than higher household debt, though, is increased income and wealth inequality in the United States since the 1970s. In 2015, the top 10 percent of all US earners accounted for just under 49 percent of total income – a share greater than at any time during the Great Depression. The top 1 percent accounted for 20 percent of total income. This kind of disparity is a refrain in US economic history. It characterized the Gilded Age of the late 19th century as well as the decade or so before the Great Depression. Both were eras of immense wealth generation that benefited only the top, and both were rampant with speculation – the railroads and oil in the Gilded Age, the stock market in the Roaring Twenties. Today’s inequality is statistically more pronounced than during both of those times in history. 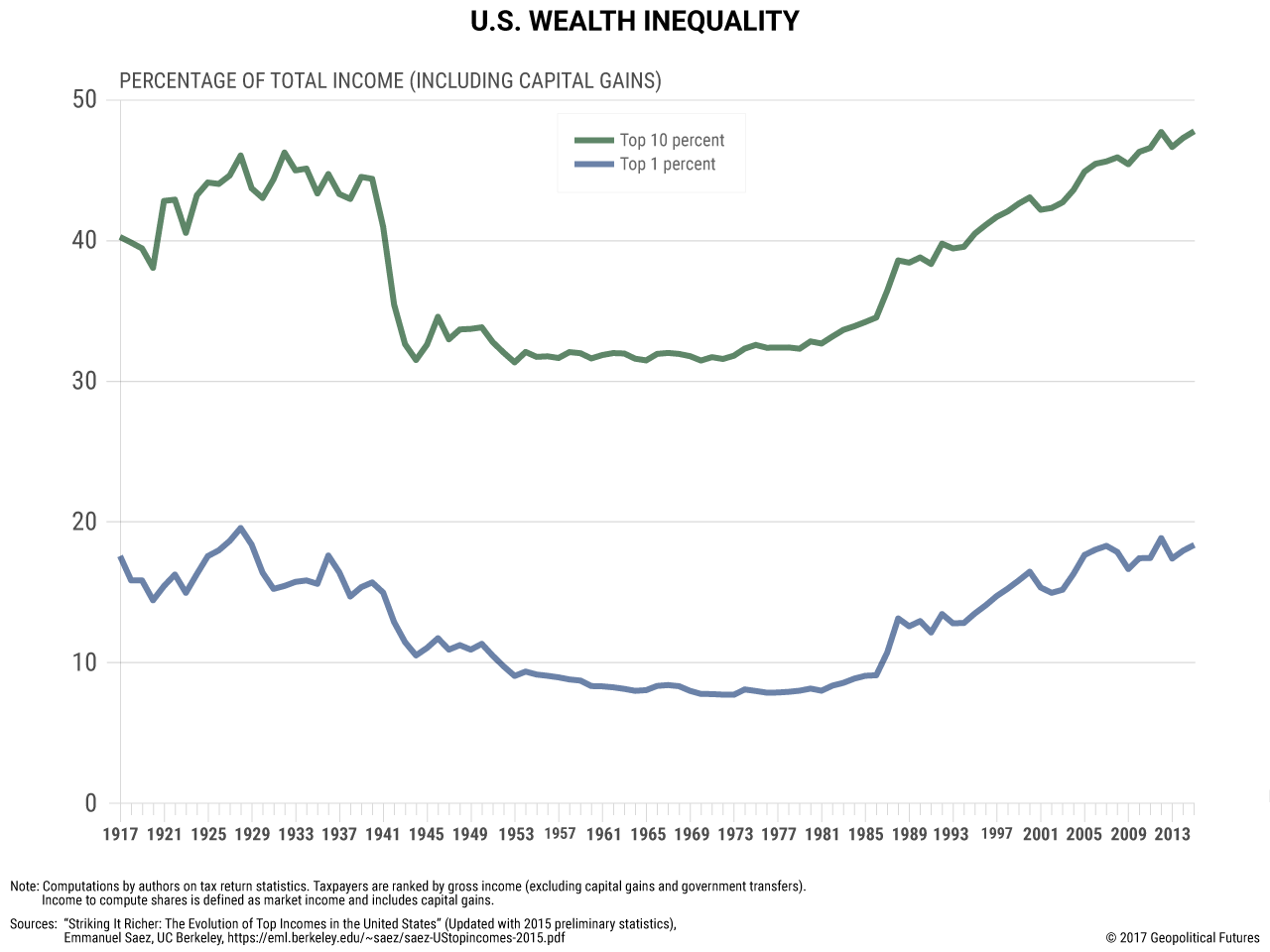 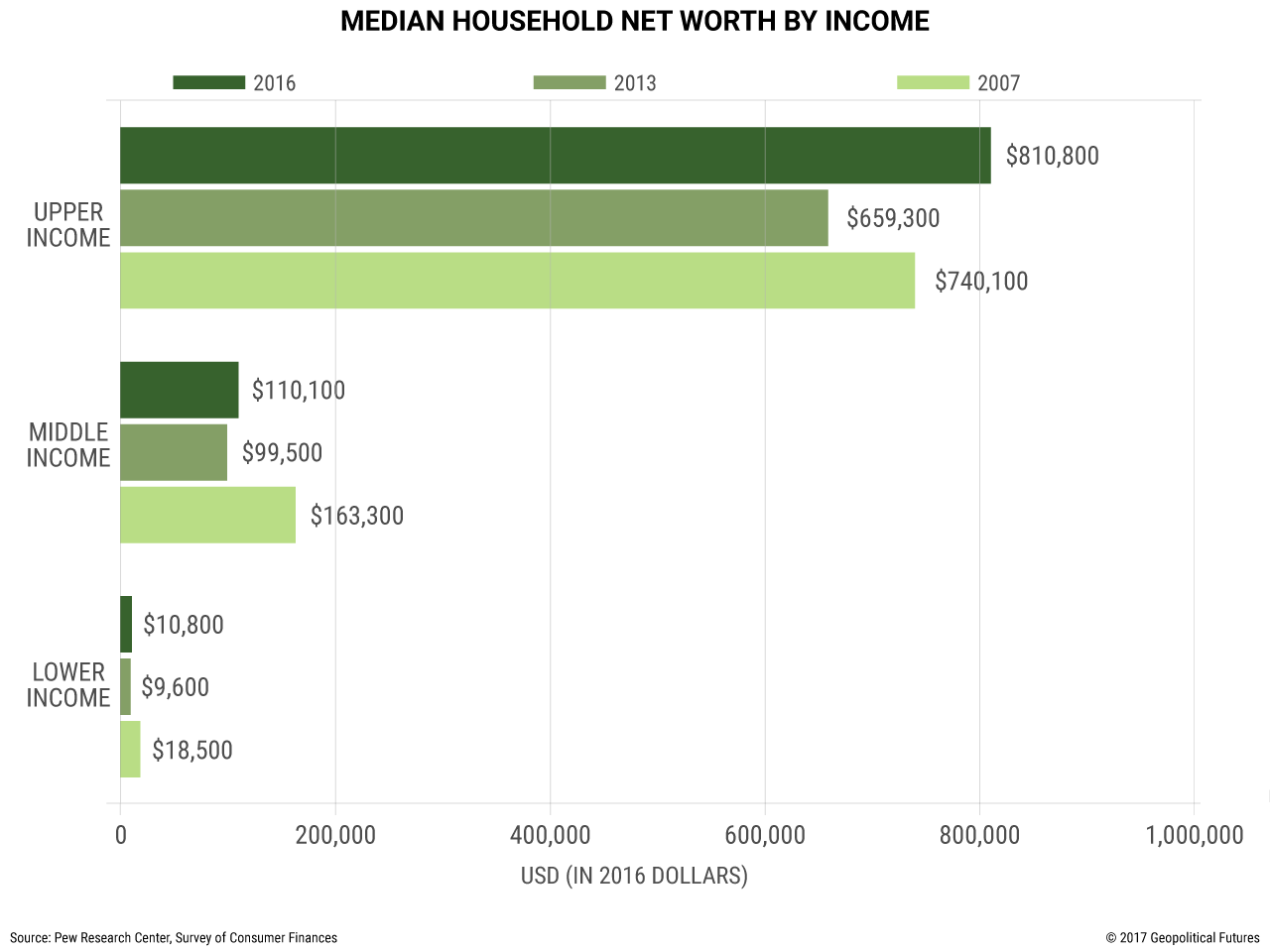 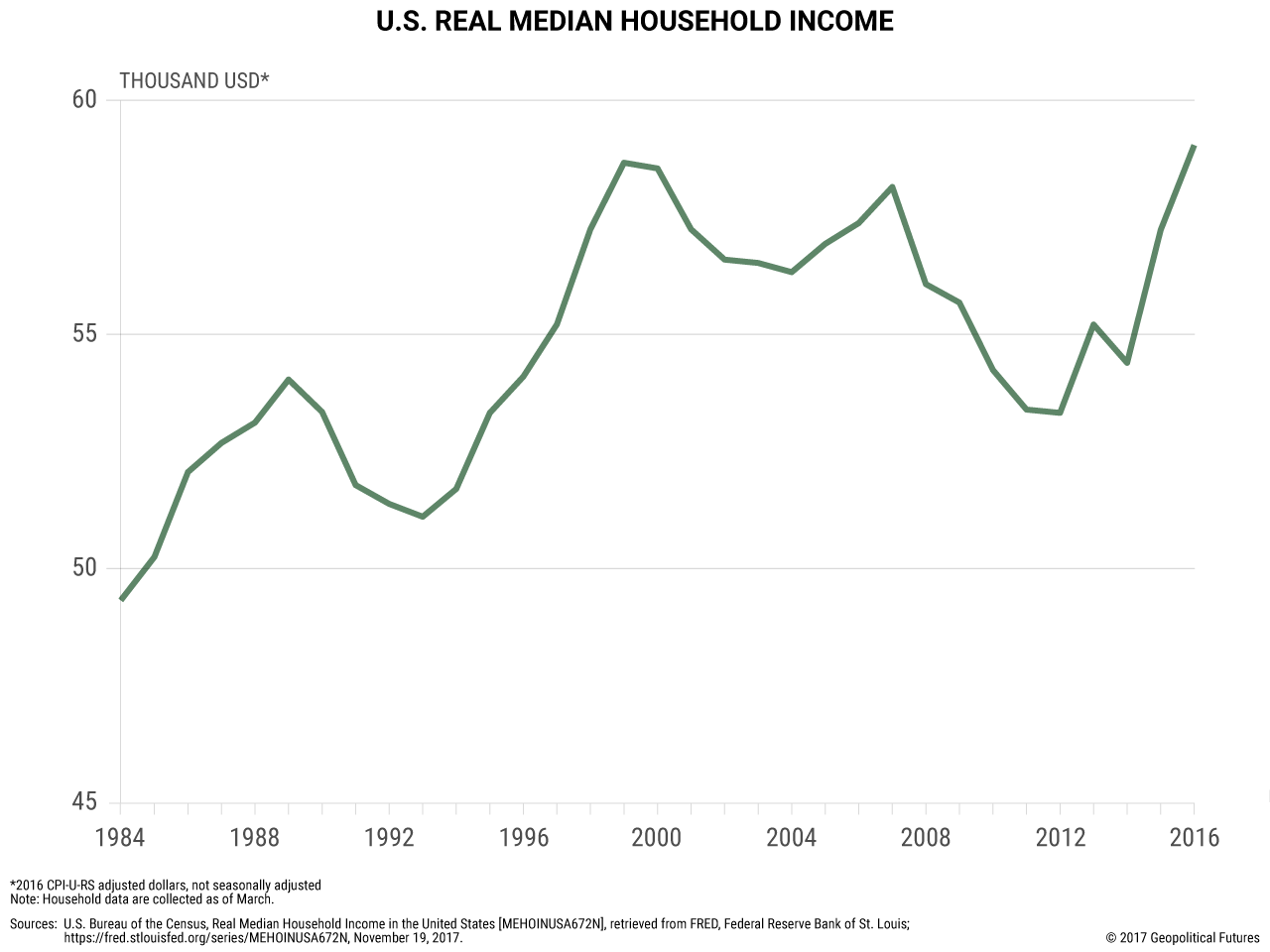 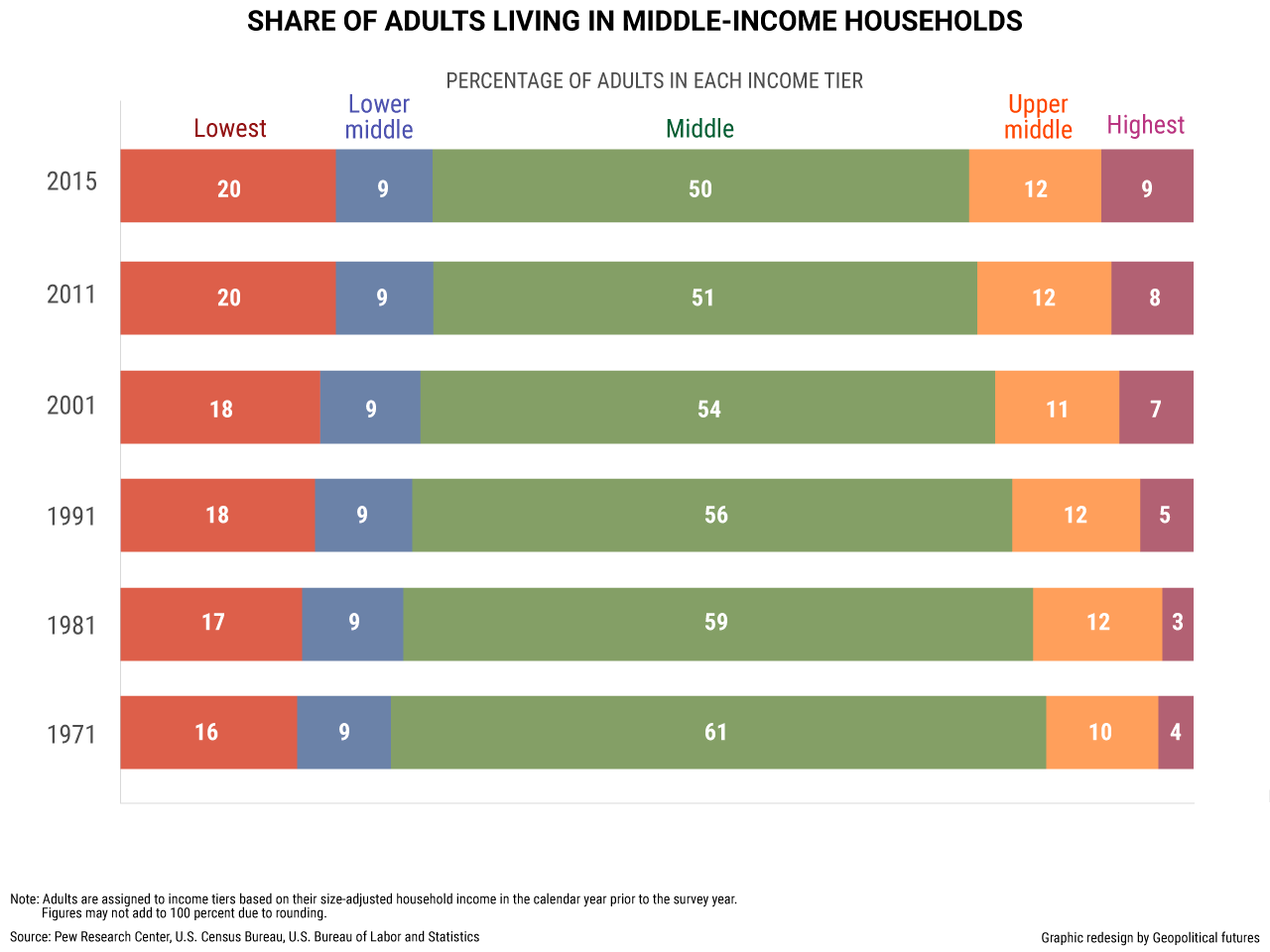 And in 2017, real median income doesn’t go nearly as far as it used to. In the 1950s, the median cost of a home was a little more than double a family’s average annual income. A car was just under half of a family’s average annual income, according to data from the US Census Bureau and the US Department of Commerce. Today, it costs an average family about four times its average income to buy a house, and almost two-thirds its annual income to buy a car. A majority of households in the 1950s, moreover, were single-income households. By the end of that decade, the husband was the sole income generator for 70 percent of American households. Analysis performed by Pew in 2015, based on the last US census, estimated that in 2012, 60 percent of American households were dual-income households. The purchasing power of the real median income has decreased even as US households have added a second breadwinner to the home.

For the past 40 years in the US, the rich have been getting richer, the poor have been getting poorer, and the middle class has been disappearing. The crisis of 2008 was a global phenomenon, but in the US, it was also an episode in an era of increasing inequality that began in the 1970s. The American dream was never about just making ends meet – it was about social mobility and giving your children a better life than you had growing up. That is beyond the means of an increasing number of US households. When the next recession comes, it will come as inequality reaches new heights, and if US history is any indication, that will translate into massive political change.