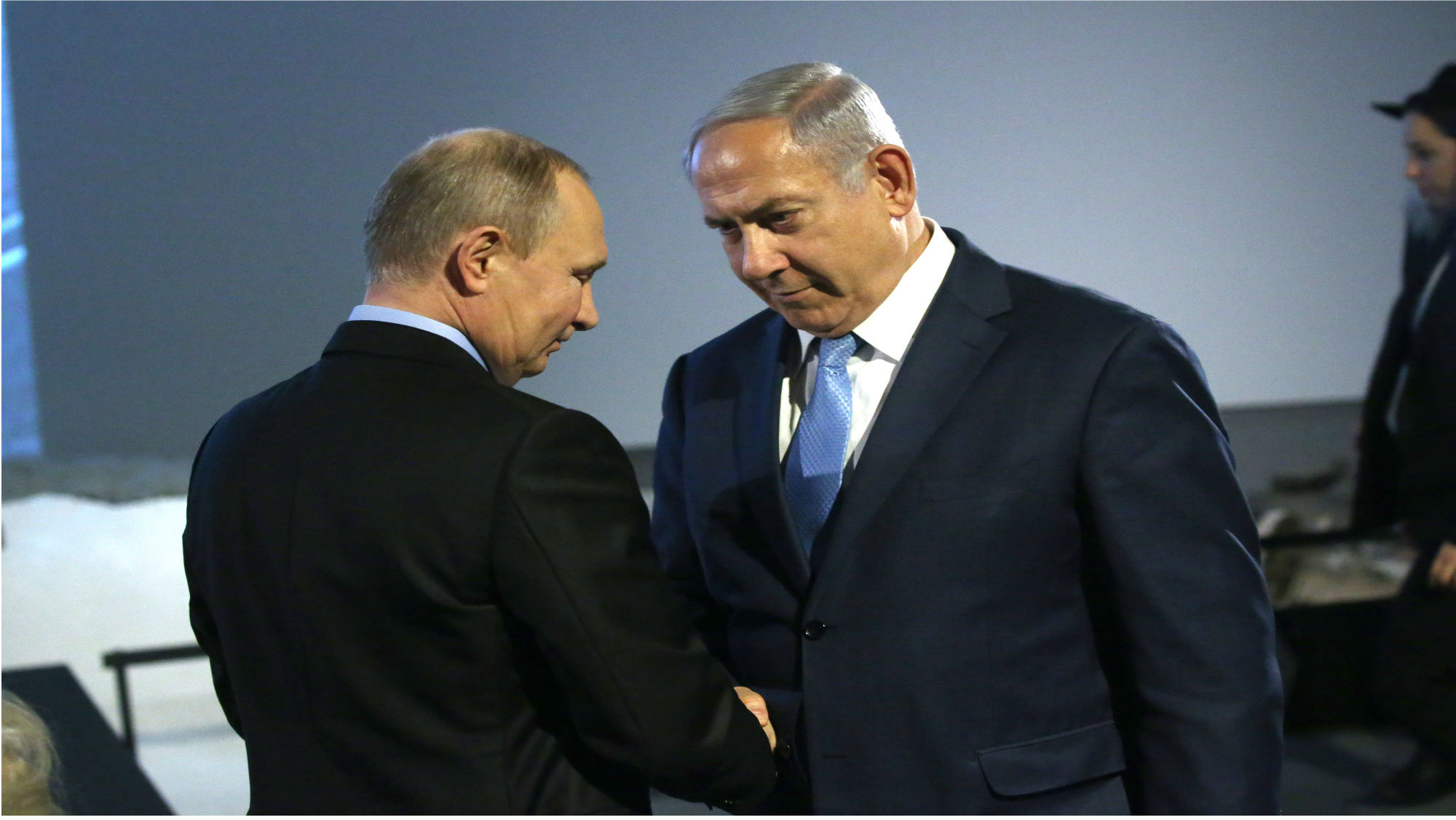 Israeli Prime Minister Benjamin Netanyahu met with Russian President Vladimir Putin in Moscow on Jan. 29 and told Putin that Iran is trying to turn Lebanon into a vast missile manufacturing base. I have written on the rise of Iranian power following the defeat of Islamic State forces in Iraq and Syria, and have raised the question of how Israel and Turkey will respond to Iran’s emergence as a major power in the Arab world. We are now beginning to see the Israeli response.

Netanyahu had told Putin when Russia intervened in Syria that Israel understood Russia had interests in Syria and would not interfere with the Russian presence there. He also told Putin that Israel too has interests in Syria and that chief among them is limiting the Iranian presence. The implication behind that statement was that Netanyahu was going to Moscow to call in his chits.

Israel’s strategic imperative is, above all, to avoid a war with all Arab powers at the same time. Israel’s army is limited in size and ability to absorb casualties in a war along the country’s entire periphery. The nightmare scenario for Israel is far from materializing. Egypt has no interest in fighting Israel and is cooperating against jihadists in Sinai. Jordan remains dependent on Israel for its national security. Until recently, Israel was more secure than it had ever been. In addition to security along its Jordanian and Egyptian borders, Syria was in chaos and Hezbollah was fighting in Syria. That meant that neither Syria nor Lebanon posed a threat, and that Israel’s entire periphery was secure.

The defeat of opponents of the Assad regime has changed Israel’s strategic reality. It is not simply the Russians operating in Syria, but also the Iranians, both directly and through their Lebanese proxy, Hezbollah. Hezbollah forces supporting the Assad regime were severely weakened during the fighting, taking heavy casualties. Now that the fighting has subsided, Hezbollah has been working hard to rebuild its strength, supported by Iran. Separately, Hezbollah in Lebanon is focused on Israel. Therefore, Israel, which fought a war with Hezbollah in 2006, now has to view Lebanon, and Syria as well, as an evolving Iranian base.

The war in 2006 did not go particularly well for Israel. Hezbollah proved a capable defensive force, holding a line against an Israeli assault on its positions in southern Lebanon, and also firing rockets deep into Israeli territory. Hezbollah came through the war relatively intact, while Israel had to reconsider its military doctrine. The Israelis have no desire to repeat 2006, even with a new doctrine. On the other hand, Israel cannot afford a rocket and missile barrage from Lebanon. Although Hezbollah and the Iranians have had ample time to build structures to protect the rockets and missiles, an air campaign by Israel is unlikely to destroy all of them. Meanwhile, an Israeli military incursion into Lebanon would be difficult to execute.

Therefore, Netanyahu’s visit to Russia makes perfect sense. Since Israel did not intrude on Russia in Syria, it is now Israel’s turn to ask Russia to rein in the Iranians, which Russia won’t necessarily accede to. The problem is Russian strategy. Russia has achieved its main strategic purpose: It has demonstrated that it is capable of fighting an extended war at some distance from the homeland. It was not a vast war, and the Russian role in the victory was partial, but it achieved its goal of appearing powerful and therefore the mission was a success. Russia now faces the problem that all powers face when they fight wars primarily to demonstrate their power: What does it do now that it has won?

What the Israelis are asking for is that the Russians take away from Iran what it had fought for in Syria. This would be no easy task. The Syrian war, from Iran’s point of view, was part of a broader strategy to become a major and even dominant power in the Arab world. It achieved a powerful position in Iraq, Syria and Lebanon and a significant presence in Yemen. Iran had gone from being relatively isolated in the region to being a significant presence, although not yet a dominant power.

If the Russians were to do what the Israelis want, they would be asking the Iranians to accept a limited presence in what, to them, is a strategic region. But the question is: Can the Russians block the Iranians without hurting their own strategic interests in the country and the region? Iran has other uses for the Russians. Foremost, the Iranians pose serious problems for the Americans. The foundation of U.S. strategy in the Arab world is the Arab monarchies in the Arabian Peninsula. Most of these, Qatar excepted, are terrified of Iranian power, particularly at a time when oil prices are still not high enough to make up for the years of shortfall. These regimes have internal problems that Iran can exploit. They do not want to see the United States accommodate the Iranians. Therefore, the U.S. needs to pick minor confrontations with Iran to placate its Arab allies. The more the U.S. does this, the more Iran needs Russia. An Iranian-Russian alliance would be a potent tool.

The Israelis have always warned about Iran’s nuclear capability, and their concern was understandable. But nuclear weapons were not Iran’s primary interest because it understood that those weapons were not usable. The real threat from Iran was Tehran’s intelligence capabilities in terms of being able to support proxies in different Arab countries. The Israelis had seen the war in Syria as fragmenting and neutralizing Syria. They did not expect it to end with Iran in such a strategic position in conventional terms.

The Complexity of the Middle East

This poses a serious problem for Israel. It also poses a serious problem for Turkey. Whatever temporary arrangement Turkey has with Russia and Iran, no Turkish relationship with either is stable. The Russians have been historic enemies of Turkey in the Caucasus, and in the end, this is a region where Russian interests will not go away. And the Turks have historically dueled with Iran over the domination of the Arab world. For the moment, Turkey is focused on the Kurdish threat to its territorial integrity. However, in the long run, allowing Iran to solidify its position around Turkey’s borders pits a manageable problem — the Kurds — against a potentially unmanageable problem — the Iranians and the Russians.

Russians might indicate a willingness to cooperate with the Israelis to limit the Iranians, but will do nothing decisive. The United States has no appetite for getting seriously involved in any of this, but will be content to hold its position on the Arabian Peninsula while dueling with Iran. If this problem is to be solved for Israel, the trip Netanyahu will have to make will be to Ankara, not Moscow. Netanyahu undoubtedly knows this, and discussions with the Turks are underway, but each country wants the other to take the first risk.

Given this situation, Iran’s position should solidify. The one weakness in this scenario is Iran’s internal situation. In the wake of Iran’s recent unrest, the magnitude and purpose of which is still somewhat obscure, the classic question rises: Does Iran have the domestic base to support its foreign adventures? At the moment, the answer appears to be yes.

For Israel, the period of strategic invulnerability is ending. The willingness not to interfere with the Russians has created a threat Israel did not anticipate. The presence of the Iranians not only in Lebanon but also in Syria opens the door for conflicts Israel lived happily without. As this unfolds, the place to watch is Lebanon. Torn by civil war in the 1980s, the possibility of another civil war is increasing. As that danger increases, Russia faces the problem that anyone who wins a war in the Middle East faces: What should it do with the next war? Russia has won the first, but easy, round. The next one gets harder.

On the Black Sea