Last week, EU Internal Market Commissioner Thierry Breton announced that Brussels will propose new rules to ensure the safety of supply chains during crises. Supply chain security is an indispensable goal for any economy, but it’s even more urgent for the European Union because its Green Deal – the plan to achieve carbon neutrality by 2050 – relies on raw materials that are produced outside the borders of the bloc.

Even if it’s not the most advertised aspect, one of the main purposes of the Green Deal is to reduce Europe’s dependence on natural gas – and thus on Russia, its main gas supplier. As relations with Russia have deteriorated, the prospect of decoupling energy security from foreign powers appeals to most EU states. The reality, however, is that even if fully implemented, the Green Deal wouldn’t solve the problem. To make the EU greener, Brussels will need to implement an array of green technologies with unique supply chains that rely heavily on rare earth materials. So as the EU aims to wean itself off Russian gas, it runs the high risk of becoming more dependent on other foreign powers, namely China.

The Green Deal and Energy Security

The European Green Deal targets a 55 percent reduction of greenhouse gas emissions (relative to 1990 levels) by 2030 in order to achieve carbon neutrality by 2050. It does so through an array of measures to cut pollution and, at the same time, increase research and investment in green technologies. Currently, the European Union is highly dependent on fossil fuels, which account for approximately three-quarters of the bloc’s energy supply. The EU’s energy mix is composed of 36.3 percent total petroleum products, 22.3 percent natural gas, 12.7 percent solid fossil fuels and 13.1 percent nuclear energy. Renewables account for just 15.5 percent.

Europe’s energy security hinges on external actors. Largely devoid of energy resources of its own, the EU imports 87 percent of the oil and 74 percent of the natural gas that it consumes. But this also means that any shift by Europe away from fossil fuels will be felt beyond its borders, particularly in Russia. Of Moscow’s fossil fuels exports, close to half were destined for the EU. At the same time, the EU imports 48 percent of its natural gas needs from Russia. It’s safe to say, in other words, that EU energy security depends on Russia.

But the Green Deal will not eliminate Europe’s energy security risks. On the contrary, it will just alter the foreign powers on which the EU depends. European carbon neutrality can be achieved only through the widespread adoption of green technologies like lithium-ion batteries, fuel cells, wind turbine generators, traction motors and photovoltaics. Traction motors and lithium-ion batteries, for example, are crucial for manufacturing electric vehicles. Fuel cells are used to convert hydrogen to electricity without combustion. And photovoltaics convert solar energy into electricity and, along with wind energy, will be a critical part of achieving carbon neutrality.

Manufacturing these technologies requires critical raw materials such as lithium, graphite, cobalt, titanium and rare earth elements like dysprosium, neodymium and praseodymium. But Europe’s industry and economy rely on the global market, especially China, for the supply of these materials. In fact, at least 98 percent of Europe’s supply of rare earths comes from China. China currently produces 80 percent of the world’s supply of neodymium and 99 percent of all dysprosium, and it has the largest reserves and is the leading producer of praseodymium. All three elements are crucial for manufacturing wind turbine generators and traction motors. Moreover, China is the largest manufacturer of lithium-ion cells, accounting for 66 percent of global production, and is home to 45 percent of the global lithium refining facilities. China also has the largest share (20 percent) of the raw materials required for fuel cells technology. Furthermore, Beijing produces between 85 and 90 percent of the world’s neodymium-iron-boron magnets, which are used in electric vehicle motors. Finally, China dominates the supply chain for manufacturing photovoltaics: In 2019, for instance, eight of the top 10 companies in the crystalline silicon cells manufacturing sector were Chinese. 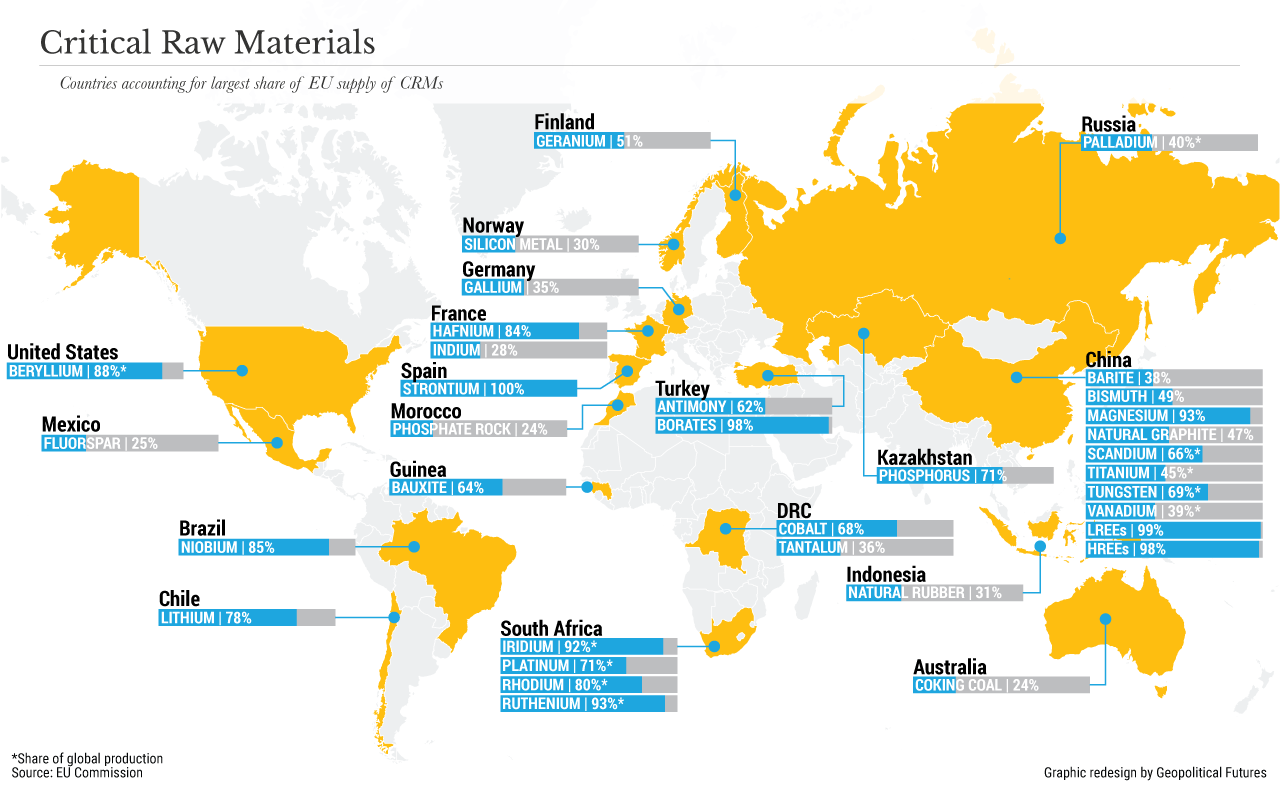 The European Commission, the bloc’s executive arm, has laid out a list of critical raw materials that it updates and revises every three years. For something to be considered a critical raw material, it must be essential for industry, modern technologies and green technologies. Certainly, not all raw materials that the commission lists as critical come from China: The EU relies on Chile for its lithium supplies (78 percent of its needs) and on the Democratic Republic of Congo for cobalt (68 percent) – which are used to produce fuel cells and lithium-ion batteries. But Beijing remains the most relevant EU supplier of critical raw materials essential for the green transition. In fact, China is the EU’s largest supplier of graphite (47 percent) and titanium (45 percent) – both of which are necessary to produce lithium-ion batteries and fuel cells – not to mention the rare earths discussed above. Alternate suppliers of neodymium and praseodymium might be found in the U.S., Brazil and Australia, and Vietnam has dysprosium. But for the EU, China is still the main supplier. Further, given that the European Commission forecasts that raw materials demand will double by 2050 – growing exponentially especially from 2030 – it’s fair to say that the bloc’s dependence on China is destined to increase at a similar pace.

This dependence on China puts the EU in uncharted waters. The pandemic underlined the importance of secure supply chains, and one of the EU’s challenges going forward is to mitigate these vulnerabilities. But the goals of the Green Deal and implementation of the green transition clash with Europe’s need to reduce its overdependence on foreign players. In other words, Europe’s supply chain may remain vulnerable, and placing the future of the EU Green Deal – and thus EU energy security – in foreign hands is a high-risk gamble.

The European Commission’s Joint Research Center classifies the supply of rare earth elements as the highest risk because of China’s dominance of the supply chain. And Beijing has already demonstrated that it isn’t afraid to wield its newfound power. In 2010, for instance, China cut off Japan’s supply of rare earths during a trade dispute. Brussels is acutely aware of the risk, and in September 2020, the European Commission launched an industrial alliance to make the bloc more resilient and autonomous regarding the raw materials value chain. The so-called European Raw Materials Alliance is intended to boost domestic production of raw materials and identify both investment opportunities in the sector and potential bottlenecks in the supply chain. Specifically, the EU aims at increasing its autonomy in mining, extracting and refining the raw materials needed for green technologies. Sweden, Finland, Germany and Spain are potential sites of mining activity.

But it’s still unclear how the bloc plans to cut its external dependencies. To be sure, the EU has some modest domestic supplies: It already produces 35 percent of the world’s gallium, 51 percent of its germanium and 28 percent of its indium, all of which are common in the development of green technologies, especially photovoltaics. The bloc is also fully self-sufficient in strontium, which is necessary to make fuel cells. But Europe doesn’t possess all the needed raw materials, and its domestic supply is currently unable to meet domestic demand – which will only increase as the green transition proceeds.

The best alternative, then, is for the EU to diversify its suppliers. Besides the previously mentioned Chile and Democratic Republic of Congo, the EU relies on Norway for silicon and Brazil for niobium (necessary for lithium-ion batteries). Russia and South Africa provide it with palladium and platinum, which are necessary for fuel cells. After China and its 44 million metric tons, the largest reserves of rare earths are located in Vietnam (22 million), Brazil (21 million), Russia (12 million), India (6.9 million) and Australia (4.1 million). Expanding partnerships, agreements and participation in exploration with these partners is one option for Brussels to reduce its dependence on China in this area. A European Commission vice president has said the bloc intends to do just that. Given China’s current domination of the rare earths supply chain, however, Beijing holds most of the cards at the moment. Brussels could also try to increase its recycling capabilities so as to reduce its reliance on foreign supplies – and indeed it is trying to do this as well – but the impact of such a move is likely to remain limited.

Relations between the European Union and China have been in a rough patch since the beginning of 2021, when the investment deal between Brussels and Beijing – known as the EU-China Comprehensive Agreement on Investment – was delayed amid a spat over China’s alleged human rights violations in the Xinjiang region. More recently, tensions soared again when Lithuania let Taiwan open a de facto consulate in the country, sparking a diplomatic row with Beijing. This doesn’t bode well for the future of the bloc’s green transition, as the demands of its Green Deal will clash with its political and economic interests.

The European Green Deal is an ambitious program driven mainly by good intentions: Brussels wants to set a good example, hoping others will follow its path. But in the international system, good intentions are meaningless even in the best of times. In a worst-case scenario, they might be turned against the bloc. The EU will have to face the consequences of greater dependence on China and on a fragile supply chain, which might translate into shortages of critical raw materials, jeopardizing the economic and political sustainability of the green transition.