There is much discussion about the surging Chinese economy and the expanding international influence of China. There is no question that China’s economy has consistently expanded in the last 40 years, since the death of Mao Zedong. But Mao had created an extraordinarily poor China, based on ideology and the desire to eliminate the power of the old economic elite that was concentrated along the coast. Mao feared them as a threat to the revolution. In fact, he feared the bourgeois tendency toward wealth and comfort as a challenge to the revolution. He throttled the Chinese economy, and as a result, virtually any rational behavior by Chinese rulers would generate dramatic growth. China, with a vast potential workforce and a basically sophisticated culture, inevitably surged by shedding the malevolent and strange grip of Mao.

Forty years later, under a reasonably rational political structure, China has surged to being one of the largest economies in the world, second only to the United States. The gap between the U.S. and China is still substantial, with China’s gross domestic product at only 70 percent of the United States’. This is of course much narrower than 40 or even 20 years ago. Still, it is a substantial gulf. But GDP represents the aggregate production of a nation, and from an aggregated point of view, China’s $14 trillion economy is a miracle.

But it is simply not the miracle it seems to be. One measure of an economy among many is GDP, the economy as a whole. Another way to look at an economy is per capita GDP, the aggregated divided by the population. This gives a sense, imperfect but useful, of how Chinese citizens are faring compared to citizens of other countries. Looking at the economy as a whole, China is impressive. In per capita GDP, it is another matter.

There are two ways to measure such things. One is nominal GDP, which is measured against the U.S. dollar, the world’s reserve currency. The other way to measure is purchasing power parity (PPP). This looks at the amount of housing or food that can be purchased for a fixed amount of money. On the surface this is the best way, but it suffers from two defects. One is that in a country as vast as the U.S. or China, the cost of housing or other commodities varies dramatically. Finding a single value for housing – and the myriad other data points – that includes San Francisco and Little Rock, Arkansas, can be done, if you accept that you will be way off lots of times. In addition, these are obviously manipulated for political reasons. Still, nominal GDP and PPP together gives you a good sense of the reality. In per capita nominal GDP, China is ranked 59 in the world, behind Costa Rica, Seychelles and the Maldives. In PPP terms, China is ranked 73, immediately behind Guyana and Equatorial Guinea.

By comparison, the United States ranks fifth nominally, behind Luxembourg, Switzerland, Ireland and Norway. The U.S. is seventh in PPP terms. Per capita GDP tends to be highest in relatively small, socially and ethnically homogenous countries, built around finance or a single high-value commodity. The U.S. is large and socially and ethnically diverse, with a vastly diverse economy. Under the circumstances, ranking fifth in the world is a significant achievement.

China’s rankings of 59 and 73, and the countries it ranks alongside, give you a very different picture of China’s status. On an aggregate basis, it is bested only by the United States. On a per capita basis, it ranks with much poorer Third World countries. So there are at least two ways to look at China: as a world-class economic power and as a Third World country.

It is possible to be both. When we aggregate China’s wealth, it has the ability to shape parts of the global economy as well as build a significant military capability, but when it aggregates economic value, it can do so only by transferring wealth to some sectors of society and away from other sectors. In other words, those who benefit from China’s strategy control and consume much greater wealth than the average GDP. By extension, those not part of this group possess a substantially smaller share. Put in comparative terms, the wealthiest Chinese enjoy a status on par with the wealthiest Americans; most others live worse than someone in Guyana or Equatorial Guinea. 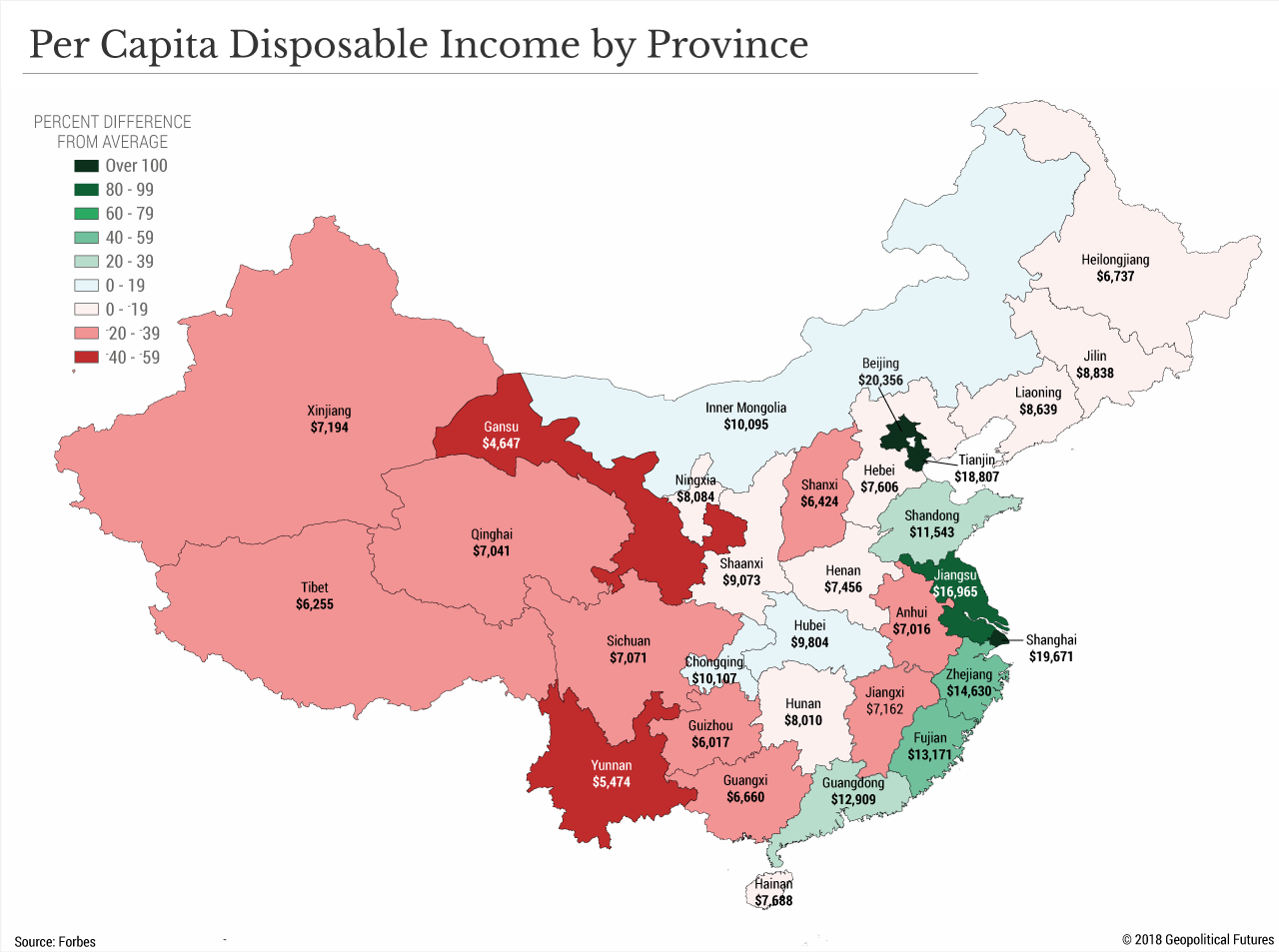 All countries have inequality. It can sometimes have no effect, it can at other times destabilize the country. China has surged by creating a vast and significant economy. The majority of society not part of the coastal elite that manages international trade, banking and investment, or that is part of the military-industrial structure, live lives at least comparable to their equivalents in the United States. The large majority in the interior of the country lead lives on the order of Equatorial Guinea. Few Americans live lives on that order, although undoubtedly some can be found.

Per capita GDP provides an unreal number. But it does allow you to see how a nation compares with its peers. But then you must imagine the degree of inequality required to maintain the aggregate GDP and the manner in which wealth concentrates, and then consider the consequences of living well below the per capita income. In the case of China, it creates a vast but sometimes hard to see mass living like the Third World. In the U.S., also filled with inequality, the excluded still live lives in the context of Euro-American expectations. With exceptions, they do not live below the lives of those in Equatorial Guinea.

Aggregated GDP concentrated for high-tech or finance can have significant power in the world. The risk is social unrest by those excluded. It should be remembered that when Mao failed in an uprising in Shanghai, he took the Long March to the interior to raise a peasant army from those excluded from the wealth accumulating among some engaged in international trade along the coast, and he used that army to overthrow the regime they blamed for their misery. Xi Jinping of course knows the story well, and the crackdown on some of the wealthiest in China, done very visibly, is intended I think to demonstrate the Chinese Communist Party’s commitment to the poor. Whether he can do more of this without damaging the machine that created his country’s aggregate GDP is the question. I may be wrong in my speculation on the nature of his acts, but the fact is that the status of China, by any measure, has bred a wealth equal to the best in the world, and a poverty equal to the worst.

What We’re Reading: Bad Business and the Anti-Bonds